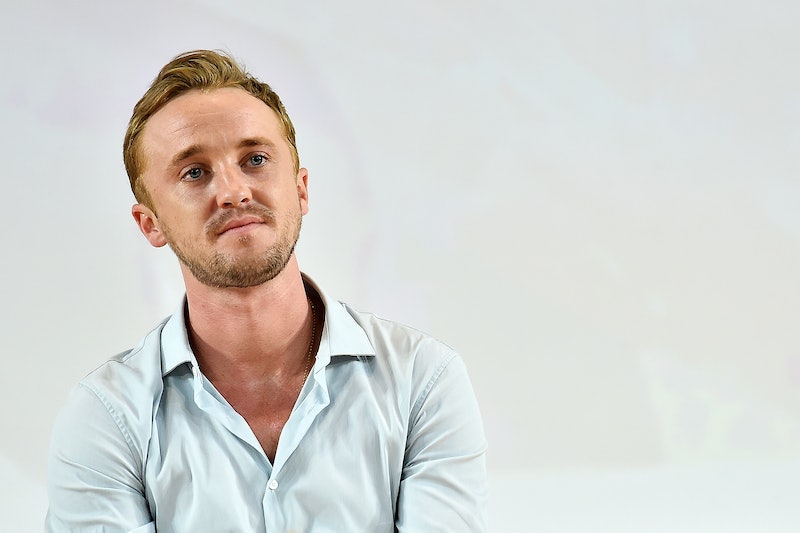 OK you guys, here it is: proof that Harry Potter is the gift that keeps on giving forever, and that I'll never be over it. Tom Felton is a huge Harry Potter fan, the kind that keeps the fandom alive even though it has been years since he played Harry's day-to-day enemy Draco Malfoy. (Someone needed to bother The Boy Who Lived while Voldemort was busy plotting.) Remember the time that Felton tweeted that he didn't think his character Draco Malfoy would be a very good boyfriend? She had tweeted a screenshot of a shirt she had bought that said "Draco Malfoy Is My Boyfriend," and asked him what he thought about it. Your average celebrity might just ignore one more message from an anonymous follower, but Tom Felton is not your average celebrity.

Which he proved by a) retweeting a follower, b) being willing to talk about a character he played, and c) actually looking out for this girl and girls everywhere who find themselves attracted to dudes like Draco Malfoy. In one fell swoop, Felton confirmed for me that, while Draco Malfoy is a nightmare on two legs, Felton himself is not. So, even though we've been warned away from lusting after Malfoy, I don't blame people for carrying a torch for Felton despite the fact that he has a girlfriend. I mean, I'm pretty sure that he'd be an excellent boyfriend for anyone to have, if these traits of his are any indication.

Look at the way Felton deflects attention away from himself and channels it into a compliment for his (fictional) buddy Ron Weasley in that tweet. How can you not love that?

2. He's Got That Harry Potter Money

Sorry not sorry for bringing this up, but the dude is set for life and never has to do another project he isn't in love with — which would make him a very relaxed, attentive partner.

3. He's Buddies With J.K. Rowling Herself

YAS KWEEN. If you asked nicely, he'd probably give you her number so you could send her constant text reminders to write an eighth book in the series.

Not that it's any different from Draco's, but DAMN.

5. He's Not Obsessed With Appearance

Anyone who's willing to dye their hair platinum blond for an eight film franchise has their head screwed on right when it comes to self-confidence.

Felton originally tried out for the roles of Harry Potter and Ron Weasley only to be rejected, but has never shown a trace of resentment about it. Which I think is down to his excellent attitude, rather than the fact that Malfoy is still a plum role.

7. His Father Isn't A Dark Wizard

In the books, Malfoy was an only child, which means his parents never told him no, and sent him down a dark, dangerous, narcissistic path. But, in real life, Felton is the youngest of four, so he grew up with a healthy dose of reality and the ability to share.

You're telling me you don't want a boyfriend who can croon you to sleep at night? You can get right out.

10. He's Not Pals With Goons Like Crabbe And Goyle

Instead, he associates with people like Daniel Radcliffe, Rupert Grint, and Emma Watson. Maybe you've heard of them?

Even though Malfoy himself is clearly a Slytherin, when Felton himself got Sorted, it was into Gryffindor House. Muggles rejoice!

Has been with his current girlfriend Jade since 2008, when they met on a Harry Potter set where she was working as an assistant. So, it's clear the guy doesn't shy away from commitment.

Oh, and in case you didn't gather from the numerous times I've mentioned it, he already has a girlfriend, and has for seven years. That is all the proof I need that I'm right — Tom Felton would be a really killer boyfriend. Because he is! So step aside, Draco Malfoy; real men show respect.