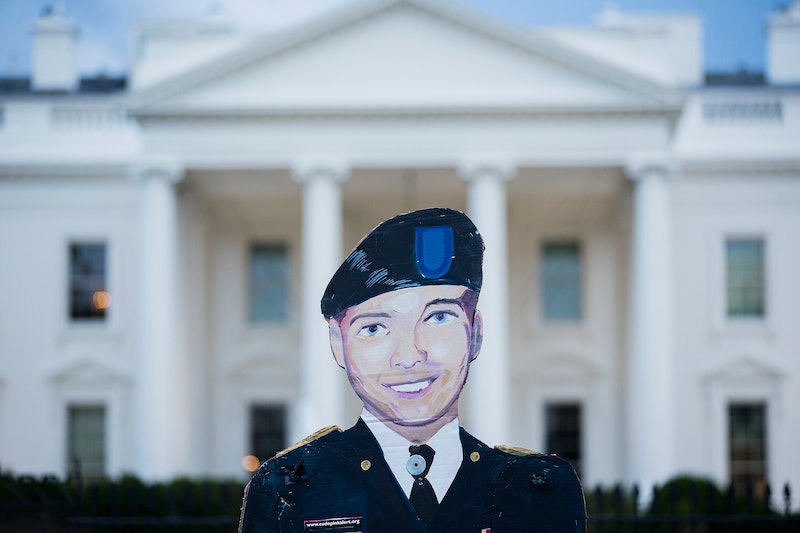 A former US Army soldier serving a 35-year sentence for releasing government intelligence to WikiLeaks has been convicted again. On Tuesday, Chelsea Manning was found guilty of keeping contraband books, magazines, and toothpaste inside Fort Leavenworth. As punishment, the prison will restrict her gym, library, and outdoors privileges for the next three weeks.

Manning insists she received the reading materials legally. But, regardless of how she came to possess them, federal prisons are legally allowed to confiscate and ban those publications they deem "to be detrimental to the security, good order, or discipline of the institution or if it might facilitate criminal activity." Because the regulations are left open to subjective interpretation, Manning's lawyer, Nancy Hollander, would have had a difficult time attempting to prove that any books or magazines her client owned were not subversive. Given that Manning possessed publications centered on criminal justice, information collectives, prison life, and LGBT rights — all issues relating to the prisoner on a personal level — Hollander might have had better odds arguing with a wall.

I'm not trying to be cynical, but I believe that everyone has the right to read, regardless of her criminal background. However, as Marina Koren at The Atlantic points out, prisons may restrict inmates' access to a wide variety of reading materials with impunity. Koren quotes Andrew Losowsky, who wrote in a 2011 Huffington Post article:

Central Mississippi Correctional, for example, is stated as refusing to allow any books whose content includes anything legal, medical or contains violence, while Staunton Correctional in Virginia is claimed only to allow its inmates access to "non-fiction educational or spiritual books."

Losowsky goes on to say that Texas prisons have banned thousands of titles, including "works by George Orwell, William Shakespeare, Norman Mailer, John Grisham and James Patterson, as well as books by two winners of the Nobel Prize for Literature." The restrictions he cites in Mississippi appear to have little reason beyond making it more difficult for inmates to mount a parole defense, while Texas seems bent on making the lives of the incarcerated more unbearable than they already are. Women have a hellish time in prison already, and limited access to reading materials only adds insult to that injury.

The 7 Habits on the Inside by Dean Collinwood

Manning's tweet above indicates she had a "Participant Workbook" of The 7 Habits on the Inside. I couldn't find any such workbook online, but, given the nature of Dean Collinwood's book, I have no doubt it exists. The 7 Habits on the Inside outlines the ways in which prison culture may be changed to reduce the incidence of repeat incarceration. The "habits" the book attempts to nurture in inmates include taking initiative, careful consideration of personal choices, and successful collaboration with others.

Never a dry recitation of art through the ages, Margaret Lazzari and Dona Schlesier's Exploring Art examines creative media through the lenses of religion, sexuality, and politics, among others. The book examines art's significance in our everyday lives, and gives information on how we can — and should — interact with it.

This was difficult to read when it was released last year, and it hasn't gotten any easier. The Senate Intelligence Committee Report on Torture is exactly the same document you read last year, bound into a 526-page tome for easy, non-digital reading. It's no surprise Manning had this book, which details the ineffective use of torture at CIA facilities worldwide.

Compelling People: The Hidden Qualities That Make Us Influential by John Neffinger and Matthew Kohut

What makes Oprah Oprah? How can you influence people, gain their admiration? Compelling People is The Prince for a new millennium. Combining social research and interviews with policymakers, authors John Neffinger and Matthew Kohut have written a guide to cultivating leadership qualities within yourself.

Justice for Hedgehogs by Ronald Dworkin

Don't let the cute hedgie on the cover fool you. Justice for Hedgehogs, like many of the books on Manning's reading list, is pretty dense material. Philosopher Ronald Dworkin's 2013 book, perhaps his magnum opus, is — to quote the oft-used description — an examination of "what truth is, life means, morality requires, and justice demands." If you're not fully intimidated yet, you can read Dworkin's intertwined, all-encompassing theories in Justice for Hedgehogs.

A Critique of Adjudication by Duncan Kennedy

In what Harvard University Press calls a "look into the political nature of legal, and especially judicial, decision-making," Duncan Kennedy has written a treatise on how, exactly, American society — as evidenced by elected officials — shapes our legal system and vice versa. A Critique of Adjudication questions whether the law is, in essence, political, and why and how that came to be.

Hacker, Hoaxer, Whistleblower, Spy: The Many Faces of Anonymous by Gabriella Coleman

It would be inaccurate to say anthropologist Gabriella Coleman infiltrated the hacker-collective Anonymous. She went in openly, with no pretense or misrepresentation, knowing the legion would find out her purposes anyway. Hacker, Hoaxer, Whistleblower, Spy is the result of Coleman's four years with Anonymous, observing target take-downs, the rise of the Occupy movement, and distributed denial of service (DDoS) attacks, and providing a glimpse into the group's inside politics.

Data and Goliath by Bruce Schneier

In Data and Goliath, Bruce Schneier questions whether we've made an unfair deal in relinquishing privacy to the government and corporations in exchange for protection and convenience. This book is a look at how personal data is collected and used — for better or worse — to monitor and catch criminals, sell you products, and provide you with reading material. Schneier provides paths to data-collection and surveillance reform, for those who are interested.

A Matter of Principle by Ronald Dworkin

In a volume much less cuddly looking than Justice for Hedgehogs above, Dworkin examines how the American legal system works by considering individual cases among the larger social and legal framework. For example, if a person acts as a vigilante to avenge a loved one, can — or should — a judge decide to give the defendant a reduced sentence out of circumstantial considerations?

In the same vein as A Matter of Principle, Dworkin explores the process of setting precedence and what, if any, rights individuals have outside of those explicitly provided and protected by legislation. In essence, when is it acceptable — from both legal and moral standpoints — to break the law?

How should judges make decisions in legal cases where there are no explicit right or wrong answers? That's the question Dworkin answers in Law's Empire. The philosopher looks at how judges interpret the law, which interpretations are more correct than others, and what the purpose of the judges' ultimate decisions should be.

If you're looking for an approachable, comprehensive look at the shaping of some of the most important and pervasive qualities of American culture today, you've found the book you're looking for. America: A Narrative History examines how and why political action often begins in bars, how baseball helped to eliminate class distinctions among whites but increased racial tensions by excluding people of color, and how 1950s teen angst was a rebellion against the United States' conservatism.

A Safe Girl to Love by Casey Plett

The only fiction on Manning's reading list is this book: Casey Plett's A Safe Girl to Love. This collection of short stories casts young trans women as protagonists, and follows them through their successes and failures across the North American continent, from a Mennonite enclave in Canada to a gay club in the heart of Brooklyn.

The Whiskey Rebellion by William Hogeland

Whiskey was the first item ever to be taxed in the United States, and the levy caused an uproar. William Hogeland's The Whiskey Rebellion exposes this seldom-discussed people's movement, recounting how it began, proceeded, and was eventually ended by government suppression.

The Artificial River by Carol Sheriff

The Erie Canal was a trade revolution in the 19th century, before trains crisscrossed the American landscape, but how was it received during its construction? In The Artificial River, Carol Sheriff compiles reactions of politicians, laborers, farmers, and industrialists to contextualize the Erie Canal in its time.

I Am Malala by Malala Yousafzai and Christina Lamb

Malala Yousafzai gained worldwide attention when, in 2012, she was shot in the head by Taliban agents for the crime of pursuing an education as a young woman. She survived, thrived, and won the Nobel Peace Prize. I Am Malala is her story, recounting the details of her family life, the effects of terrorism, and the ongoing battle for women's education.

More like this
The UK Government Is *Finally* Banning Conversion Therapy
By Sophie McEvoy
Gen Z Are Twice As Likely To Identify As Queer, According To New Data
By Sam Ramsden
Prince Harry Incorrectly Recites Christina Aguilera’s “Genie In A Bottle” Lyrics
By Jake Viswanath
What The UK Blocking Scotland’s Gender Recognition Bill Means
By Sam Ramsden
Get Even More From Bustle — Sign Up For The Newsletter
From hair trends to relationship advice, our daily newsletter has everything you need to sound like a person who’s on TikTok, even if you aren’t.