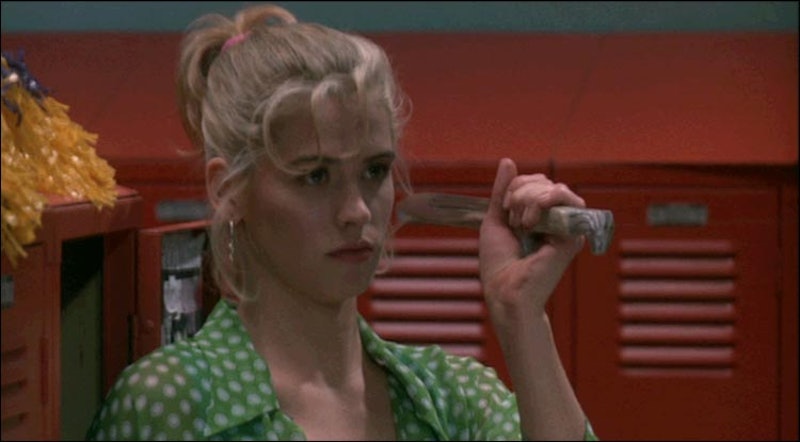 Many of us '90s nostalgics still enjoy a good binge-watching session that involves the hit series, Buffy the Vampire Slayer. Joss Whedon's monster (pun very much intended) success spawned an impressive seven seasons, all which managed to deftly toggle between genres of horror, comedy, action, and romance. While the series' protagonist — played by Sarah Michelle Gellar — exercised some on fleek skills with a stake to rid Sunnydale of demonic baddies each episode, the show also managed to be relatable on a variety of levels. While that earned the series several well-deserved lauds, Buffy's cinematic predecessor didn't receive the same accolades.

In 1992, the Buffy movie was considered both a critical and box office failure. Fortunately, this didn't keep the film from inspiring one of the most notable series of the '90s, and — due to the television show's success — the movie reigns supreme as a cult classic. Many a fan remember that the movie starred Kristy Swanson as Buffy Summers, with '90s heartthrob Luke Perry also at the helm as Buffy's love interest, Pike. However, there were several now-familiar faces that made appearances in the film — including a few A-listers. Some had a generous amount of screen time, while others made uncredited, blink-and-you-missed-it cameos. Thanks to my fandom of the film — and some help from the movie's IMDB page — I have been able to cherrypick some of our favorite actors of today that once held modest roles in this cult classic. Enjoy!

Before he became a Hollywood A-lister, Ben Affleck got super skeeved out by a vampire during a basketball game. I don't blame him.

Remember Seth Green in the Buffy movie? Of course you don't! The actor had a really small role as an uncredited vampire in the film. Fortunately, Green was able to nab a much more memorable role during the television series inspired by the movie, when he was cast as Oz, the lovable werewolf and — briefly — Willow's bae.

It was a family affair! Arquette's sister, Alexis, played an uncredited "Vampire DJ" in the film. Sidebar: An occupation like Vampire DJ definitely should have warranted more screen time — amiright??

The Hairspray star and former talk show host played Charlotte, a role that was uncredited.

Are you properly enticed to take a trek down a road marked nostalgia by re-watching this '90s cult classic? Good, then my work here is done.

More like this
Somebody Convince Soccer Mommy To Make A Metal Album
By Samantha Leach
Kimberly J. Brown & Daniel Kountz Looked Back On Their ‘Halloweentown’ Romance
By Stephanie Topacio Long
All The Sneaky Lindsay Lohan Movie Easter Eggs In Her New Ad, Explained
By Stephanie Topacio Long
The 'Hocus Pocus' Sequel Finally Has A Release Date & It Makes Total Sense
By Shannon Barbour and Radhika Menon
Get Even More From Bustle — Sign Up For The Newsletter