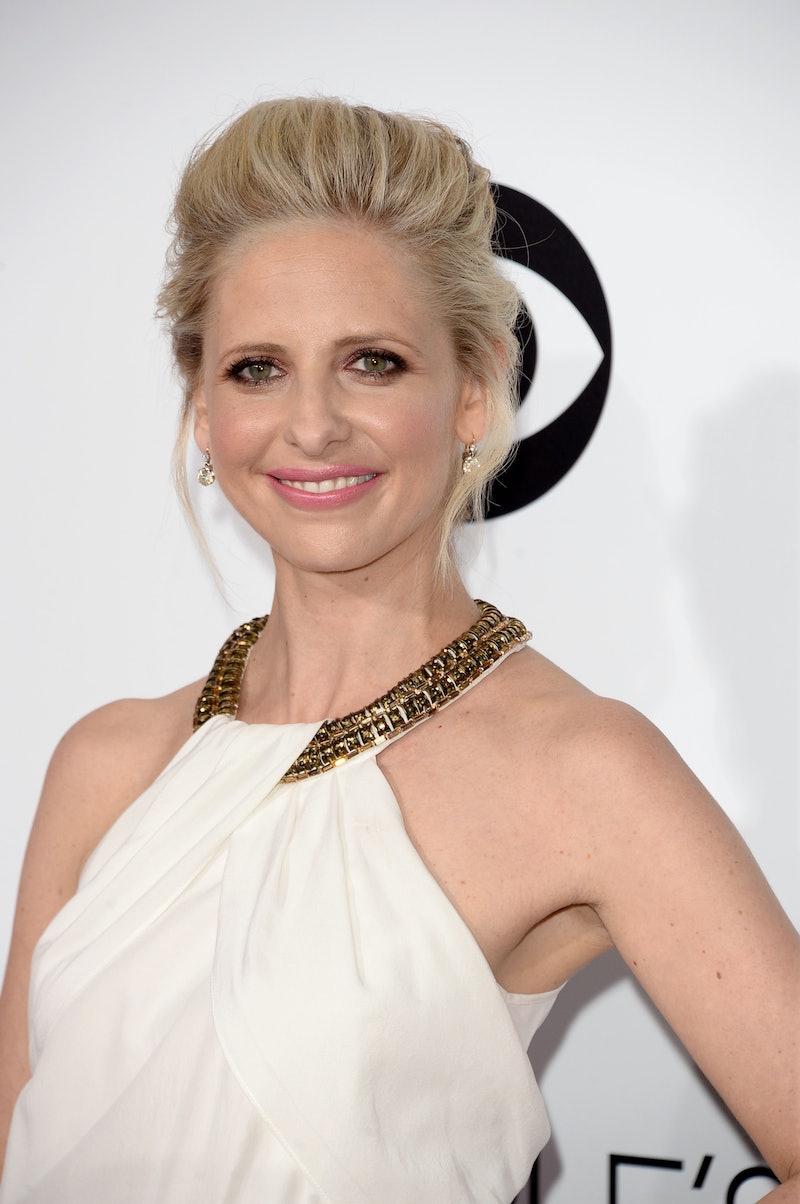 She hasn't been on Twitter long, but even the most casual readers of her feed probably notice a certain pattern: Sarah Michelle Gellar loves to tweet about Buffy . Whether it's posting photos of cast reunions, tagging the show's former crew members in "Follow Fridays," or just doing a shout-out to "all the BTVS fans out there!", Gellar has apparently chosen to make her Twitter something of a shrine to her former show. Yet while all of the actress' Buffy love is sweet, it's also pretty surprising; for years, Gellar, now starring on CBS' The Crazy Ones , has made every effort to distance herself from her best-known role, focusing on other projects and letting the show's creator, Joss Whedon, handle most of the Buffy nostalgia. Now, though, that's all apparently changed.

While we're all in favor of Gellar reviving the love for one of the best shows of all time, it's a little odd that she's changed her tune so suddenly. She spent years disassociating herself from the series, so why, now, is she embracing it? Our four best guesses:

1. She's Trying to Boost The Crazy Ones Ratings

Although The Crazy Ones is no Sean Saves the World, its ratings could certainly use a push. The series hasn't yet been renewed for a second season, and while the prediction is that it will, there's no guarantee — and that's where Gellar's Buffy love could come in. By reviving interest in her former series, and thus herself as an actress, Gellar could convince plenty of Buffy fans to check out her newest series. Sure, a show about a teenage vampire hunter and a show about father-daughter advertising execs aren't exactly fit for the same demographic, but with Gellar's help, fans of the former might just decide to give Crazy Ones a shot.

Gellar has only had a Twitter for four months, but in that time, she's racked up over 175,000 followers. With a fanbase that size, everything she says is bound to get an immediate, supportive reaction — and when she tweets about something as loved as Buffy, the response is bigger and better. Before Twitter, Gellar's only encounters with fans were on the street or red carpet premieres; now, each tweet she writes automatically gets the attention of thousands, most of whom respond with something along the lines of "I LOVE YOU/BUFFY SO MUCH!" With support like that, Gellar can't be blamed for tweeting about Buffy as much as she possibly can.

3. She's Realized Buffy was the Highlight of Her Career

Perhaps Gellar, after years of apparent denial, has finally come around to realizing that her career will never get any better than Buffy. Scooby-Doo, The Grudge, even the acclaimed Crazy Ones — nothing Gellar does for the rest of her career will overshadow the role that made her a star. If The Crazy Ones fails, like Ringer did just two years ago, it'll hurt or even end Gellar's chanceso f being a two-time TV star. Embracing Buffy might not save her show, but it will at least remind the actress that even if Crazy Ones goes under, she once starred in a beloved, seven-season show.

In all likelihood, Gellar has a Netflix account. Somewhere among her searches, she might've discovered that Buffy is available to watch on Instant Streaming. Perhaps, like all of us have at one point or another, she took a few weeks and re-watched the entire series. If she did, her constant Buffy-related tweets are now entirely understandable. Fans know that it's impossible watch the series, whether it's your first time or your tenth, without needing to talk about it. Maybe Gellar really is just like us, and felt the need to express her love for the show now that she's revisited its magic. Could you blame her?

More like this
Viola Davis Opened Up About How Hard It Is To Portray Michelle Obama
By Grace Wehniainen
Jennifer Aniston Is Still Wearing That 'Friends' Dress She Stole From Monica's Closet
By Jake Viswanath
Emma Thompson, Lashana Lynch, & Stephen Graham Lead Netflix’s 'Matilda'
By Sophie McEvoy
Why You Loved 'One Tree Hill' So Much — And Still Do
By Sabienna Bowman and Radhika Menon
Get Even More From Bustle — Sign Up For The Newsletter