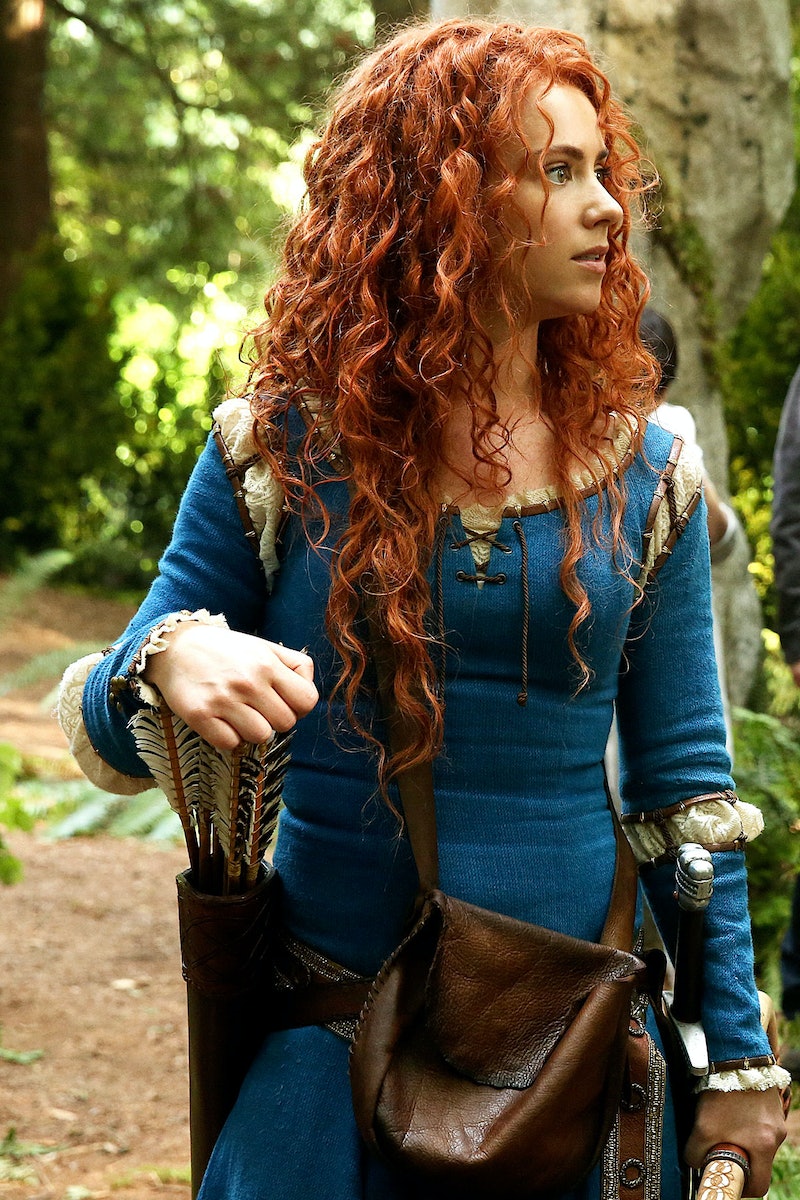 Back in July, it was announced that fiery Brave heroine Merida would be joining Once Upon A Time Season 5 — news that came as music to the ears of anyone who was a fan of the Pixar film and ready to mix things up a bit in Storybrooke and beyond. "Beyond" is the keyword here, since Merida will be introduced as our major characters head to Camelot, in the Enchanted Forest, to search for Merlin in hopes that he can help free Emma from the crushing evil of being the Dark One. We don't know too much about Merida's involvement in Once just yet, save for the possibility of a BFF-ship of epic proportions with Belle, but all of that's about to change as executive producers Adam Horowitz and Eddy Kitsis have teased us with a bit more information about Merida's arrival.

Perhaps the biggest detail we've been given thus far is that the Once version of Merida will take place after the events of Brave. "We’re going to give you a little taste of where she’s been since then, what’s happened to her since the end of that movie, and then we’re going to see that that somehow crosses with our people and with our Once Upon a Time mythology," Horowitz explained. "This is the first Pixar character on the show. It’s a character Eddy and I have loved since the movie came out. We’re very excited to include her in the show."

If that's not exciting enough for you, here's some more news: Merida will actually come face-to-face with Emma in Camelot well before she meets Regina, Henry, Snow, Charming, Belle, Hook, and whoever else tags along for Operation Emma. "It’s certainly a part of Emma’s journey as the Dark Swan and dealing with her darkness. All that is tied with how we explore the world of Camelot this year. At the end of last year, Merlin was revealed to be very important to what Emma needs," Horowitz said. "Hopefully you’ll see that it all ties together in a fun way. You’ll get that pretty much from the start. In the season premiere, there’s a lot that happens, including Merida and giving you a taste of what we plan to do with Camelot." I don't know about you, but I'm excited!

Given that Merida was already a well-established character in a recent Disney fame, something tells me her time on Once will be short-lived, much like Frozen's Elsa and Anna in Season 4. And while I might change my tune about this later on if I come to really love Merida on the show, I think I'm okay with that. Sometimes we need transitional characters to push the main plot further along. It helps if those characters are a lot of fun while we're there, but something tells me we won't have to worry about that with Merida.

More like this
'Bridgerton' Star Nicola Coughlan Confirms Season 3 Will Focus On Colin & Penelope
By Grace Wehniainen and Alyssa Lapid
Everything To Know About The Possibility Of 'The Essex Serpent' Season 2
By Rachel Mantock
ITV’s 'Grace' Will Likely Return for A Third Season — & Many More After That
By El Hunt
Will Viewers Revisit Welcome To Eden For Season 2? What To Know
By Kadin Burnett
Get Even More From Bustle — Sign Up For The Newsletter