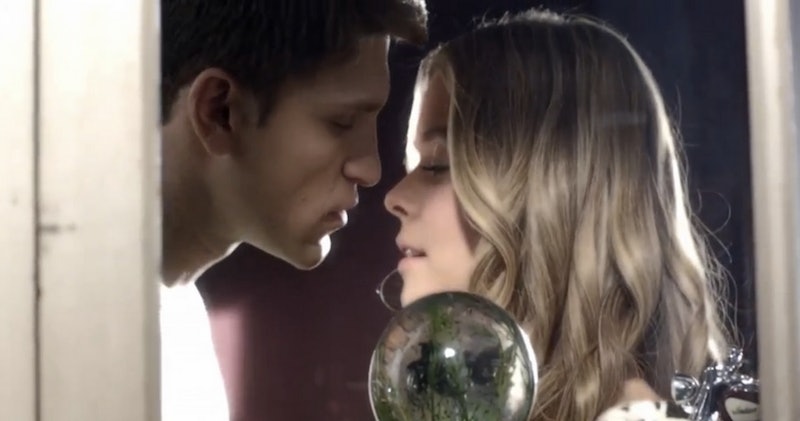 Perhaps the only thing crazier than the roller coaster of emotions that is watching Pretty Little Liars is how fans feel after the season is over — or when we get to the midseason break. Pretty Little Liars finally revealed who Big A is, and to say that fans were shocked would be an understatement. Ali's older friend CeCe is Big A on PLL, and that's not all — she's also Jason and Ali's big sister. While the reveal made perfect sense to some people, not everyone was convinced that CeCe was really A — after all, there were plenty of plot holes and inconstancies on Pretty Little Liars that would suggest otherwise. The biggest of which involves a flashback of Ali and Toby that seemingly messed up the timeline of CeCe as A and it's seriously wigging fans out.

In the Season 6A finale "Game Over, Charles," CeCe not only revealed that she was Big A, but revealed exactly how she became Big A. CeCe befriended Bethany, the girl who would end up in the backyard grave and cause everyone to assume that Ali was dead, back when she was a patient at Radley. In CeCe's flashback, she and Bethany are on the roof when Marion, Toby's mother and another Radley patient, comes up. CeCe watches as Bethany pushes Marion off the roof, which is pretty much what fans suspected happened all along. What's weird is that CeCe and Bethany are young teenagers in the scene.

While we don't know exactly how young CeCe and Bethany are in this scene, we can infer that they are maybe 13 or 14 at the oldest. We also know that CeCe is roughly four years older than Ali, as she is one year older than Jason. The problem with the rooftop scene, then, is the fact that the math simply doesn't add up to a later flashback involving Ali and Toby. In the Season 4 episode "A Is For Alive," we see Ali and Toby hanging out in Toby's room before Marion gets sent away to Radley, and they certainly look older than Bethany or CeCe do in the scene that seemingly happened years earlier. Here's the flashback:

Toby and Ali are played by Keegan Allen and Sasha Pieterse, which seems to suggest that their at least relatively close to the age they play in modern day. That's why fans were so worked up about this flashback: it seems to suggest a glaring error on the part of the writers. But before you start writing angry letters to I. Marlene King, she has a pretty good response for why this flashback played out the way it did:

She also dropped a bit of a truth bomb about the show, just in case you forgot that sometimes actors don't play their own age:

(Also, let's not forget that actress Troian Bellisario who plays 18-year-old Spencer is 29.)

Should both CeCe and Toby's flashbacks been consistent in terms of how they present memories? While it might have made things a lot less confusing, I can definitely accept King's explanation for why we saw Toby's memory played out in this way. It might be a storytelling inconsistency, but in terms of how it relates to the overall picture, this isn't a plot hole.