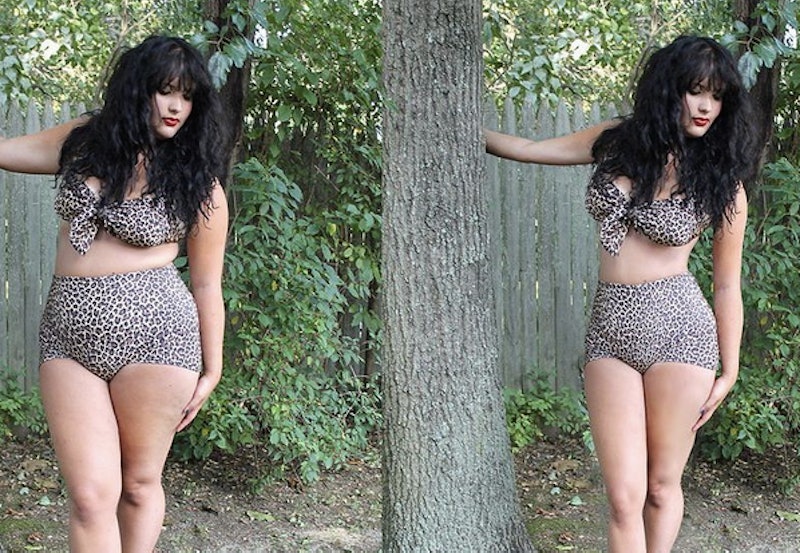 The Project Harpoon collective disturbed many last week with its #thinnerbeauty project, for which administrators edited photos of plus size women and a few men (without their consent) to make them look thinner. Thankfully, the Project Harpoon Facebook page has now been deleted.

ICYMI, its members believe themselves to be inspiring others to lead a "healthy lifestyle" (mistakenly connecting fat people with unhealthy lifestyles in the process), and self-describe as "body positive" individuals (arguably, they are the exact opposite). The page caught the attention of the press pretty quickly, after Hayat Rachi — owner of feminist lingerie brand Neon Moon — outed the project via a blog post. She was also the first to get an image removed from its Facebook page.

Luckily for us, the Reddit and 4chan-led project was taken down fairly easily, once members of the (actual) body positive community and many independent Facebook users commented on, fought against, and reported the site. Unluckily for us, the #thinnerbeauty hashtag has left its mark, and the message is still being celebrated on its own Facebook page. The Project Harpoon Tumblr is also alive and kicking, sharing photoshopped images on a regular schedule. When searching for #thinnerbeauty, it becomes clear that many different account exist posting the same kinds of photos with the same kinds of messages — mainly that the only way to be beautiful is to be thin.

When asked about their feelings about the Project Harpoon and Operation Harpoon pages being taken down on Facebook, a Thinner Beauty admin tells Bustle via Instagram:

While the main source of the content has been erased, Project Harpoon was just the tip of the iceberg of hatred that exists on the Internet. This is just one particularly nasty page that managed to make headlines. We might be patting ourselves on the back for getting it removed, but the hatred is still out there and the admins are continuing to fight for #ThinnerBeauty's survival on social media. Even as I shared news about the site on Twitter (before its deletion), I found myself getting harassed by strangers truly committed to the #thinnerbeauty cause.

We can and should happily celebrate the people who came together to get Project Harpoon taken down, and who are actively commenting on these body shaming Instagram and Facebook accounts to spread the message of self love to the world. These humans have done the world a justice and I'm thankful. But we cannot allow this small victory to blind us to the fat hatred that continues to exist on the Internet and in real life.

Thin privilege isn't a myth. Fat shaming isn't a myth. So it's going to take a lot more work to ensure pages like Project Harpoon stop spreading their vitriol.

More like this
Most Comfortable Underwear For Big Butts
By Audrey Williams
Myra Magdalen Is TikTok’s Queen Of Chaotic Maximalist Fashion
By Sophia Moore
42 Black Owned Fashion & Beauty Brands To Support Today & Always
By Mekita Rivas, Shea Simmons, Kui Mwai and Dominique Norman
Everything You Need To Know About The "Jellyfish Haircut" Trend
By Audrey Noble
Get Even More From Bustle — Sign Up For The Newsletter