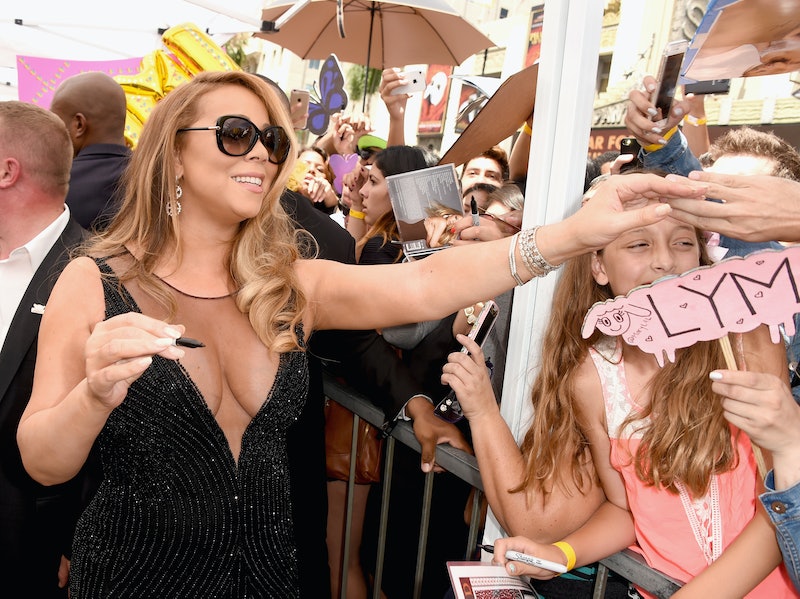 Back in 2013, the universe gave us the greatest gift in existence: Mariah Carey joined the American Idol judges panel for the singing competition's 12th season, and it was glorious. Sure, she spent much of the time feuding with Nicki Minaj and left after just one season, later calling it the "worst experience of [her] life," but it was wonderful while it lasted. Unfortunately, not for Carey — apparently, the Idol experience left her with a bad taste in her mouth, and now Carey has vowed to never do reality TV again. Her reasoning? She doesn't believe in creating celebrities out of people who haven't earned it.

According to the Financial Express, Carey admitted that she finds the whole reality TV thing to be a little tasteless, and insisted that she couldn't handle the idea of being constantly "on" in front of cameras. "Today, you can be famous just from being on a reality… Well, doing… You don’t really have to do much, but you kinda gotta do a lot, " she explained. "And then your whole life is just about being a celebrity and that’s what some people aspire to, because it’s easy and because then everybody knows them and all they see is the bright side of fame. I couldn’t handle being on a reality show, I couldn’t handle having people with cameras on me all the time. It’s already like that, it’s too much."

Whether or not you agree with her, you have to admit: Mariah vowing off reality TV is kind of the saddest news ever, because she's an absolute dream in terms of entertainment value and would be perfect for it.

Mariah is not here for any of your nonsense, and she'll let you know if you step out of line. Reality TV needs as much sass as it can possibly get, and Mariah is the perfect candidate for it. Imagine the amazing eyerolls and blatant shade. Ugh, delicious.

If you're a fan of the Real Housewives franchise or any of the Kardashians' shows, you'll know that reality TV is all about glamour. I ask you, who is more glamorous than Mariah Carey? She'd do her confessionals in $5 million worth of diamonds and satin gloves, and every second of it would be amazing.

She Speaks Her Mind

Yeah, she's got 'tude, but she also knows how to put things right in the world by telling it how it is. Can't you just see Mariah getting her girlfriends over and basically telling them how to get their lives together? Mariah won't just sit and let life pass her by, she'll jump right in. Having a camera around to document that is basically a dream come true.

She's Got Friends In High Places

One of the best elements of reality shows are the celeb cameos. Mariah probably knows basically everyone there is to know in the business, and I'm sure they'd love to pop by her mansion and just hang for a while while the cameras were rolling.

She's A Magnet For Drama

I'm not saying Mariah is dramatic (though, come on, most divas are), but she's got a lot going on in her life at any given moment, meaning there'll likely be tons of drama following her around. From disagreements with (soon-to-be) ex-husband Nick Cannon, to fights with her record company over gigs she doesn't want to do, every episode would have an over-the-top plot that would make your life.

Hopefully, her word isn't final, and the world can be granted with a Mariah Carey TV show before long.

More like this
Everything We Know About Chèrie & Jessey’s Abrupt Exit From Bling Empire
By Alyssa Lapid
Kourtney & Travis Crashed His Daughter’s TikTok Live In Their 2nd Wedding Outfits
By Grace Wehniainen
There's Plenty Of Drama Brewing To Warrant A 'Summer House' Season 7
By Brad Witter
When Was 'Bling Empire' Season 2 Filmed?
By Alyssa Lapid
Get Even More From Bustle — Sign Up For The Newsletter