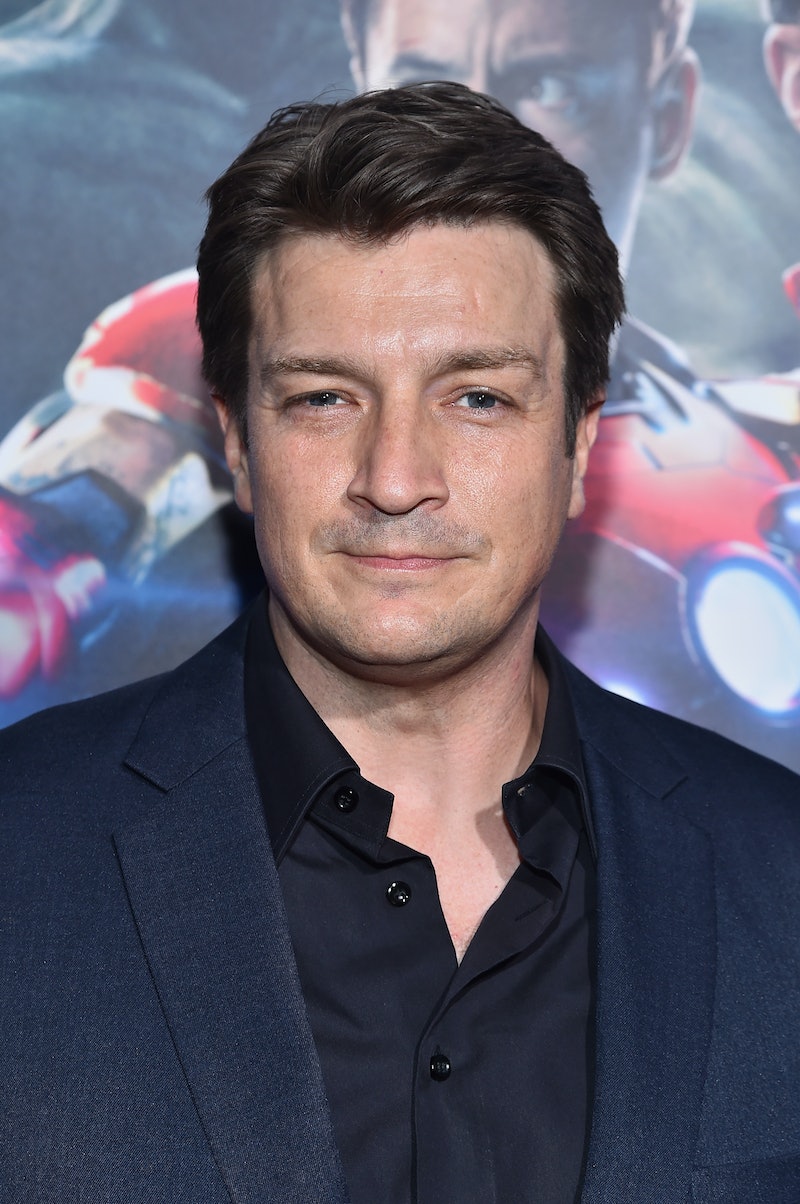 If you're a fan of sci-fi, the supernatural, or comic books, you're likely also a fan of Nathan Fillion. The diversely talented actor has been a part of numerous cult favorite films and TV shows, and worked his way into the hearts of fans of those genres over the years with his dedication to his work. I personally fell in love with him back in the Firefly days, and at this point, there's not much I wouldn't watch him in because he's just that good. That's why I was excited to hear that Fillion would love to play Booster Gold, a futuristic DC Comics character that he'd be absolutely perfect for, for real.

Fillion is no stranger to the comic book world, having previously voiced Green Lantern in animated Justice League movies like Throne of Atlantis and appearing in a short but totally memorable role in Guardians of the Galaxy . So why Booster Gold, and what does Fillion think he could bring to the role? "I think I could take a pretty good crack at Booster Gold," Fillion told fans at the 2015 Wizard World Comic Con Chicago, according to Entertainment Weekly. "That’s kind of my niche — show-offy, vain. I think I could handle that — not too bright.”

While Fillion was obviously being tongue-in-cheek, it's clear that he'd absolutely kill the Booster Gold role if it was ever brought to the big screen. After all, the character is a futuristic star football player whose career is ruined after he's caught betting on his own games. Desperate to get his life back, he gets hold of a power suit that lets him travel back in time, where he uses his knowledge of his present — or the future, to everyone else — to become a celebrity. Eventually he does become an actual superhero who defends the timeline, but that mix of humor and badass-ness would be perfect for Fillion, don't you think?

If you're not already convinced, here are a few other reasons Fillion should get the Booster Gold role should it ever come to life.

Not all superheroes need to be super hot, but Booster Gold is one that is, and Fillion is up to the role. He's got that rugged, mature hotness rather than boyish cuteness, which is just right, don't you think?

He's Got The Right Mix Of Humor & Seriousness

Given that Booster Gold is a bit of a joke sometimes, Fillion would no doubt bring the perfect mix of humor and earnestness to the role that make the character relatable and likable while still showing his darker, more complex sides. That's a gift!

He's Got Experience In The Comic Book World

Again, this wouldn't be Fillion's first time at the comic book rodeo. He knows the comic universe and has an understanding not only of the intense culture that surrounds them, but how dedicated the fans are and how much they'll be expecting of him if he were to take on such an iconic role.

He'd Be An Immediate Fan Favorite

I've literally never met a single human being who's said to me, "Eh, I don't really like Nathan Fillion." He's a great actor with a wide breadth of experience on TV and in film, and he's earned his place in Hollywood. Casting Fillion as Booster Gold would be the best news ever, and fans would no doubt immediately get behind it.

He Really, Really Wants The Role

I know that wanting something doesn't make you entitled to it, but considering Fillion's enthusiasm for the role, you know he'd give it 150 percent and be completely dedicated — even moreso than he usually is to every role he does — to the project. Come on, let's get this thing going, shall we?