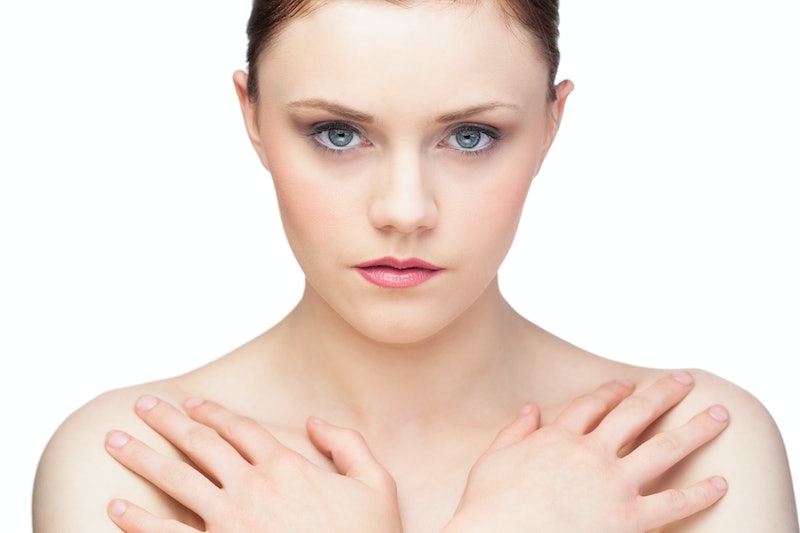 A recent study is being touted as evidence that "yes, men really do ogle women's bodies." But the full version of this news story is quite a bit more interesting than the 'men are from Mars, women are from Venus' version that's getting popular play. The study, from the University of Nebraska-Lincoln, used eye-tracking technology to measure where the male and female gaze fell when looking at photographs of women. Participants included 29 women and 36 men. Each was presented with the same 10 photos, featuring women of different digitally-manipulated body shapes.

The results? When asked to focus on the photo women's appearances, both sexes tended to focus more on women's chests and waists and less on their faces. Larger breasts, narrower waists and bigger hips provoked longer looks. This shows how objectification of women in media and society can lead ordinary women to self-objectify and to focus on those parts in other women, too, said lead author Sara Gervais.

The study was published yesterday in the journal Sex Roles. The majority of subsequent reports on it have overwhelmingly emphasized the male role in this research. "Men do ogle women's bodies, study confirms," trumpeted the New York Daily News . Here are a few more headlines, from Fox News, Business Standard and CBS, respectively:

A little misleading, No? Of course, the title of the research paper itself starts with "My Eyes Are Up Here," so clearly nobody's really in the mood to be adults about this.

The study did find male participants more likely to linger on breasts and waists when asked to think about the women's personalities, as well as more likely to rate the personalities of those with high waist-to-hip ratios positively. But what kind of a question is that? Asking someone to intuit someone's personality solely by looking at them is absurd on premise, so I don't think we need to make too much of this latter finding. Unfair as it might be, plenty of past research has shown that, in general, more conventionally attractive men and women are viewed as being healthier and having better character traits all around. Gervais sums up this Catch-22 for beautiful people nicely: "People are more positive towards a more attractive woman than a less attractive one. However, attractiveness may also be a liability, because while evaluating them positively, 'gazers' still focus less on individuating and personalizing features, such as faces, and more on the bodies of attractive women."

More like this
Wimbledon Alters All-White Kit Rule Amid Candid Period Discussions
By Catharina Cheung and Rachel Mantock
Iran Has Issued A Death Sentence Over Mahsa Amini Protests
By Catharina Cheung, Darshita Goyal and Maxine Harrison
How To Deal With A Partner Who Body Shames You
By Lexi Inks
The Best Lat Exercises With Dumbbells, According To Trainers
By Carolyn Steber
Get Even More From Bustle — Sign Up For The Newsletter