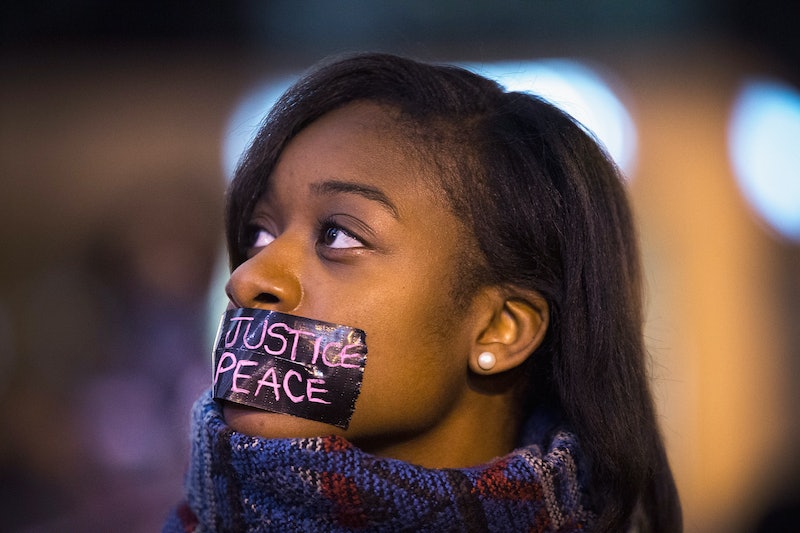 Since the controversial death of Trayvon Martin and the acquittal of his shooter, George Zimmerman, gave new emphasis to the issue of race relations in America in 2012, the Black Lives Matter movement has taken protests to a new level. Now, a new grassroots campaign is attempting to turn the movement into a concrete plan for change. In a single infographic, Campaign Zero sums up what Black Lives Matter activists have been working for these past three years — and lays out a plan for how they can achieve all of it.

Black Lives Matter has become the call to action heard 'round the country. Campaign Zero takes an organized, policy-driven approach to advocating for the change that Black Lives Matter activists want. The campaign's organizers have identified 10 specific categories where policy changes are needed. Taken together, these categories fit into three larger themes of change: limiting police interventions, improving community interactions, and ensuring accountability. Campaign Zero calls on policymakers at the local, state, and federal levels to prioritize and implement these changes, making the campaign a call to action for officials as well as activists. The group has launched an online petition to show policymakers that its constituents care about these 10 categories and want to see change in their communities.

Protests and demonstrations across the country have told legislators that black lives matter, but Campaign Zero has introduced a visual way for audiences to understand the movement. Beyond the infographic, Campaign Zero focuses on data, policy positions, and keeping citizens informed on the issues related to race relations and police violence.

To limit police interventions, Campaign Zero advocates for ending broken windows policing and ending for-profit policing. Campaign Zero identifies "broken window policing" as "policing minor crimes and offenses," like sleeping in parks or looking suspicious. The broken windows theory was introduced in 1982 by George Kelling and James Wilson, who argued that the policing of minor issues is important in order to prevent them from turning into larger issues. Campaign Zero pushes against that notion, arguing that broken windows policing results in over-policing, particularly when it comes to people with mental health problems, and the disproportionate targeting of black individuals. As a result, Campaign Zero urges policymakers to de-prioritize small offenses like spitting and trespassing, to stop unfair profiling, and to develop new approaches to mental health crises.

Policing-for-profit, Campaign Zero argues, causes police officers to search, ticket, and arrest people unnecessarily in order to meet quotas and raise funds for the department. In April, the Drug Policy Alliance published a report that showed the extent to which police officers in California disregard civil search and seizure laws in order to fulfill quotas and pick up resources for their jurisdictions. Many victims who were required to forfeit their belongings to police were immigrants and low-income individuals, who often cannot afford to go through the lengthy legal processes required to get their property back, according to the report.

Campaign Zero's next priority is to improve community interactions by limiting the use of force by police, changing police officer demographics to better reflect the communities they serve, improving training practices, and demilitarizing police departments. The common idea here is to create a mutual understanding and a mutual respect between communities and their police forces.

Campaign Zero wants to see policy changes that allow communities to provide feedback to their police departments, that test for bias during training exercises, and that prevent local departments from obtaining certain military-style weapons. In May, President Obama brought attention to the demilitarization effort by banning police departments from purchasing certain military-grade weapons from the federal government, including grenade launchers, bayonets, and armed aircraft, among others.

To hold police forces accountable, Campaign Zero calls for community oversight, independent investigations of police officers, body cameras, and fair police union contracts. The use of body cameras, in particular, has been a hot-button topic since the shooting of Michael Brown in Ferguson, Missouri, in 2014, as they've been proven to reduce the use of force by police and to reduce citizen complaints about police.

Holding police accountable is a priority for Americans across the board. According to a poll by USA Today and the Pew Research Center from 2014, only 30 percent of Americans say that police departments do a good or excellent job of holding officers accountable. Campaign Zero supports making officers' disciplinary histories accessible to the public, guaranteeing citizens' right to record police interactions, establishing effective community oversight practices, and establishing an independent Special Prosecutor's Office at the state level to investigate police officers and departments.