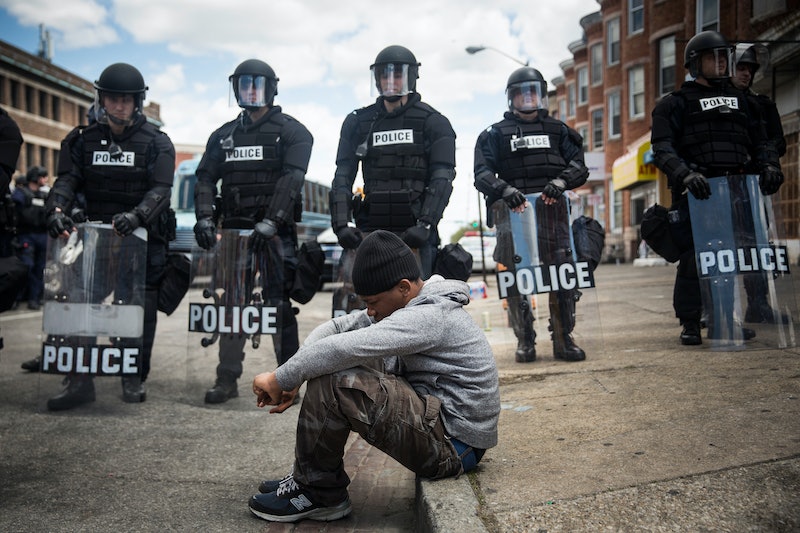 Following the Baltimore riots, President Obama will take further measures to curtail the alleged excessive use of force by police departments in American cities. According to The New York Times, administration officials revealed Monday that Obama will ban local police forces from receiving military equipment, which many U.S. law enforcement departments have requested through use of federal funds. The president is also expected to limit the availability of some types of military-style equipment.

The move comes four months after a federal interagency working group, led by the Department of Justice, probed the federal programs that approved and distributed certain military equipment to local police forces. Obama will ban local law enforcement agencies from receiving these potentially dangerous items identified by the interagency task force, including grenade launchers, tracked armored vehicles, bayonets, armed aircraft, and guns that have a caliber of .50 or higher, the White House said Monday.

The president will also limit the distribution of military-style equipment such as drones, riot gear and specialized firearms and ammunition. While police departments will still be able to receive these items, they will have to follow stricter guidelines, including new training regimens and policing protocols. Police departments will also need approval by civilian-led groups, such as the local city council, in order to receive the military equipment.

In addition to the interagency task force, Obama established the Task Force on 21st Century Policing in December 2014 as a response to the riots the broke out in Ferguson, Missouri, following the death of 18-year-old Michael Brown and the ensuing pardoning of the police officer who shot him, Darren Wilson. Those riots rocked the small Missouri city and invited questions about the seemingly militarization of American police departments, many of which received military-style weapons and equipment, such as armored tanks, in the wake of the Sept. 11 terrorist attacks.

"Over several months, the Task Force held public hearings across the country; took testimony from over 100 witnesses; reviewed hundreds of written submissions and thoughtfully came to consensus on 59 concrete recommendations," the White House said Monday in a statement, shortly after the policing task force released its final report. The report concluded that some police departments have been losing trust in their communities through the "inappropriate use of equipment and tactics during mass demonstrations."

Given its findings, the task force recommended that local law enforcement agencies curb its use of military-style equipment and patrol:

Law enforcement agencies should create policies and procedures for policing mass demonstrations that employ a continuum of managed tactical resources that are designed to minimize the appearance of a military operation and avoid using provocative tactics and equipment that undermine civilian trust.

The policing task force also recommended that the federal government should create "a mechanism for investigating complaints and issuing sanctions regarding the inappropriate use of equipment and tactics" during mass protests.

Ronald L. Davis, the director of the Office of Community Oriented Policing Services at the Department of Justice, told reporters in a conference call on Monday: "We are, without a doubt, sitting at a defining moment in American policing. We have a unique opportunity to redefine policing in our democracy."

Obama is expected to make his announcement during a visit to Camden, New Jersey, on Monday, where he will speak at the city's police headquarters and also visit residents at a community center. Not long ago, Camden replaced its police force with a county-run law enforcement agency, with the purpose of fostering an improved relationship with the community. Obama will likely point to Camden as policing done right.

"Camden is an example of a lot of good things happening, a lot of things moving in the right direction," White House Domestic Policy Council Director Cecilia Muñoz told reporters on Sunday.