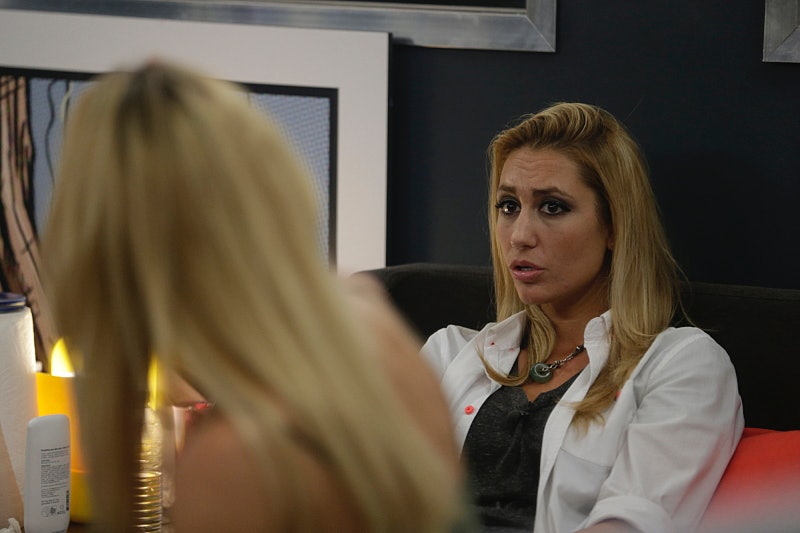 Things haven't been the same between Vanessa and Austin since she almost backdoored him during her reign as Head of Household a few weeks ago on Big Brother 17 . I mean, she almost got the guy evicted, so you can't blame him too much for any lingering hard feelings. However, what seemed to bother Austin even more was the fact that Vanessa never owned up to her master plan to backdoor Austin, which included enlisting James to throw the Battle of the Block competition. Now with Austin as Head of Household this week, Vanessa might have felt her back up against the wall — which it is — so she finally came clean about asking James to throw the BoB competition a few weeks ago during Sunday night's episode of Big Brother.

I have to tell you, I was so shocked when that happened, I almost felt as if I had hit my head as hard as Meg did during the "OTEV" competition from Wednesday night's episode. Vanessa had kept on denying that she had any knowledge of such scheming for so long, and she's such a crafty player that I thought that was one secret she was going to keep to herself until death.

But no. After several attempts at getting to the truth, Austin asked her once again point blank if she knew about James throwing the BoB competition, and she finally said she did. This of course came with such trademarks of Vanessa's gameplay on BB17 as tears and attempting to place the blame on others, such as saying that she only did what she did because she felt betrayed by Austin when he lied about the whole Jason kerfuffle. She couldn't totally leave the manipulation behind, now could she?

Austin seemed satisfied that Vanessa had finally owned up to her plan, and it actually seemed to get Vanessa back on good terms with him, which is something she desperately needed. Earlier in the episode, the Scamper Squad of Austin, Vanessa, Liz, Julia, and Steve got their scampering on. During their meeting, Vanessa was really playing hard by trying to convince the group to follow her plan for who should go up and be evicted this week. Her alliance members had been feeling that Vanessa had been overplaying her cards (poker pun definitely intended) by getting caught in her lies and showing her manipulation more explicitly.

After all of that went down, Austin seemed convinced that Vanessa was the one who should go this week. However, her admission seemed to make him unsure of that, which is the opposite of what you think would happen when someone basically admits that they've been lying to you this whole time. I guess it made Austin feel like he could trust Vanessa once again.

But still, I really didn't think Vanessa's revelation would be enough to maintain her relationship with Austin and stay off the block this week. However, it did just that. After much back-and-forth, Austin nominated Steve and John this week.

But this is Big Brother. You know, expect the unexpected and all that jazz? In the Diary Room, Austin didn't completely rule out the possibility of backdooring Vanessa this week. So he'll let her think they're on good terms. For now.