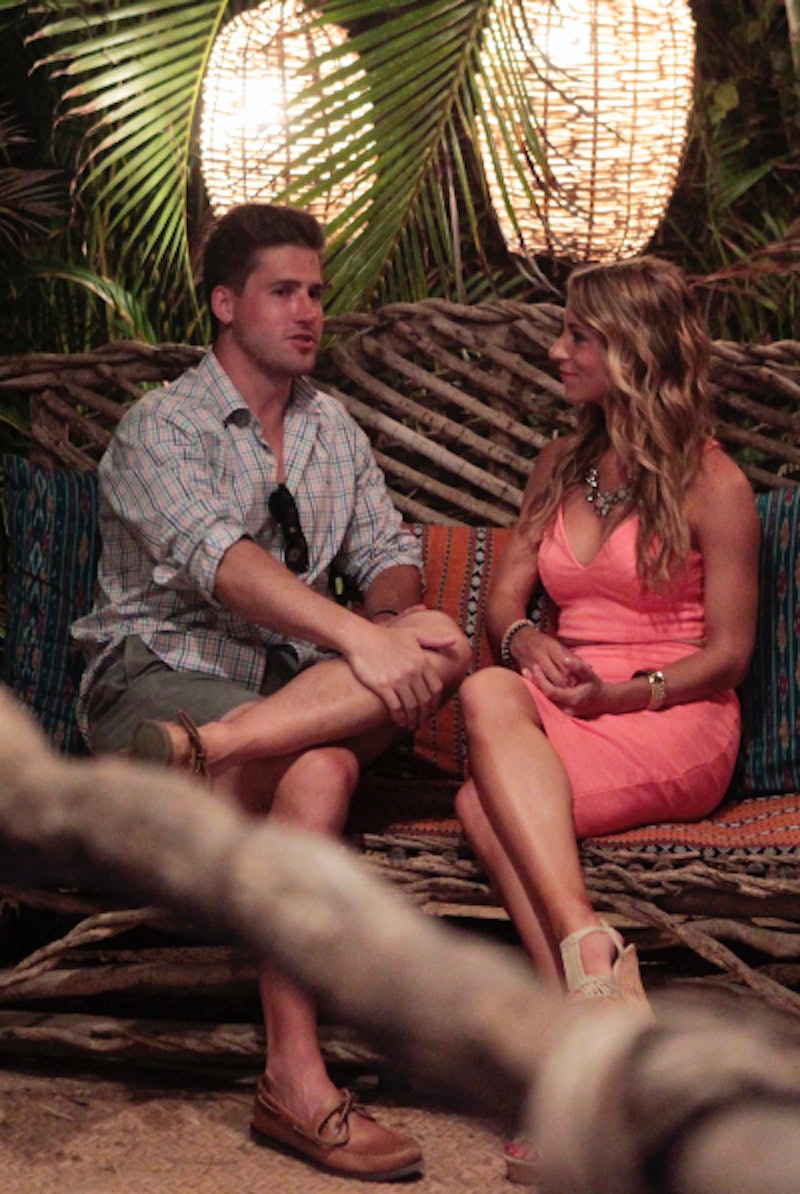 On Sunday's dramatic episode, contestant JJ decided to leave Bachelor in Paradise for a woman back home, and you really can't get mad at him. Hear me out. JJ's take on his departure from the series was to try to help Ashley S. find love. And I kind of respect that? Yeah, it's weird — JJ the "hero" — but it kind of works. Although now you're probably wondering who who JJ's girlfriend back home is. You're not alone, don't worry. Unfortunately, JJ never actually got the girl back. After the episode aired, he confirmed on Twitter that he is still single. But props to him for trying!

I am floored at all of the love tonight. Thank you! And in response to whether I got the girl ... Unfortunately I did not get the girl back. She is an amazing woman ... definitely was a bummer! This show makes some things quite challenging. Soooo ... I am single, divorced, live with my parents, and play beer league hockey and PS4 in my ample free time. Please form an orderly queue.

So while he may not have gotten his girl back, at least he gave Ashley S. the chance to stick around and find hers. And at least he gave it a shot with the girl from Denver. He won't have any regrets, at least.

During the oddly-placed rose ceremony on Sunday's episode, JJ was stuck with "deciding" between Juelia and Megan. Meanwhile, Dan was deciding between Amber and Ashley S., and Ashley didn't really stand a chance. So in a moment of pure shock, JJ decided to give his rose to Ashley. ASHLEY. Everyone — and I mean everyone, including Ashley — was shocked to hear JJ say her name. For a second, it seemed like Ashley wasn't going to even accept the rose. (Don't worry, she did in the end.)

So that left Dan to "save" Juelia. He didn't. He followed his own heart and chose to go with Amber, with whom he truly had a connection. But do not fret; Juelia was relieved when the producers brought Mikey T. back to the show. I guess that's good? I don't know. At this point, I want Juelia to maybe just accept that the seven men on the show aren't meant for her and move on, but she should live the life she wants. And if that life is with Mikey ... OK.

But back to our hero, JJ. Carly — forever our voice of reason — said it best when she summed up his departure.

Usually, everyone would be like, "Curse you, JJ. How dare you have someone back home." But at least he's not only giving Ashley S. a chance to find love (by handing out his rose), but he's also pursuing his own love. According to JJ, he dumped this girl to be on the show, but he just couldn't stick with it when he felt his (calcified) heart was somewhere else.

I never thought I'd say it, but JJ, you did good. And hopefully you find the girl for you soon!

More like this
What’s New On Netflix: A Victoria Justice Rom-Com & The Return Of David Letterman
By Arya Roshanian
What’s New On Netflix: The Return Of 'Bling Empire' & A Rebel Wilson Comedy
By Arya Roshanian
Kanye Walked Out Of Kim's 'SNL' Monologue Because Of These 2 Words
By Jake Viswanath
Penn Badgley & Leighton Meester Met On A Horror Movie Set Before 'Gossip Girl'
By Jake Viswanath
Get Even More From Bustle — Sign Up For The Newsletter