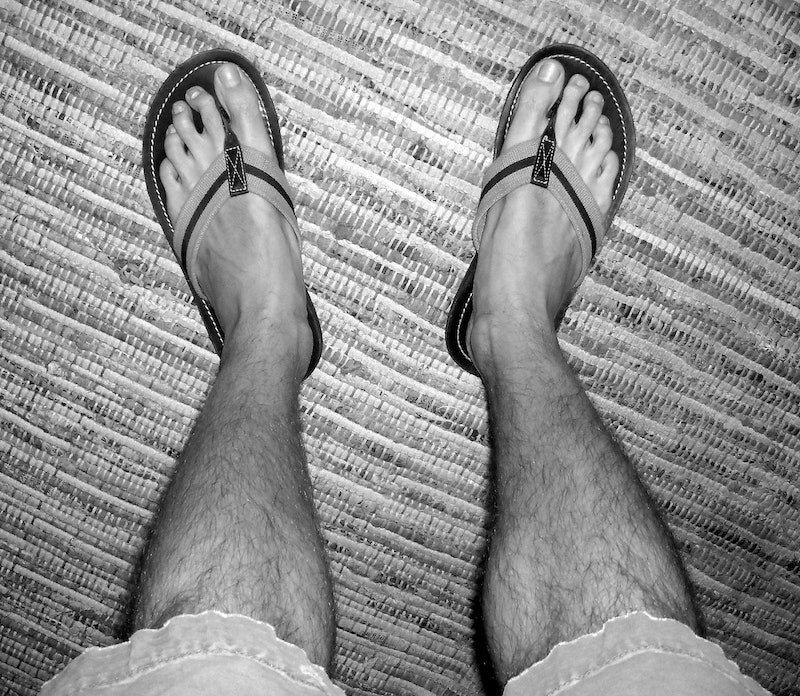 There are some old wives' tales about sex, partnership, and pleasure that are actually rather sweet, if bizarre. Sewing a swan's feather to a pillow, for instance, is meant to guarantee a partner's fidelity, presumably because swans mate for life. Other old wives' tales about sex, though, are just ridiculous — and you, rationalist modern critical thinker that you are, may believe more of them than you think you do. We've already put together a list of five sexy old wives' tales that need to be busted — but there are so many more that we've come back for a second helping.

Logic often goes out the door when it comes to bedroom facts anyway — and while you probably mostly associate folk wisdom with determining the gender of a baby through swinging a ring above the belly, or stepping over cracks so as not to cause a maternal figure spinal injury, misinformation has been handed down about naked fun times, too. Some old wives' tales actually have a basis in scientific truth, but others, frankly, need to be thrown out and never discussed again — or at the very least cast a very distinct side-eye.

Some of these may have passed you by entirely, while others will have been so unquestioned you may be shocked to find they're complete horse feathers from beginning to end. Either way, it's time to sweep all the old wives' tales comprehensively out of your bedroom. (But don't lean the broom on the bed, or evil spirits will curse it. Just kidding.)

This one has had a recent renaissance thanks to Japanese anime, where nosebleeds figure as a visual sign of overwhelming lust. It's called hanaji, and you can understand the false biology behind the idea: a buildup of "pressure" may cause biological overflow in the weirdest of places. If not premature ejaculation, why not blood?

Fortunately for everybody who ever got a nosebleed in freezing weather, this one is untrue. The website Kokatu conducted an investigation, and determined that while blood pressure does indeed rise when you're sexually aroused, a nosebleed is a pretty far-fetched outcome. It's not even used as a diagnostic tool for dangerously high blood pressure overall: according to the American Heart Association, only 17 percent of people with serious blood pressure problems (and we're talking medically critical, not bit-of-a-flush) had nosebleeds as a symptom. Myth busted.

3. You Can't Get Pregnant If You Have Sex In Water

I can only imagine this is one of the reasons why myths about cavorting with mermaids were so popular in many cultures: no babies. The problem? The result can definitely, definitely be babies.

The reasoning appears to be that water-based sex "flushes out" the vagina and "floods" sperm, preventing them from reaching and fertilizing an egg. But it's nonsense for the same reason that washing or douching after sex will do exactly zero to prevent pregnancy: sperm are very, very good at what they do. They can overcome huge obstacles to get themselves up into the cervix, uterus, and fallopian tubes — and they can survive, perfectly happy, for up to a week inside your hard-to-flush-out areas. A watery beginning will not do very much at all to stop this happening. Birth control fail.

4. Lettuce Can Make You Aroused

Lettuce has had a decidedly aphrodisiac reputation for thousands of years: it was seriously potent for the ancient Eygptians, and the queen of Greek goddesses, Hera, was reputed to have become pregnant with Hebe, goddess of youth, after eating a lettuce. The superstition about lettuce's phenomenal arousing powers continues today as folk wisdom.

The theory that men who are more sizeable overall, particularly in their hands and feet, will be more blessed in the intimate department is so widespread it almost seems unfair to question it. But do not go on dates with men simply because they flaunt their size-16 shoes, because science has proven that it's not a guarantee of 10 inches anywhere else.

A 2002 study by the University of London did the hard work for us, and after surveying a sample of 104 men and their relevant appendages, determined that there is actually no correlation at all. That's right: an oversized dude is no more likely to have a giant dick than 5'5" Brad in Accounts.

6. Men Think About Sex Every 7 Seconds

Unfortunately for stand-up comedians everywhere, this myth — which has obscure origins — seems to be debunked. Sort of.

Two studies, as reported by the BBC, asked groups of people to monitor their own thoughts, one lot by clicking a hand-held device every time they thought about food, sex or sleep, the other by answering random calls throughout the day with what they'd been thinking about at that exact moment. The results fell far below the seven-second mark — at least consciously. (We have many different kinds of thoughts, and the seven-second figure may have been referring to less conscious kinds, like drifting associations.) But the BBC also pointed out that these studies may have made people self-conscious about their sexy thoughts — so we may never know whether this myth is true or not.

This one comes from some very saucy old wives indeed, and it's frankly a little odd, in that the science doesn't fall one way or the other — for the very good reason that there's never been a definitive study about semen-taste. Rounding up volunteers for it would probably be slightly tricky.

Anecdotal evidence certainly suggests that diet plays a part in the smell and taste of semen, but Psychology Today points out that it's 96 percent water and two percent sperm, leaving only two percent of anything that could improve its taste. It does contain fructose, or fruit sugar, as a nutrient source for the sperm, which may explain why fructose-high sugary fruit is reputed to be a semen taste-boost. Chances are that this is a highly individual situation, and that biology, overall diet and other factors also play a big role in semen's taste, as does the tastebud arrangement of the person experiencing it. Don't bank on pineapple as a way to make your next blow job a pleasant experience, is all I'm saying.

More like this
Here’s How To Deal With Sexual Frustration If You Don’t Want Casual Sex
By Annakeara Stinson and Mackenzie Sylvester
Here’s How To Reignite The Spark In A Sexless Relationship
By Vanessa Marin
I'm 42 & I've Never Had Sex. Is It Too Late?
By Sophia Benoit
An Honest Review Of The TikTok-Famous WalkingPad
By Kaitlyn Wylde
Get Even More From Bustle — Sign Up For The Newsletter