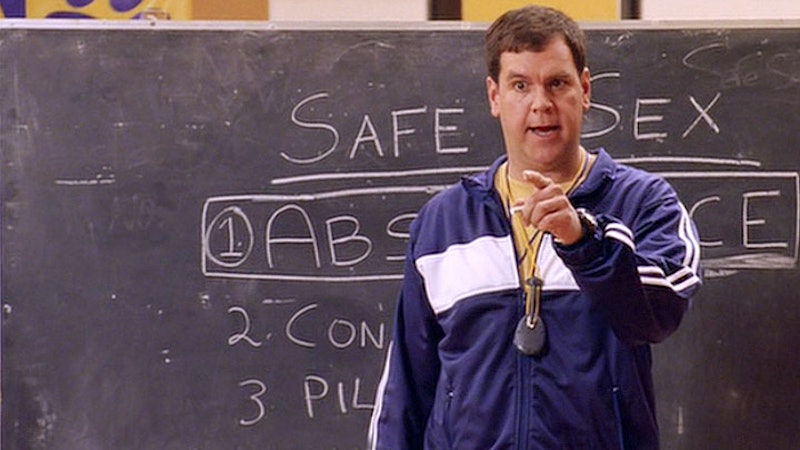 Back in the olden times, before we had important sexual teaching tools like Our Bodies, Ourselves or GIFs of James Deen, people pretty much just had to guess about how sex works. And, of course, we mostly guessed wrong. I mean, can you blame us? The actual facts of human conception sound like something someone came up with while trying to play Dark Side of the Moon backwards; how could anyone have guessed that?

But even though we are now decades deep into actually understanding the science of sex, the legacy of those long-ago bad guesses about how sex works still lingers, in the form of sexual myths. Sex myths — also known as "old wives' tales," "stuff everyone knows," or "facts I learned on Reddit" — aren't generally connected to the facts, but we hear so much of them growing up (especially when we're young and don't have access to the real facts about sex) that it's often hard to clear them completely out of our heads, and impossible to clear completely out of the culture. Think of them like urban legends, except they're about your vagina.

The five sexual old wives' tales below have their roots in past decades — or sometimes even centuries —but you've probably heard some variation on them recently from a clueless relative, ill-informed friend, or bar bathroom wall.

1."You Can Tell If A Woman Is A Virgin By Looking At Her Vagina"

The Tale: All virgins have visibly intact hymens — and thus, anyone charged with the task of inspecting a woman's vagina (doctor, suitor, very overzealous bikini waxer) can tell her sexual status.

The Truth: All sorts of non-sexual activities can tear your hymen, from riding a bike, to getting a gynecological exam, to competing in a rhythmic gymnastics tournament. And since hymens actually come in all different kinds of shapes, some of them have larger openings in the middle and can actually stretch, rather than tear, during intercourse. All of which is to say: the only way to tell if a woman is a virgin is by asking her. And seriously, why do you care so much, weirdo? Go get a better hobby, like fly fishing, or rhythmic gymnastics.

2. "All Women Bleed The First Time They Have Sex"

The Tale: Ready to have penis-in-vagina sex for the first time? Then you, young lady, better get some sheets that you won't mind throwing out later, because you are going to bleed all over them. And if you don't ... um, are you sure you're a virgin? Like, maybe you lost your virginity and then forgot about it or something? Like when you go to wash your coffee mug, but it turned out that you already washed it and then forgot?

And that's fine! There's nothing particularly healthy about bleeding when you lose your virginity, and nothing unhealthy about not bleeding. And don't take anyone's guff if they try to say you're lying about your sexual status! I don't even know this jerk, but I can already tell that you're too good for them.

3. "The Sex Of Your Baby Can Be Determined By The Position It Was Conceived In"

The Truth: People have been trying to game the whole "sex of your baby" system forever — in addition to sex position shenanigans, there are theories about what food you should eat or what temperature you body should be to conceive a boy or girl (remember that episode of How I Met Your Mother where Marshall and Lily kept heating and cooling their genitals to try to control the sex of their baby?). But, sadly for all you control freaks out there, none of these methods work — there is no way to predetermine the sex of your child before you conceive it, if you're doing it the old fashioned way (you can select for sex if you're being artificially inseminated).

Also, gender is a construct anyway! So you might as well be comfortable while you conceive.

4. "You Can Contract An STI From A Toilet Seat"

The Tale: You can pick up any STI that you could catch from intercourse by sitting down on a public toilet that someone with one of those STIs has also recently used.

The Truth: While in the old days, many people had a hard time telling the difference between an amorous encounter with a caring partner and dropping a deuce at the Sunoco station, we now know better: it is next to impossible to catch chlamydia, gonorrhea, HIV, or any other STI from a toilet seat.

In order to actually catch an STI from a toilet seat, you'd have to expose an open wound or your urethral opening to some infected bodily fluid, in the window of time when the fluid was still infectious. Your urethral opening, for the record, generally does not come into contact with a toilet seat; your butt cheeks do. Abigail Salyers, PhD, president of the American Society for Microbiology, claimed that she had never heard of anyone catching an STI from a toilet seat, and you know that she's paying more attention to this stuff than you are!

The Truth: This one's a half-truth! A 2005 study found that raw oysters contain some amino acids which, when isolated and injected into rats, were linked to the release of some sexual hormones. The study did not, however, say how many oysters you'd have to eat for them to actually raise your sex drive, nor whether humans should expect the same effects just from eating a few of these things on the half-shell at Red Lobster. So I'd still take this one with a grain of salt (and a splash of tabasco).