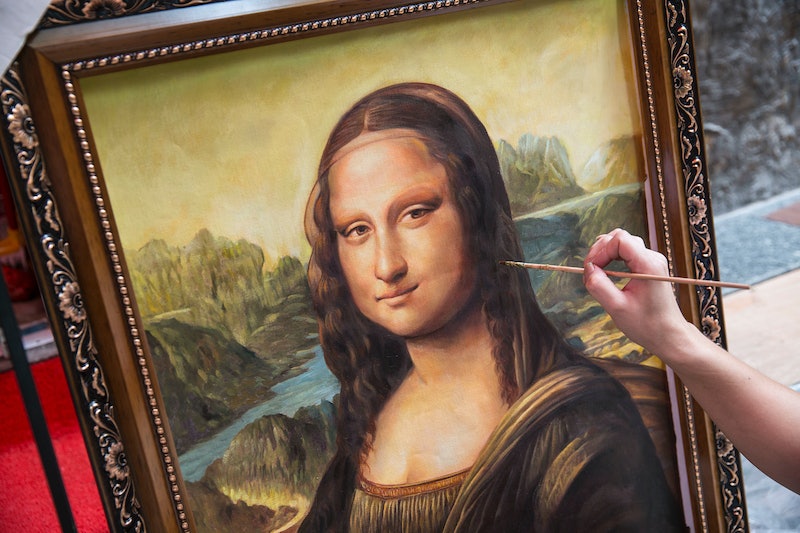 For centuries, the enigmatic smile that Mona Lisa appears to flash at beholders has mystified art critics. The famous Mona Lisa smile has spawned endless speculations about its painter Leonardo Da Vinci's technique and even inspired the name of a 2003 film. Now, science sheds some light on why Mona Lisa's smile appears to change when viewed from different angles: The painting technique "sfumato" exploits our tendency to perceive objects differently using direct and peripheral vision.

Researchers from Sheffield Hallam University examined a recently discovered earlier painting of Da Vinci's, La Bella Principessa, along with the Mona Lisa. The subjects of both portraits have what the study's authors call an "uncatchable smile," apparent when gazing at the face's eyes but disappearing when attention moves downward to the mouth. Sfumato, the blurring of borders between objects, leaves Mona Lisa's and Bella Principessa's facial features ambiguous, so people in the study who viewed the paintings from different angles and distances and with different levels of blur perceived the facial expressions differently. Specifically, the greater the distance and digitally added blur, the more the women in the paintings appeared to smile.

This is one example of how artists and designers have exploited the human visual system to make a piece of art come to life. Even when we don't think about it, art always takes our perceptual tendencies into account; for example, the technique of depicting further-away objects as smaller mimics the way scenes appear to shrink into the distance in real life. Though science is always behind the way we perceive art, here are a few images that particularly illuminate the way human sight works.

These two photos feature the same exact people. How is that possible? With its slanted ceiling, the Ames Room makes people appear shorter on one end and taller on the other. Possessing slanted walls as well, the Ames Room is trapezoidal, but since we are accustomed to rooms built in a square shape, we perceive people's heights as we would in a square room. According to one study, the best antidote to this illusion is marriage: Married people are less susceptible to the Ames Room's effect when they look at their spouses in the room. In particular, the stronger women's feelings toward their spouses, the less size distortion they perceived. Go figure.

Squares A and B in this drawing are the same color. I know, right?! It seems impossible. However, our brains perceive the color of an object based on surrounding colors, since we're aware that shadows are kind of a thing. So, we attribute square B's dark color to the shadow around it and square A's dark color to its intrinsic properties because the shadow falls outside it. In other words, rather than seeing B as a dark grey, we see it as a light grey with a shadow. Which reminds me...

Yes, that dress. Like the checkerboard, the way we see the famous ambiguously blue and black or white and gold dress is due to our perception of shadows. One minute, the dress looks white and gold because it looks the way those colors would look in the shadows; the next, it looks blue and black because that's how those colors would look in broad daylight. Different people may perceive the dress differently based on how accustomed they are to natural light, as well as their age and gender.

Escher's famous never-ending stairway — an example of Penrose stairs — is an impossible object, which means exactly what it sounds like. Since we live in a 3D world, our instinct is to perceive all images as 3D even when they can only exist on a flat canvas or piece of paper. So, when we see 2D images (like an endless staircase) that could not possibly correspond to anything real, we turn them into 3D objects that make sense to us — in this case, we perceive the Penrose staircase in chucks instead of as one continuous walkway.

Collectively, these images demonstrate that we see with not just our eyes but also our brains, so our preconceived notions about the world influence as basic an act as perceiving color or size. I'll let you ponder the implications of that.