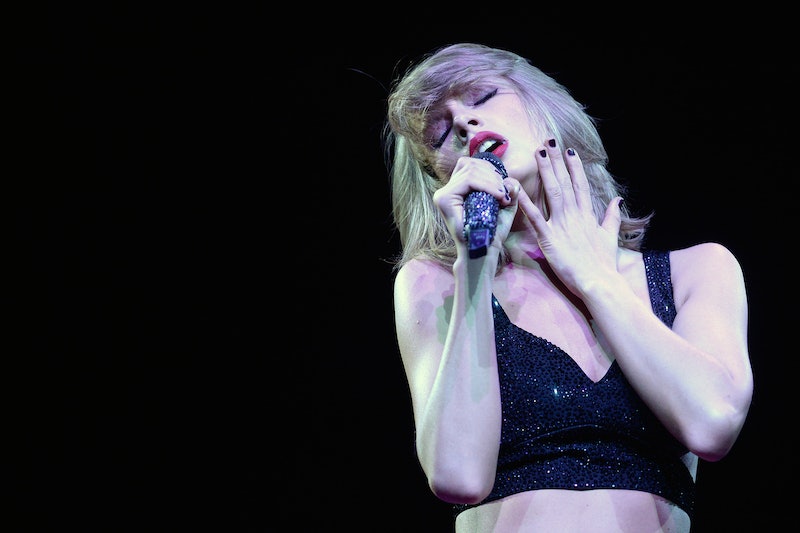 We've known for a while now that Taylor Swift's next single is "Wildest Dreams," but now we have our very first look at a sneak peek of the "Wildest Dreams" music video that the pop star has shared on her Instagram. Naturally, that means it's time to mine that sneak peek for information about what the full version will be like. It's a process that wasn't that necessary for me with other singles like "Bad Blood" or "Blank Space," because I'm super familiar with those songs, and already was when the videos were being promoted. However, somehow, in the midst of an album I listened to on repeat, "Wildest Dreams" is a song I skipped pretty much every time it came on. And it's not because it isn't a great song. It's just that I mostly listened to the album when I went for runs, and, when I'm in that mentality, I'm looking to get pumped up, not sultrily crooned at.

So, let's talk about what we're seeing in this preview so far, and what it means for the whole video. We only have a few seconds of footage from which to glean information, but it's not my first time at the rodeo. I have high hopes for the conclusions I'll be able to draw, don't you worry. Here's the teaser Swift posted to her Instagram, so you can take a look before we get down to the brass tacks of what to expect.

He's played by Scott Eastwood, the handsome, 29-year-old son of Clint Eastwood, whom you might've seen recently in The Longest Ride . One thing I've noticed is that Eastwood has a very similar look to Dominic Sherwood, who starred opposite Swift in "Blank Space," so my prediction is that she's staying close to type with an aloof, kind of cold dude that she's holding in her thrall.

Speaking of Nicholas Sparks movies, this looks a lot like one to me, with the tight embraces, face-touching, and rain-kissing. And a dream-like quality as well, which makes total sense with the song's title.

What I'm getting so far is, like, moody safari. Whatever that means.

We get a shot of Swift's eye at one point that's close enough to see her pupil dilate, so I'm predicting a fairly intimate video with close shots and artistic moments.

The shot of the aircraft in particular clued me in that this might not be set in modern times, and then, when I snagged a screenshot of the slate, I noticed that the year was written as 1950! So we doing a period piece! I see you, Taylor Swift!

It's unclear whether those rewinds were added just for the teaser, but there are multiple moments where time seems to reverse and run backward. Goes along with the "dream-like" quality I mentioned earlier.

"Wildest Dreams" isn't as story-heavy as some of Swift's other songs, so I'm thinking that this video will be a lot more about imagery rather than a specific character. I'm thinking long shots of these two on horseback and gazing into each others' eyes, with our brains left to fill in the rest.

And all that from just a few seconds of footage! Not bad, huh? The video will be premiering at the MTV Video Music Awards pre-show airing on Sunday, Aug. 30, so make sure to tune in and see how I did with my predictions.