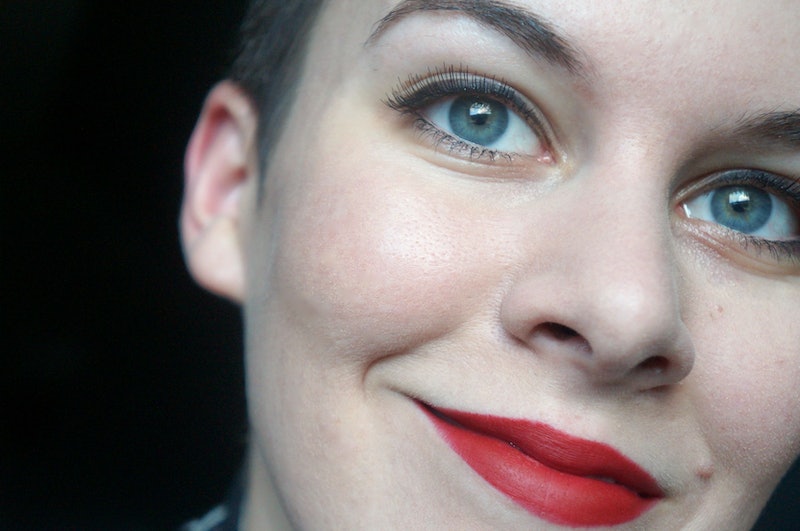 No matter how much experience one has with beauty, everyone has that one thing that they just cannot get the hang of. For some people it's creating the perfect cat eye with liquid eyeliner; for others, it's wearing red lipstick. For me (and many others) it's false lashes.

No matter how many times I try, no matter how many different brands of falsies I buy, I just can't seem to get the hang of it. It's incredibly frustrating for several reasons. For one thing, someone who writes about beauty as much as I do ought to be able to master even the trickier aspects of makeup. And besides, doesn't everyone deserve long, luscious lashes, if that's what they desire? Mine are naturally short and stick-straight. Although most of the time I am perfectly content to curl them with an effective eyelash curler and lengthen them with my favorite mascara, sometimes I want a little more drama. Often I'll binge-watch The Vampire Diaries and sigh over Nina Dobrev's eyelashes, or Zooey Deschanel's lashes on New Girl. I'm convinced that both wear falsies, because no human being has lashes that reach their eyebrows like that.

Finally, I decided it was time to really give it my best shot. With the idea that "practice makes perfect," I resolved to wear false lashes every day for a week. Hopefully at the end of the week, I would be at least marginally better at applying false lashes.

First I gathered up all of my supplies: false eyelashes, scissors, eyelash glue, and an extractor (more on that later).

For reference, this is what my natural eyelashes look like normally with no mascara:

I mostly used these lashes that are super cheap on eBay, although I'll also talk about the e.l.f. lashes I tried as well.

I started the day by picking up some brand new eyelash glue, because the old tube I had was starting to reek. I went with Duo Lash Adhesive, which supposedly dries clear (it takes some time, but for the most part it really does dry clear).

Unfortunately, as I was applying my falsies for the first time, I realized that eyelash glue is supposed to have a bit of a pungent scent. The one I threw away was probably fine. Still, don't skimp on eyelash glue, since it's half the battle.

Perhaps it was ambitious of me to do my first attempt before a date. I started getting ready 30 minutes early but still ended up running late because I was trying to blend the line of the lashes in with my liquid eyeliner. Still, I was proud of the finished result. The lashes made me feel very mod and glam — perfect for a viewing of The Man From U.N.C.L.E.

On the second day I figured out that tweezers help a little for applying the lashes, but not much. Instead, I had the genius idea to use an (unused and clean) extractor for tamping down the base of the lashes. The problem is that one side of the falsies pops up while I'm trying to adhere the other side. By gently pressing the base of the lashes down with the end of the extractor, I managed to get the lashes to adhere to my lids without getting them, and all of the glue, stuck to my fingers. I was never going to use the extractor for its original purpose (basically, popping pimples) because that freaks me out, so I was happy to give it a new use.

Once the second day was over, the only problem was that the base my lashes was covered in glue after removing the falsies. It was not particularly pleasant and, sadly, something I would have to get used to as the week wore on.

By the third day, I was getting tired of the struggle to apply falsies. It didn't seem to be getting any easier. I decided to try a different set of falsies. These are the e.l.f. Natural Lash Kit. I guess this looks pretty reasonable in photos but I can definitely tell you that in person I felt like Lamb Chop. Maybe long, curling lashes really aren't for me...

Thankfully, I wasn't really going anywhere this day so I just wore these around the house to see if I would get used to them. I didn't. I was constantly being startled by these giant lashes in my peripheral vision.

On day four, I just wanted to go Starbucks to do some work. Normally I'd put on some BB cream, a bra, and pack my laptop into my bag and I could be on my way, but not this time. I had to suffer through some more trial and error with my false lashes before I could get my caffeine and croissant fix.

In the end I was too hungry to be patient and the application of the falsies was terrible. I piled on some dark eyeshadow and eyeliner to disguise the poorly-adhered falsies, but in the end I just made myself look even crazier.

Forget about the fact that the glue was taking forever to dry (and therefore turn from white to clear); the black liner, dark eye shadow, and the one set of lashes being so ridiculously long they reached my eyebrow (not sure how that happened) made this look entirely unsuitable for a trip to Starbucks in broad daylight.

I wiped it all off, ripped off the falsies, and called that day a wash.

I decided to give the "natural" e.l.f. lashes another shot. Figuring I could just trim them a little with scissors to make them less silly, I ended up making them 1,000 times more silly.

Ooops. Another day for working from home, I guess. Also these got thrown away (lucky they were only $4).

Back to the eBay lashes! I've heard that some people buy tiny individual lashes or cut their falsies into smaller individual strips, then apply them painstakingly one by one. It seemed like a lot of work but also like it could be the answer to my problem of getting the entire lash line to adhere (and yes, I do cut the strip shorter to fit my eyelid).

It worked fairly well until I did a bad job with the last piece near the middle of my eye; that one went on all wonky and looked noticeably different from the others.

Also, I must have missed one piece of the lashes when I removed them because when I woke up the next morning and rubbed my eyes, I was confused and horrified to find what at first seemed like a little black spider fall off into my hand. That is a definite con for this method.

You would not believe how excited I was for the last day of this experiment. Since it was my last attempt, I did my very best. I trimmed the lashes to make the base a little shorter, waited a good 30 seconds to let the glue dry before applying, tamped down carefully with my extractor, and then spent at least 15 minutes trying to disguise the line of the falsies with eyeliner. Then I curled the lashes and added mascara.

Here's the final result, of which I'm fairly proud:

The only downside is that all that eyeliner sort of gets in the way of the full effect of the false lashes, but without the eyeliner you can easily see where the base of the falsies stops and the whole illusion is shattered. Maybe if I attempted a second week with the falsies I could have figured out a solution for that, but nope, I'm done. Too. Much. Effort.

I will say I got marginally better (and faster) at applying false lashes over the course of the week, but overall it's just not worth the time and frustration for me. In fact, this experiment taught me to love my natural lashes even more. I thought I wanted long, swooping lashes, but now I realize my short, straight ones do just fine. Kudos to you if you've mastered the falsie effect, but I'll stick with mascara from now on, thanks.

More like this
M.A.C.'s MACStack Mascara Made My Lashes Look Ridiculously Luscious
By Erin Stovall
Jennifer Lopez's Holiday Pedicure Has The Most Glam Snowflake Design
By Olivia Rose Ferreiro
7 Eyebrow Trends That Are Going To Be Everywhere In 2023
By Audrey Noble
This Week’s New Makeup Releases & More Beauty Headlines
By Audrey Noble
Get Even More From Bustle — Sign Up For The Newsletter