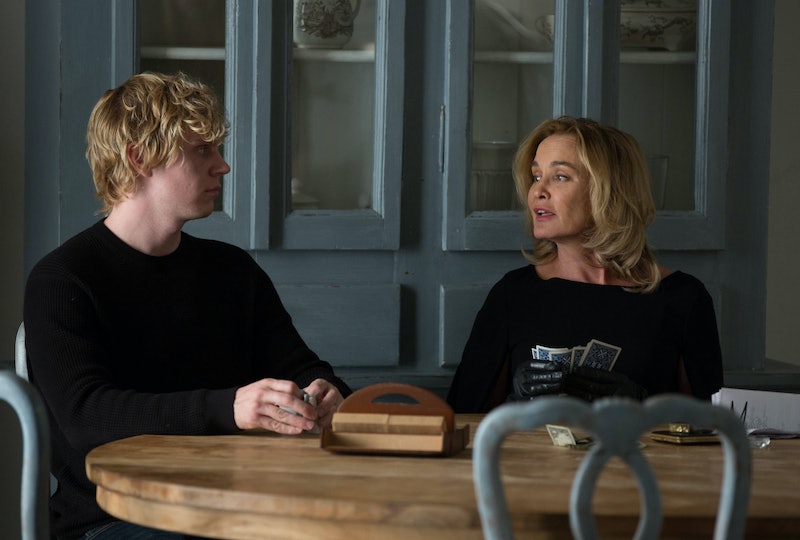 We’ve complained about the lack of consequences on American Horror Story: Coven . No one ever really dies — though the mid-season finale may have finally changed that — and it seems as if the consequences in this mystical New Orleans realm are nonexistent. Die a horrible death? No problem, there’s a spell for that. Make a deadly mistake? Still not a problem, we’ll just call Misty Day. With this wealth of resurrection and second chances on AHS, it’s hard not to find some meaning in it all. After all, for most of the characters in question, their lives seem to truly begin after they rise from the ashes — quite literally, in Myrtle’s case.

Flipping through the catalog of cast members, we find a long list of those brought back from the dead. Myrtle is pulled from the ash pile where she burned at the stake; Kyle is sewn back together and kissed to life; Madison is resurrected with the giant gash in her throat; Misty was burned at the stake and regenerated; Spalding serves almost the same purpose as a ghost that he did as a butler; the neighbor Joan gets a second chance after being shot, thanks to Misty; Madame LaLaurie, who’s been alive for years, but buried in the ground the entire time returns to the above-ground realm of the living; and Fiona returns from the brink of a pill overdose, thanks to Spalding.

These are, of course, the actual resurrections on the series, before we even count the mental and spiritual resurrections of other characters like Zoe, who becomes a new person when she leaves the suburbs and joins the coven, or Queenie, who finds new meaning in life when she changes sides to Marie Laveau’s world of voodoo, or even Cordelia, when she’s given back her sight. But what could we possibly cull from this wealth of second chances, other than frustration at the fact that everyone on this show seems to get one?

There is a resounding sense that the do-over actually fixes nothing without the will to actually change. Take, for example, Madison, who came back from the dead and quickly launched into a cruel monologue about the emptiness of life as a millennial compared to the emptiness of life as a resurrected corpse. Given the chance to live again, she’s still focused on filling the void — however primed for commentary on today’s youth that sensation may be. She jumps right back into using sex as a means of feeling something, and has sex with Kyle, another former corpse.

To show she has no feelings, she offers to share Kyle with Zoe — it was only a few episodes ago that she flipped a bus and heralded her crime as a means of proving that being raped had not broken her. Given a second chance on Earth, Madison still returns to her own patterns of attempted callousness. And like the time we saw the private moment in which she breaks down in the bathtub after the frat party, she shows her emotional cards — only to the audience — when Kyle and Zoe exchange “I love yous.” There are still four episodes of the unpredictable Coven, so anything could happen, but it seems that Madison is likely to react to this painful situation the same way she reacted to pain when she was alive: with violence and vengeance. If that’s true, she will prove that for some of us, second chances are simply another shot at business as usual.

The same question is held up to Fiona, whose brush with death seems to have made her extremely protective of the coven. Every time we think she’s about to strike out with irrational violence — like the time she slit Madison’s throat — she does the right thing. She keeps Kyle around and even fixes him… mostly. She allows Myrtle to stay and drops the “acid thrower” theory when Cordelia asks her to. She tries to make deals with Marie Laveau in the name of the coven’s safety. She pulls Misty aside at the neighbor’s house and asks her to heal Joan, but doesn’t pull any power play or other funny business with the potential next Supreme.

Still, at every turn, we’re expecting her to relapse. We’ve been taught, via the series other second comings, that death or fear of death doesn’t change you. Kyle is still sweet, however dumb he is. Misty is still at one with nature and all living things, despite having died at the hands of cruel people. Hundreds of years in the ground didn’t shake Madame LaLaurie of her racism. Hell, Joan came back from the dead and used her new found life to kill her son, just like she offed her husband in her former life. And of course, there’s Fiona’s mini-me from another mother, Madison.

Everyone gets another chance and almost no one uses it for anything other than a band-aid in their life's timeline. That leaves us simply waiting for the other shoe to drop with Ms. Goode. Fiona is inherently selfish, wildly narcissistic, and haphazardly violent, so it’s only a matter of time until she returns to her true self, right? There’s been no evidence that people are truly capable of change — except for a singular, powerful moment at the end of the mid-season finale which may have opened the door to the possibility.

As Hank slaughters the voodoo folks downstairs at Marie's salon, Madame LaLaurie’s severed, immortal head is situated on a table in front of a video of Civil Rights protests with a song Queenie’s mom used to sing playing over it. Unaware of the violence going on downstairs, Dauphine LaLaurie — the notorious murderer and a woman who’s committed unspeakable acts on her slaves and her daughters — begins to cry genuine tears. It seems impossible to think that someone who could have ever committed those atrocities in the name of racism could ever change her tune — after all, those acts come from a deeper place of depravity than a sense of intolerance born out of a racist environment. LaLaurie must have bigger demons lurking inside of her. But for just a second, it seems that she might actually be learning to change after decades of evil thoughts.

In the real world, we're taught that people don’t inherently change, which is why we're quick to accept that Madison is still Madison and Zoe is still Zoe, just with more power. It’s why Misty is still a sweet, spiritual witch even after she was treated so terribly before she was burned. It's why Kyle is still alright without his faculties, or his ability to not crush dogs' necks with his embrace. But as resolutely as AHS is driving the concept that second chances are a futile exercise in affecting change, or that enjoying some form of resurrection awakens something inside of a person that makes them want a new and improved existence, it’s also cracked the window open with LaLaurie’s emotional moment.

As we await the return of the series over the holiday break, we’re left to wonder if we’ve misjudged the concept of rebirth. While it hasn’t changed everyone on the series, it could have changed two of the most despicable characters. With that brief moment of breakdown, we’re gifted the hope that Fiona (and LaLaurie, too) can actually become good. And when we come out on the other side, it can go one of two ways: we’ll be rewarded for our open-mindedness or punished for it.

Only new episodes can answer this question, but for the time being, the series has at least given us the notion that a second chance can bring about change in a person. The possibility of Fiona’s earnestness throws our footing a little off going into the final stretch. If we’re not supposed to fear her — or Marie Laveau — any more, then the big bad of the Delphi must be one hell of a super villain.

More like this
Michael & Kathleen Peterson’s House From ‘The Staircase’ Has New Owners
By Kadin Burnett and Kayla Blanton
Danny Boyle's 'Pistol' Explores The Extreme Highs & Low Of An Iconic '70s Band
By Rachel Mantock
'This Is Us' Just Gave New Meaning To Jack's Death & His Love Story With Rebecca
By Grace Wehniainen
'Who Killed Sara?' Won’t Return For Season 4
By Brad Witter
Get Even More From Bustle — Sign Up For The Newsletter