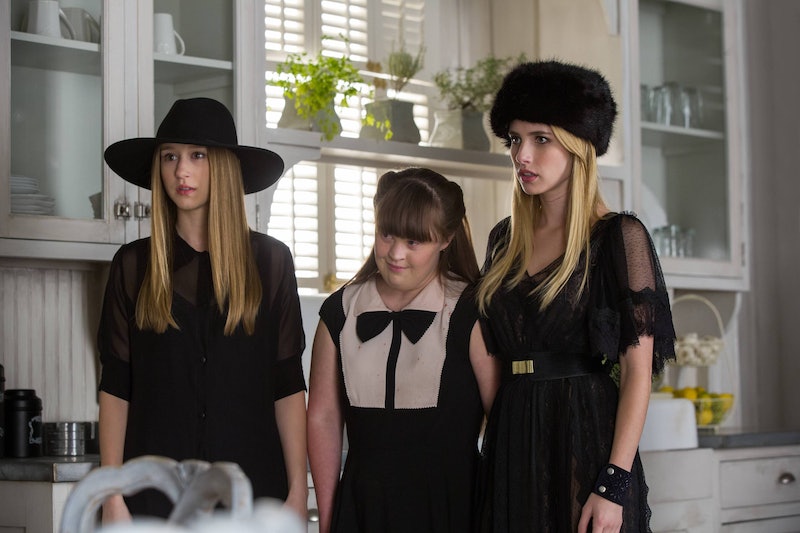 American Horror Story is a great show for a lot of reasons, but near the top of the list is the way it always knows how to CLOSE. Even when the previous 40 or so minutes of your episode have already featured some combination of bodily disfigurement, sex crimes, and monster attacks, AHSC finds some way to clear the bar. Make no mistake: This is a ridiculous television program, one that often cares more about what wacky shit it can put on screen than logic or plot progression. But Ryan Murphy and Co. absolutely know what they’re doing when it comes to keeping their audience hooked and entertained. In that sense, it’s one of the more classically constructed series around.

Case in point: tonight’s bullet-riddled ending, in which witch (WHICH WITCH) hunter Hank reneges on his deal with the Voodoo Gang and blows their hair salon HQ — and many of its employees — straight to hell. While the head of Madame LaLaurie watched footage of the Selma marches upstairs, Hank made his feelings for Cordelia clear to the tune of shooting Queenie in the chest and injuring Marie Laveau. Before he could kill her, of course, Queenie used her unique voodoo powers to shoot the guy through the head. Her head. But his head. Anyway, he’s dead, and the whole witch/voodoo/dark spirits world of New Orleans is just in major disarray. And THAT is how you end an hour of television.

Not that the scenes before that were lacking in the weird/gory/unsettling department! Top of the heap is probably Myrtle’s revenge on the witch council that burned her to (temporary) death, which she enacted by causing their full-body paralysis and then scooping out their eyeballs with a melon-baller. Standard witch stuff! Dulling the revenge side of it was the fact that Myrtle’s play was also a careful bit of DIY organ donation for Cordelia, who she’s always considered a daughter. It’s sweet, in that AHSC kind of way — horrific, supernatural violence committed at least partially in the name of very human emotions. You stop short of crying. But you feel it.

Anyone care to guess how Patti LuPone’s murderous Christian figures into this season’s endgame? She’s appeared in only three episodes so far, but raised her profile considerably last night when she murdered her hot Christian son. We should backtrack. Hank’s bullets found both Patti LuPone and her son last week — the former of whom was resurrected by Misty, the latter of whom wound up in the hospital. Nan read Luke’s thoughts and conveyed them to his mom, who was at first horrified but later comforted by the connection. Then she was horrified again when Nan went too deep and revealed that OOPS, Patti LuPone killed her husband — and Luke’s dad. When Luke came to at the end of the episode and immediately mentioned the very thing Nan had dug up, well… pillow over the face time. And another unhinged, BAMF middle-aged lady to add to the ledger!

So yeah, it’s safe to say some stuff happened tonight. We haven’t even discussed Fiona “fixing” Kyle to the point that he can speak clearly and play cards, or Misty’s resurrection power session with Cordelia, or Queenie forcing Delphine to watch Roots (“Oh Lord, no! No!”). On any other show, those would be the focal point of a recap. On Nashville , any one of them would be the most interesting thing that had happened all season! But we’re dealing with AHSC, in a crazy shit league of its own. And for that we should always give thanks.