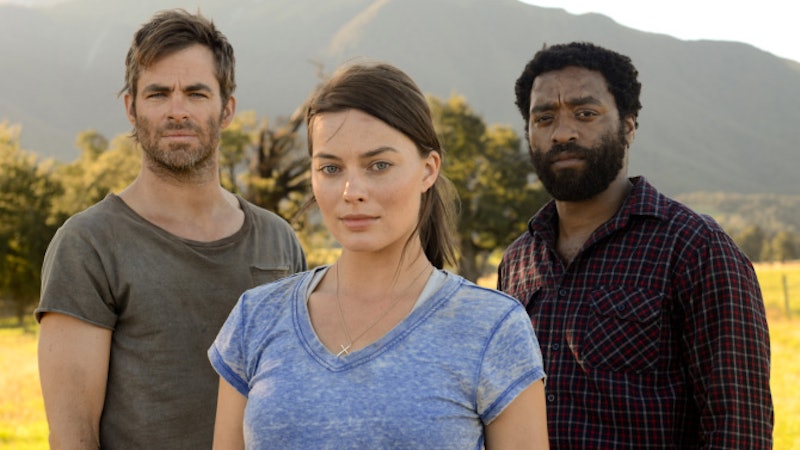 Let's just get it out of the way: Z for Zachariah, the new movie based on Robert C. O'Brien's 1974 novel, is nothing like its inspiration. Sure, there are some basic similarities between the two versions, but by and large, Z for Zachariah has major differences from the book it's based on. (Spoilers ahead!) For one thing, there's the addition of an entirely new character, Caleb (Chris Pine), which may not seem like a big deal for some movies, but for one that revolves around the last remaining people on Earth, it's a pretty huge change. There's also Ann's age, the behavior of John, the fate of Faro — if you're a fan of O'Brien's beloved work, be prepared to see an adaptation that's very little like it.

That said, that's not necessarily a bad thing. While O'Brien's novel is a classic for sci-fi fans, the movie more than holds its own as a worthy addition to the post-apocalyptic genre. Still, it's understandable if the differences are had to take — after all, they're not exactly minor. To prepare yourself, here are the 13 biggest changes Z for Zachariah , the movie, makes from the book. Again, beware — lots of spoilers ahead.

This is the biggest change, by far. Despite playing a large role in the movie, Caleb, Chris Pine's character, doesn't exist in the book. The only two real characters are Ann and John, and so everything that happens in the movie — the fights, the jealousy — don't occur.

In the book, Ann is 16 years old. Ann's age in the film is not stated, but she's played by the 25-year-old Margot Robbie, and is implied to be around 18 or 19. The change was a needed one, considering the sexual content of both the book and film.

It Takes Place In The Midwest

Although it's never specifically stated where the movie takes place, Ann and Caleb have Midwestern accents, and she grew up on a farm. In the book, John came from upstate New York, so it's more likely the book's setting was somewhere in that area.

In a very cool change from the book, John is black, played by Chiwetel Ejiofor (12 Years a Slave). There's no "reason" for the character to be a different race; it's simply a decision made by the filmmakers, and clearly, it's a good one, because Ejiofor is marvelous as John and it's hard to imagine the role being played by any other actor.

John Freaks Out When He's Been Poisoned

In the film, John hyperventilates when he realizes that he's been bathing in radiation-heavy water, and is practically hysterical when Ann tries to help. It's completely understandable behavior, but in the book, John is eerily calm after getting sick, a fact that impresses Ann.

Ann's In No Rush To Repopulate The Planet

Although she eventually attempts to seduce him, Ann is initially more hesitant when it comes to a future with John. She's grateful to have a companion, but doesn't have, or at least vocalize, any intention of marrying and having children with him just yet. In the book, though, Ann looks forward to starting a family.

There Are No Flashbacks

Relatively early in the novel, a sick John has flashbacks to his time underground, and recalls how he shot his co-worker when he tried to steal his safe-suit. Although this event is discussed in some detail in a dinner scene in the film, it's not in the form of a flashback, and John is perfectly healthy when he tells Ann and Caleb what happened.

Although movie John displays some jealousy and makes some questionable choices (including that big scene at the end), he is, for the most part, a decent man who loves Ann. But in the book, he criticizes Ann often, forbids her to do certain things, and orders her around like he's her superior.

John Isn't Drunk When He Almost Attacks Her

In the movie, John is extremely drunk when he corners Ann and nearly attacks her, but she manages to fight him off. It's a horrific action, but his intense intoxication is at least partly to blame for his actions. In the book, though, an already-scared Ann is woken up by John, and he nearly takes advantage of her before she escapes. Afterwards, she hides in a cave out of fear.

They Keep Living Together

Since John's behavior isn't nearly as bad in the movie, he and Ann live relatively peacefully together, even with Caleb there, as well. In the book, though, his actions and controlling tendencies cause Ann to decide to live apart from him; much to John's disappointment.

They Live Happily Ever After

Well, not really — how happy can you be when you're the only two people left on the planet? — but it's a lot better of an ending than what happens in the book: a furious John traps Ann so she can't get supplies, shoots her in the leg (which causes her to become quite sick), and burns her belongings, among other terrible things. His anger becomes such that the final part of the book centers around Ann's attempts to outwit him and avoid being killed. And then there's this detail...

Faro, Ann's dog, is very much alive throughout the entire movie. But in the book, Ann is nearly forced to kill Faro in order to prevent a now-obsessed John from tracking them. Although she doesn't do it, Faro does eventually die, after becoming poisoned in the water. I, for one, am very happy they left that detail out.

The book ends with Ann, having finally escaped a now-defeated John, deciding to walk west, where John once saw birds flying. The movie's finale is nothing like this; instead, Ann and John, with Caleb no longer in the picture, go back to their normal routine, filled with meals, hunting, and piano-playing. One day venturing out to find other people is not totally out of the question, but it's not in Ann and John's immediate future.

So clearly, not the most minor changes. Regardless of whether you like them or not, it's interesting to see a movie adaptation that doesn't feel defined by its source material.