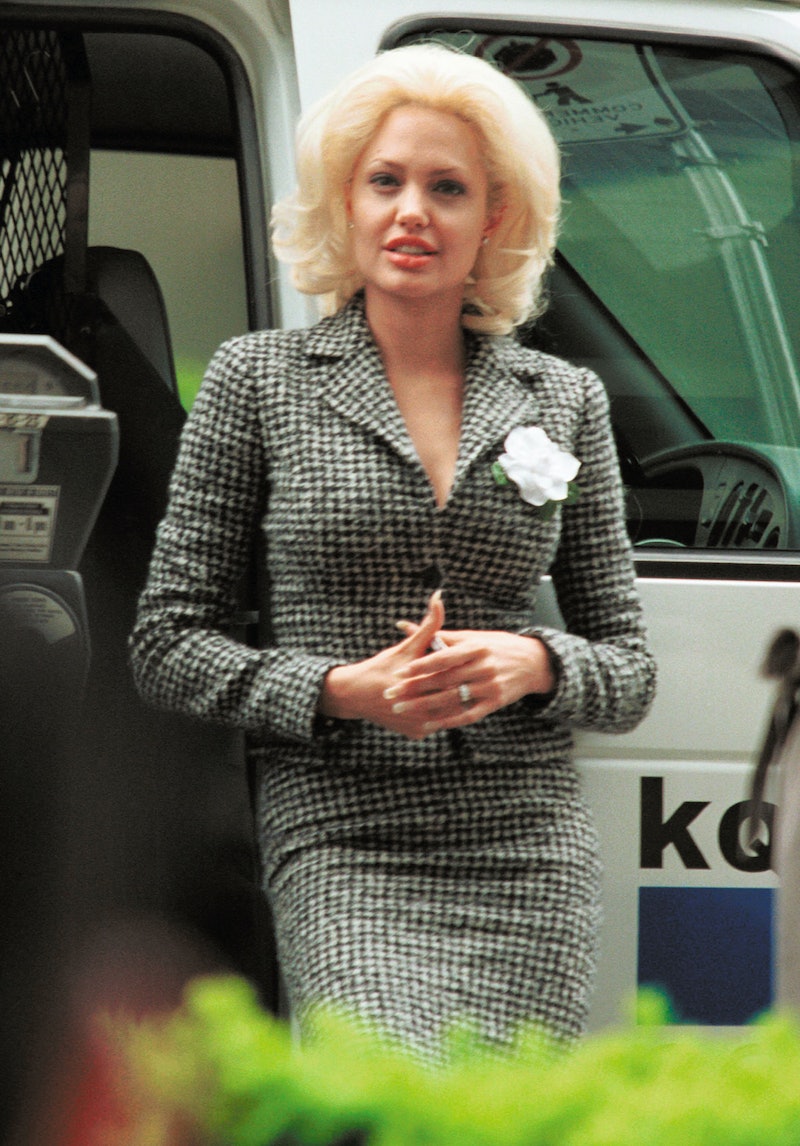 The average lawyer, investment banker, or chef isn't asked to dye their hair for work; in fact, it may be even be illegal for a superior to ask their employee to make such an aesthetic change. However, actress Megan Fox has blonde hair for Teenage Mutant Ninja Turtles 2 — and she's not alone. Though Fox's new 'do is likely a wig, its not uncommon for actors to dye their strands whenever they get a new gig. In addition to gaining and losing pounds for film roles, Hollywood's finest are also required to transform their locks to fit the appearance of their characters, hence Bradley Cooper's curled 'do in American Hustle and Lea Seydoux's indigo dye job for Blue is the Warmest Color.

In fact, the simple change of a hair color can transform an actor's entire mien, from posture to preferred ensembles. Case in point, critics often attribute Marilyn Monroe's rise to prestige to the moment the former brunette chose to give her strands the platinum treatment. Mere hours after premiering her bleached 'do, the media is already clamoring to dub Fox the next Marilyn — or at the very least, an incredibly convincing blonde. In celebration of Fox's new hue, whether permanent or adopted solely for the next several months of filming, here are 15 other actresses who dyed their hair for film and television roles.

Angelina Jolie's halo of blonde hair certainly caught the attention of paparazzi and fans during the filming of Life or Something Like It.

Actress Pauley Perrette's trademark ebony hair hue may have been a staple of NCIS, but Perrette's allergy to the dye resulted in an emergency hospitalization.

3. Margot Robbie in Z for Zachariah

After simultaneously enchanting and shocking audiences with her dramatic turn as a blonde with attitude in The Wolf of Wall Street, Margot Robbie darkened her locks for the forthcoming film Z for Zachariah.

4. Nicole Kidman in Nearly All Of Her Films

Nicole Kidman's hair has adopted every color under the sun from platinum blonde to deep chestnut and back again. I imagine a deep conditioning routine has been implemented to prevent permanent damage.

As Spider-Man's Gwen Stacy, Emma Stone was required to dye her vibrant red hair blonde — a shade the actress revealed was her natural hue.

Scarlett Johansson adores a good dye job, but the actress's red-infused brunette color for the character Black Widow in Iron Man 2 was a new shade entirely.

7. Sandra Bullock in The Blind Side

A habitually brunette Sandra Bullock tried her hand at being a blonde for 2009's box office hit The Blind Side .

Sofia Vergara's rich caramel hue may seem like a foregone conclusion, but Vergara is a bottle brunette in reality. Her naturally gifted color? A beautiful blonde shade.

Though Jennifer Aniston's hair has taken on many shades over her years in the spotlight, Aniston returned to her brunette roots for roles in Terrible Bosses and Cake.

10. Carey Mulligan in Inside Llewyn Davis

Yet another actress unafraid to experiment with color is Carey Mulligan, whose hair took on a deeper hue for Inside Llewyn Davis.

11. Christina Hendricks in All Of Her Roles

Clairol spokeswoman Christina Hendricks is quite vocal about her choice to try a reddish hue during her modeling days, a shade now eternally associate with Mad Men's Joan Harris.

13. Taylor Swift For The Giver

Eternal blonde Taylor Swift achieved an unexpectedly dramatic appearance when the singer dyed her hair brunette for a cameo in The Giver.

14. Jennifer Lawrence in The Hunger Games

Jennifer Lawrence played with various brunette hues before settling on the ideal shade to play Katniss in The Hunger Games, aided by a number of professionally manufactured wigs.

Though none of the hair hues adorning the cast of Twilight appeared particularly natural, Nikki Reed's severe blonde shade was the most glaring — and the most detrimental to the actress's locks.