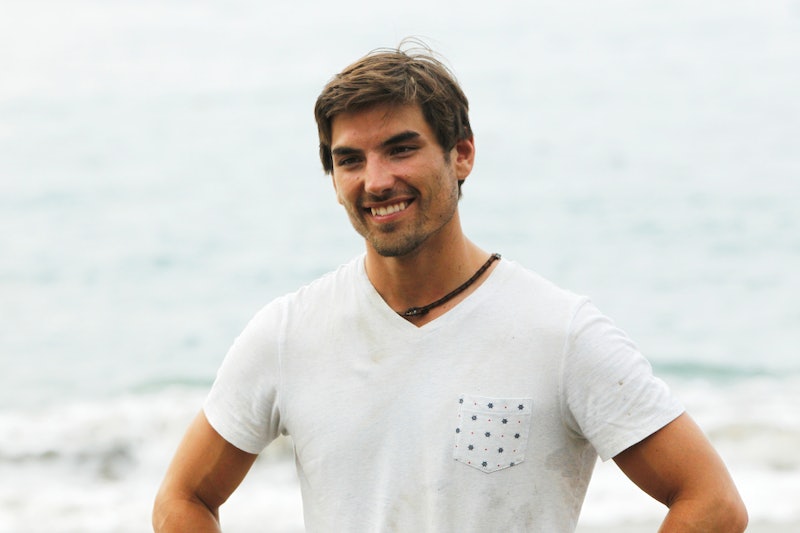 If we were just going by what we've seen so far, it would be hard to believe that Bachelor in Paradise star Jared, the restaurant manager with the finest bone structure in Mexico, is really looking for love. It doesn't seem like he's there for the Wrong Reasons, per se — long, hard stare at you, Joe — but since arriving in Sayulita, Jared hasn't seemed to find any of the women remotely interesting romantically. But, BiP contains a rather small pool of women. So what is Jared's type, if he could have anyone to choose from? The guy seems like a total softy, but he hasn't been able to really connect with anybody. Although, there may be a reason for that...

Because BiP is not a vacuum, we know Jared from somewhere else: The Bachelorette, where he fell totally in love with Kaitlyn and now he can't get over her. Apparently. It's reasonable to assume that Jared isn't the type of guy who would come on this show to mess with people's emotions — glare in Joe's general direction intensifies — so he must have come to Paradise thinking he might meet someone and be able to get over Kaitlyn. But, that hasn't happened. So just what kind of person was Jared looking for? We have limited resources on what Jared's "type" is, but here's what I think he's be searching for based on his personality.

Clare and Ashley I. are pretty different people but they have a few things in common besides Jared not liking them back; mainly, I think they could both be considered a little... intense. I mean, they love a good sobbing meltdown. So, neither of those seem to be the best fit for Jared, who seems pretty laid-back himself.

Jared is... not the best talker. Whether that manifests in not being totally honest with Ashley I. because he wants to spare her feelings or having kind of clueless word vomit with Clare about their age difference, Jared does best when he's not uncomfortable (this is why he could not be the Bachelor... we all remember Chris). But there are always going to be uncomfortable moments in relationships, especially in the beginning, so Jared needs someone who can help him along in expressing his feelings — his real feelings.

Speaking of Clare... I'm not going to fault anyone for preferring to date people their own age, but let's just avoid going on a date with anyone who you already feel like you're not a match with, yeah Jared? Any more conversations like this one should be avoided at all costs.

Judging by his connection with Kaitlyn, Jared just wants someone who he can have a good, easy time with. Ashley and Clare are both fun in their own ways, but drama seems to follow them; or they seem to attract it; or some combination of both. Going off his breakup conversation with Ashley, he just needs the connection to be there — no pushing it, chasing it, or explaining it into existence.

No, no, no, that's not to say that Jared and Kaitlyn are meant to be or that he's not going to be able to get over her. He is. But, he's probably looking for someone like her, and no one exactly like that — laid-back, funny, and honest — is currently in he BiP cast. So, Jared and his razor-sharp cheekbones are probably going to have to find another way other than reality TV to move on from Kaitlyn and find that woman who's just his type.