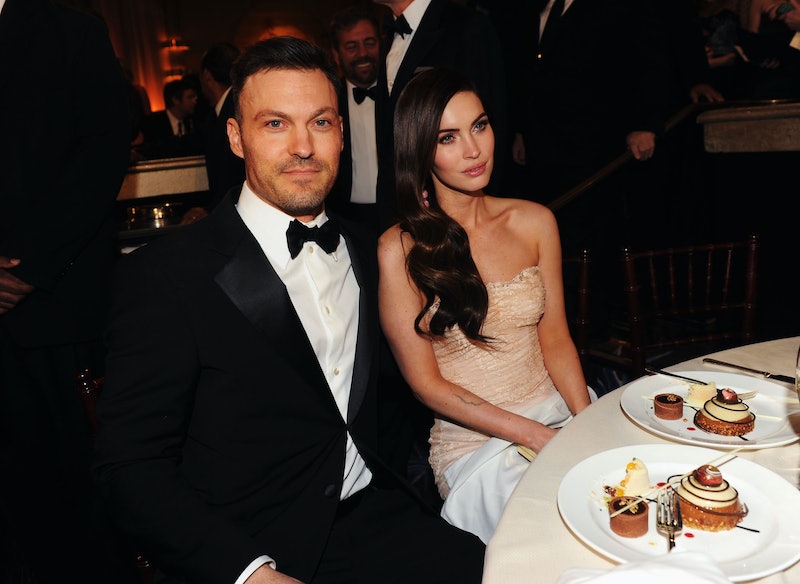 The big news isn't just that Megan Fox and Brian Austin Green are divorcing after 11 years together and two children (which is super sad and shocking), it's that the outcome of their split may share very little in common with most people's divorce expectations. In many cases, especially those in which women have stopped working or work part-time in order to care for children, it's a given that they will get spousal support to help pay for household expenses and the cost of living. But that isn't always the case — especially these days. Green is the one who may receive support from Fox, according to Us Weekly, reportedly because he suffers from vertigo and has been unable to work as much as a result of a head-on automobile collision last year.

This news is significant for no other reason than because it serves as a reminder that times have changed and that what some previously thought was the norm during divorce proceedings is far from it in 2015. To my knowledge, the seven celebrity women below didn't marry for money, and when things didn't work out, it made perfect sense that they — the breadwinners, in a traditional sense — would be the ones to provide monetary support.

The couple met in 2004, got married in 2010, and have two little boys (Noah, 2, and Bodhi, 18 months). But when they publicly announced they were separating in August 2015, people began wondering whether Fox, 29, would be ordered to pay spousal support for Green, 42, because of what TMZ referred to as their "large disparity in income and income potential." Green and Fox were in a car accident last December while driving their Range Rover, which caused Green to suffer from vertigo and prevents him from working as much. Fox, meanwhile, appeared in 2014's Teenage Mutant Ninja Turtles, has two projects in the works, and is worth an estimated $5 million, according to Celebrity Net Worth.

Was anyone not thinking bad thoughts when Spears married her backup dancer after what seemed like three days of dating? Considering how the pop star is worth a reported $165 million, according to Celebrity Net Worth, there were few men she could marry who wouldn't be entitled to spousal support if things ended poorly. Spears and Federline divorced after three years and the singer reportedly pays him $40,000 a month in alimony.

After three years of marriage, Jessica Simpson and Nick Lachey divorced in 2005. Because of their hit reality show, Newlyweds, and her singing career, Simpson became a household name and her earning potential grew during their time together, according to Forbes. Simpson reportedly offered Lachey less than $2 million, but by the time they finalized their divorce in 2006, he apparently received less than half of their estate.

It's easy to forget the former coach on The Voice, who has two children and is now engaged to Matthew Rutler, was married to Jordan Bratman from 2005 until 2011. The two share a son, but Aguilera said she called it quits because they had both grown apart while growing as people. Bratman, a music marketer and producer, is worth $15 million, which isn't exactly shabby, but compared to Aguilera's $150 million net worth — well, it isn't surprising that she would have to pay up. Even though the couple reportedly signed a prenup, which stated that Bratman wouldn't be able to touch the singer's money, she allegedly got tired of waiting, moved out of the mansion they shared and into another home with Rutler, and reached an undisclosed settlement with Bratman that allowed him to walk away with a portion of her earnings.

Similar to Britney, it's really kind of impossible for someone like Madonna, who is worth an astonishing $800 million, to meet and marry a person who matches her in terms of economic status and earning potential. None of that seemed to matter to the Material Girl when she tied the knot with director Guy Ritchie in 2000. When they divorced eight years later, she was the one who had to pay him a settlement, but the figure that was leaked to the media at the time blew everyone's minds: between $76-$96 million — a "record payout," according to ABC News. Although Madonna almost certainly had to pay alimony, it was probably less than the rumored amount since the couple actually released a statement about it:

We have tried to maintain a dignified silence regarding the details of our divorce for the last few months whilst accepting the obvious media interest. A misleading and inaccurate statement, specifically in relation to the sums of money involved, was wrongly issued ... this week. The financial details of the settlement will remain private, save to say that both of us are happy with our agreement.

Anna Faris is head over heels in love with husband Chris Pratt and their little boy Jack. But before she and Pratt made it official in 2009, she was married to actor Ben Indra from 2004 until 2007. During that time, she earned a lot of money starring in films and TV shows like Brokeback Mountain and Entourage and out-earned her husband. As a result, Faris agreed to pay Indra $900,000 and split property and acting royals, according to People. At least there was a very happy ending for her after their divorce, right?

More like this
Britney Spears Set A Wedding Date With Fiancé Sam Asghari & Previewed Her Dress
By Bustle Editors
Thank U, Ex
By Rosemary Donahue
Is Megan Fox Pregnant? MGK Gave A Shout-Out To Their “Unborn Child” Onstage
By Hugh McIntyre
Kelly Osbourne Found Love In Her Best Friend & Now They're Expecting
By Vivian Iroanya and Rachel Mantock
Get Even More From Bustle — Sign Up For The Newsletter