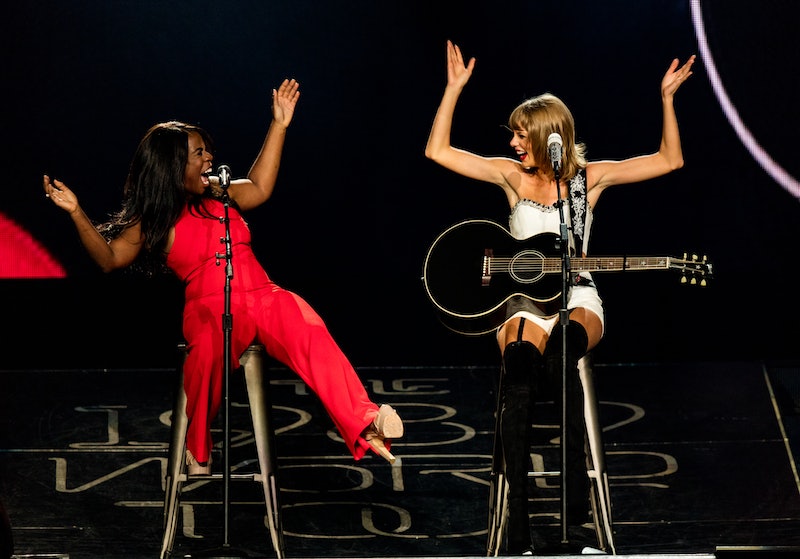 Everybody listen up, because I think I might be a genius. I just watched the video of Uzo Aduba singing a duet with Taylor Swift, and I have the best idea ever: Swift should host a talent show where all of her friends perform and we get to see the things they're secretly really good at. Because, I don't know if I mentioned yet, but Aduba is a seriously talented singer. The Orange Is The New Black actress joined Swift onstage for her Aug. 22 show at Los Angeles' Staples Center as part of the 1989 World Tour to sing "White Horse," and I was pretty blown away. Not just by the fact that Swift knows and is friends with Crazy Eyes, although my head was still spinning from that revelation after Aduba joined Swift onstage at another show back in July, but because this means Aduba is officially a double threat. (And maybe even a triple threat, if we can just find her an outlet to show off her potential dancing skills!)

Anyway, my point is, Taylor Swift has what's easily the world's most enviable collective of talented, intelligent, impressive best friends, and I'd love for her to organize some kind of Talent Night where I could really take in what everyone's bringing to the table. Otherwise I just have to sit here jealously scrolling through Instagram wondering what they all talk about when I'm not there.

There could be acts like singing, dancing, cookie-baking with audience samples, demonstrations on how to do the perfect runway walk, Lorde showing us how she picks the perfect lipstick, celebrities introducing us to their pets, really everything. And, of course, Swift herself wouldn't be allowed to compete, because obviously she'd win in every category. Although Aduba really is holding her own in the video of their performance below.

If that's a talent that Aduba was keeping from us by doing more acting than she does singing, imagine what all the rest of Swift's friends have up their sleeves! What if Jaime King can juggle? Or the girls from HAIM can tightrope walk? Or maybe Ed Sheeran is really good at training lions? I just realized I'm describing a famous person circus, and I'm not even mad at it. Make it happen, Taylor Swift. Please!