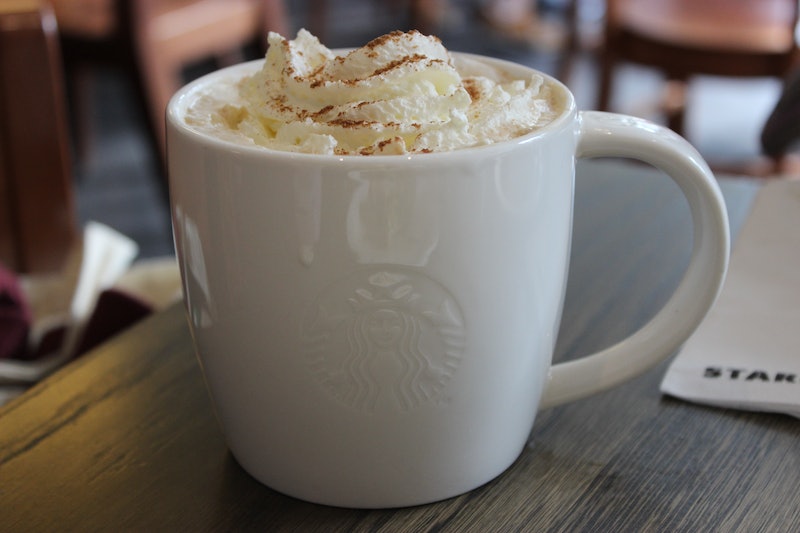 Starbucks fans, mark your calendars. The pumpkin spice latte's official release date is Sept. 8, and this year your favorite fall beverage promises to be better than ever. Starbucks announced it's unveiling a new and improved pumpkin spice latte that boasts real pumpkin puree, and no artificial ingredients, which I think we can all agree sounds like pretty spectacular news. But what does the new pumpkin spice latte taste like? The original recipe has gathered a devoted following for a reason. How will the all-natural PSL compare with the seasonal drink that instantly won over fans when it made its debut in 2003? I had a chance to try out the PSL 2.0 at a recent Starbucks tasting, and let me tell you, this is still every bit the fall drink you know and love.

Sitting at a New York City Starbucks table with Peter Dukes, the inventor of the original PSL, I was a little tentative to try the new pumpkin spice latte at first. I'm all about all-natural ingredients, and the idea of sipping on real pumpkin mixed with rich espresso seemed like a dream come true — but I was also nervous that the whipped cream-topped shot of pumpkin spice latte sitting in front of me would taste vaguely unfamiliar. I mean, messing with perfection can be a scary thing. But, as Dukes was quick to explain, even with its new pumpkin-y makeover, the new PSL still tastes exactly the same as it always has, just with brand new ingredients. "It's just a cleaner version," he says. "We're really proud."

Upon taking my first sip, it only took about half a second for me to realize he was absolutely right. The whipped cream, sprinkled lightly with pumpkin spice, was just as divine as ever — and once I got to the actual beverage itself? It was like coming home after spending too many months away. Everything tasted exactly the way I remembered, if not a little better. Maybe it's the all-natural pumpkin, maybe it's the perfectly mastered mix of cinnamon, clove, nutmeg, and ginger, maybe it's just the fact that I haven't had my hands on one of these in almost a year, but the new pumpkin spice latte tastes blissfully just as it should — like autumn has arrived.

Dukes says this is the first time Starbucks has dared alter the PSL's ingredients since it first hit stores 12 years ago. This year's incentive to remove artificial ingredients comes from years of fan feedback. "We asked ourselves, do we think we could do better? And we thought that we could," Dukes says. It took the Starbucks team three months to develop the updated version, but the result is well worth the effort. "The second you take a sip, it just takes you to fall," he says.

And honestly, after months of sweltering hot weather, fall is exactly where I want to be.