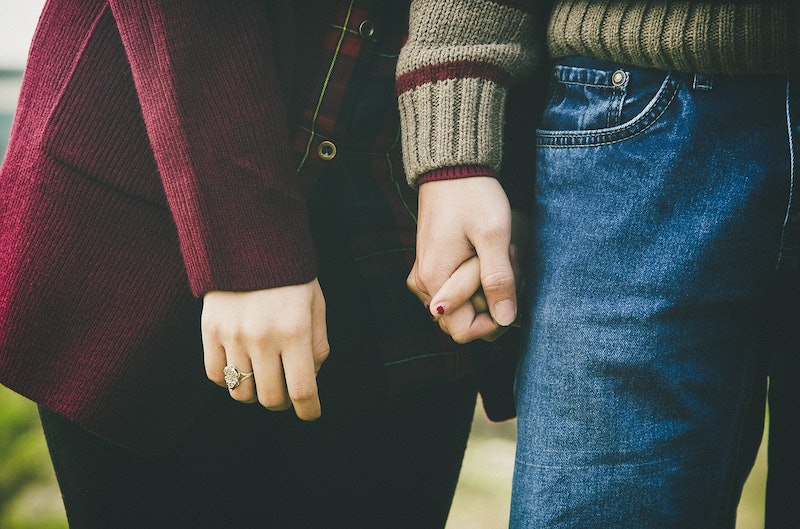 Being told you should like a nice guy who you don't find attractive is the literal worst. I have been on 11 dates (11 DATES) with a guy I couldn't bring myself to kiss more recently than I want to admit because 1) he was really interested, 2) I wasn't into anyone else was at the time, and 3) I was getting so much pressure from family and friends to just "date a nice guy already," after several weird situations with jerks that I wanted to really try with this one. That guy actually was a nice guy — our personalities were just not a fit — but I remembered doing a sneaky sniff test of his shirt and not. feeling. it. Chemistry is real.

I would also advise against dating the "nice" guy: the guy who isn't really nice, but rather is desperate. He wants a girlfriend. You are a girl, and nearby, so that makes you Perfect For Him. He will, without much concern for your feelings on the matter, overwhelm you with needy gestures to win your heart, and probably call you a bitch when you finally lay it out for him that you just don't feel the same. He also doesn't seem aware that women need to be attracted to him too, or he'd stop letting his mom cut his hair. THERE I SAID IT. This guy is a probably a friend of a friend who randomly took his shirt off at group hang-out indoors in the wintertime while making eye contact with you and you felt so awkward about it that you had to fade out from the entire group. Speaking hypothetically, of course.

The sweet spot is the GOOD guy: the guy who will refrain from huge romantic gestures until he knows you well enough to include an inside joke on the card that comes with the flowers. He's not infatuated with you (or maybe he is, but that's only part of it); he's in like with you. He sees your qualities as a person, not just your winged eyeliner skills, and that's why he's he's going a little crazy.

The tough part is, it's really hard to sort these guys from the douches with acting skills. Only time really sorts the two. But usually, the nice guy — nay, the GOOD guy —is someone you already know, who sneaks up on you. You probably didn't notice him because he's been getting to know you before pulling the big romance guns out. That's as it should be. You'll already know he's different though. If you're friends, he's where he says he'll be. He teases you, but apologies right away if he hurts your feelings. He checks up on you. He's "around" for you. And it's not a coincidence.

Dating these guys (provided you're attracted to them, and it's funny how that attraction can sneak up on you), is a happy, healthy, life-affirming experience. Not that you shouldn't already know your worth, but dating a good guy affirms what you know: you're amazing, you deserve to be treated well, and that love should feel good.

Here's a few other reasons to give the nice guy a fair shot:

Being respected, treated well, listened to, cared for—it's undeniably healing. It feels really good to be able to give those things in return too, knowing it's not a power struggle with this one.

2. It Teaches By Example

You can learn a lot about how a relationship should look from a good man. And you can learn to be a better partner yourself.

Being in a relationship with a decent guy is not about turmoil. You'd be amazed how much simpler it is to plan things from birthday parties to Saturday night movies when your dude is responsive, available, and not likely to flake at the last minute with a bizarre excuse.

It's easier to coax a little naughtiness out of a good guy than it is trying to get a hot bad boy to be a caring boyfriend.

5. You Can Be Yourself

He already likes you, and shows it. You don't have to pretend to be someone else to keep him interested.

No games, no manipulation to get what you want: he cares, and he wants to make you happy. Just ask for what you need, talk about what hurt you, apologize when you mess up, and let it be real.

7. You'll Have So Much More Energy For Other Parts Of Your Life

Amazing what you can accomplish when your love life is simple, happy, and secure.

He's not going to disappear as soon as he realizes you like him. WHAT???? I know right.

9. You Can Trust Your Feelings

Those awful, toxic, tug of war relationships can feel like love like simply because they're emotional and confusing. When you love a nice guy you'll know it's real—you're not mistaking pain with depth of feeling because he's not hurting you.

Family and friends are going to like this one. Enjoy not having to make excuses for his bad behavior, or failure to show up, and be prepared for how happy but also slightly jealous they'll be to see you smiling all the time.

Making your most intimate, important relationship a connection with someone who's actually worth your time and feelings is a gift to yourself. You don't deserve anything less.