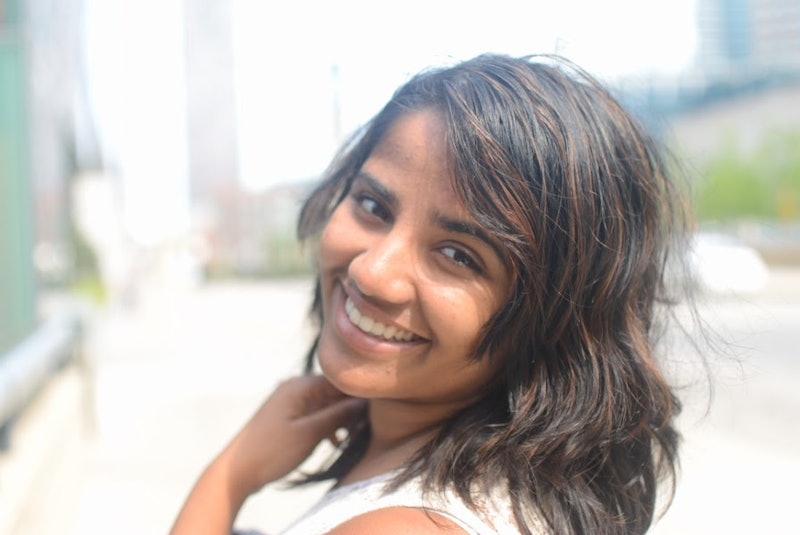 This past Sunday afternoon, I was on public transit with a couple of friends, coming back from Chicago's Greektown after a wonderful afternoon of sampling different Greek dishes and drinks. When the train stopped at Addison, it was clear that a Chicago Cubs game had just ended at Wrigley Field, because a bunch of tired fans hopped on board. One of them in particular, just across the aisle from us, caught my friend's eye: a tall white man with a "white pride" tattoo on his elbow. This was the beginning of an hour-long, nerve-wracking train ride, during which this man sat across from me and said explicitly racist things about me to his friend, making sure I could hear every word. It was almost laughable. Women's Equality Day is on Wednesday, and there I was: a woman of color on public transit, dealing with hateful language about my identity.

A few stops after Addison, the man looked around for a seat in the once-crowded car. He smirked at his friend, then very intentionally sat down in the seat across from me. I tried to look anywhere else but at him, and in doing so, I pretended to be asleep on my friend's shoulder.

My friend is a white man, and when I did this, I heard a disparaging comment about how we looked ridiculous — the man with the tattoo said that white people like my friend were "part of the problem." He evidently did not approve of my two white friends' decision to associate with me, nor did he think the sight of a white man and a woman of color was appropriate.

It was certainly not the first time I'd been the subject of racist or sexist remarks in public. White men often jeered at me while I was studying abroad in Paris, and I've had people stop me on the street in Chicago to ask where I'm "really" from. They want to know if my culture "oppresses me," and wonder "why Indians always seem to work at 7/11?" And yet, what happened on Sunday shook me up more than I expected.

It only got worse when we walked out onto the platform to wait for our connecting train. The man and his friend were waiting for the same train, and at one point, I received a FaceTime call. I made the mistake of walking a few feet away from my friends to take the call. The man with the white pride tattoo thought I was taking a photo of him, so he walked away, only to come around to the other side of the platform, toward where I was standing. I quickly walked back over to my friends, but the damage had been done. When we got on the next train, the two men were in our car yet again, and though they were a good ten feet away from us, they continuously looked over and glared at me.

I guess I should count myself lucky that both of the friends I was there with were white. I shudder to think what would have happened had I been with a group of other women of color — or worse, alone. The two men got off several stops before we did, but what might have happened had they gotten off at the same time? Thankfully, we were in broad daylight, but what if they had found out where I lived, or tried to attack me and my friends?

As I've written many times, the personal is always political for me. But despite extensively writing about and reflecting on my identity, I don't take the time to think about how people have been personally racist or sexist toward me. I try to not let get it to me, because the actions of one man with a white pride tattoo seem to pale in comparison to the state of emergency created by structural violence. But thinking like this — and wanting so badly to avoid giving white supremacists the satisfaction of knowing they've hurt me — is actually an example of me invalidating my own feelings and my own pain.

I can and will continue to ally myself with other movements for justice. But I am starting to realize that I also have to be an ally to myself, and fight for myself. On Women's Equality Day, I will celebrate all of the amazing women in my life and in the world who are fighting so hard just for the right to exist. I don't want to just talk about intersectional feminism. I want to live it.

I want to make it as clear as I can that the intersection of my identities as a South-Asian-American and as a woman inform how I live, how I am perceived, and how I am treated. I refuse to downplay the fear I felt on the train, and I don't think that is an overreaction. The man with the white pride tattoo may have just been one person with despicable beliefs, but there are many people out there like that, and some of them occupy positions of power. It is therefore an act of protest for marginalized people to exist in public spaces, and I would like to think that I made him at least vaguely confront his own discomfort just by being on that train with him.

I am very conscious of the fact that I am not afforded all the same privileges as a white man in this country. My fear on Sunday was a manifestation of this consciousness; of knowing that women of color are often criminalized for asking for help, and that people with privilege can get away with a lot of scary things. But now, more than ever, I am proud of my complex, nuanced identity. I am proud to be a brown woman, even in a country that regards my brownness as a threat, because my intimate ties to my culture are something that nobody can take away from me.

So on Women's Equality Day, make sure your feminism includes every woman, and not just those who occupy the public spotlight. Respect and affirm the lived experiences of other women, because individual acts of oppression can often add up to a lifetime of pain if we do not stand in solidarity with one another.

More like this
The Church Of Scotland Votes To Allow Same-Sex Marriages
By Sam Ramsden
Sandra Bullock, Girlboss Extraordinaire
By Matt Harkins & Viviana Olen
How To Support Gun Control Reform Right Now
By Morgan Brinlee and Carolyn Steber
36 Influential AAPI Voices On Pride, Power, & Progress
By Faith Xue
Get Even More From Bustle — Sign Up For The Newsletter