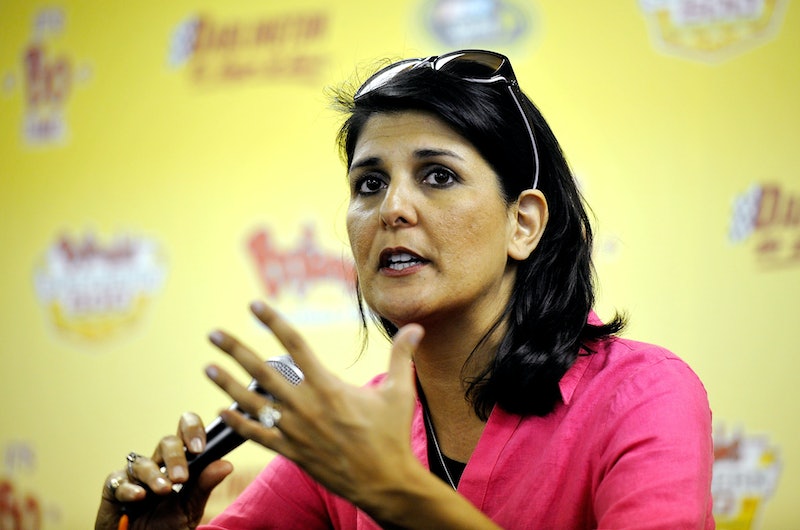 When Democratic presidential candidate Bernie Sanders talks about racial justice, he has a habit of referring to three specific groups of people: white, African American, and Hispanic. I think Sanders is finally finding his footing in movements like #BlackLivesMatter, and actions like those at Netroots Nation and at his Seattle rally are pushing him in the right direction. But while I'm glad to see that major Democrats are finally starting to talk explicitly about racism, there is something I still don't completely understand — why are Asian Americans practically invisible in the political sphere?

Deciding to become a journalist was a controversial choice on my part. My parents were largely supportive of this decision when I made it five years ago, but we run in South Asian circles that are not nearly as enthusiastic. Growing up, "education, job, money" was like a mantra — we were immigrants to America, and I was supposed to refrain from making trouble, study, and get a good job (preferably as a doctor or engineer, of course). Politics were typically out of the question; family friend gatherings weren't for talking about politics, but about technology, cricket, and "that aunty's new sari."

This is, of course, not true of all Asian Americans. For instance, I write about politics, I'm involved in political organizing, and I pay close attention to local and national elections. But I cannot discount how the immigrant experience informs one's willingness — or lack of — to pay attention to politics. In my eyes, my personal has always been political; I am a woman of color in a system that simultaneously tries to portray me as a model minority while perceiving my brownness as a threat. However, until I left the confines of Silicon Valley for college, I was almost as apathetic about American politics as my family friends. And apathy is dangerous, because it engenders complicity. But for many Asian immigrants to America, the struggle to succeed is a very real and very urgent one. It precedes almost everything else, because it determines whether or not we will be able to stay here, to get a green card, to ultimately obtain citizenship if we want it. What is political jargon in the face of that lived experience?

But our invisibility in American politics is not entirely our fault. After all, a lot of Asian Americans are out there doing the hard work of pressuring politicians on issues of racial justice and showing their solidarity with movements like BLM. They draw attention to the intersectional nature of racism, classism, sexism, and other forms of oppression. And Asian American political participation is increasing, albeit slowly. The other side of this issue is how politicians talk about and treat us. We have relatively limited political representation, with only one Asian American in the Senate and 10 in the House. I have been involved in political activism since my first year of college, but I have grown quite disillusioned with the American system because I've genuinely started to feel like I don't exist within it, except when it's convenient.

Any solution to this divide between Asian Americans and the political sphere would require a couple of things:

But more than that, there needs to be widespread recognition that the lived experiences of Asian Americans are different from those of other people of color and the ways in which we are marginalized — often depending on whether we are East or South Asian — differ as well. We have rich histories of political and social activism and have shown our support for various movements. It's time we honor that legacy and demand that American politicians work for us, too.