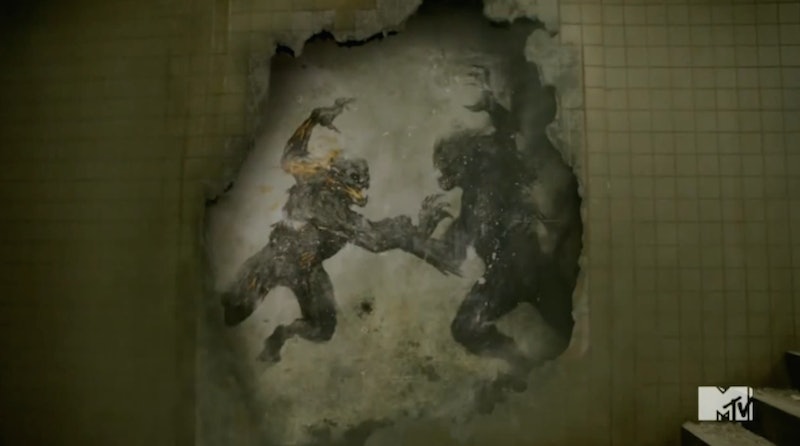 After 10 episodes of questions, theories, shocking moments, and general confusion and intrigue, we finally have some clues as to what the Dread Doctors are planning on Teen Wolf . At the end of the Season 5 summer finale on Monday night, we saw the Dread Doctors break down a wall to reveal a painting of two beasts fighting each other as the Doctors chanted the words "La Bete" and later, "success" (according to the subtitles on MTV). So what is "La Bete" and what does it mean for the Dread Doctors plan and Scott's pack?

We've actually heard the words La Bete before in Teen Wolf history. Back when Allison was learning about her Argent family history, she discovered a French tale of the La Bête du Gévaudan, which was basically a werewolf that terrorized the village of Gévaudan, tearing villagers' throats with their teeth. Allison was told that her ancestors killed one of the beasts after it killed more than 100 people. There's no way it's a coincidence that the Dread Doctors are now involved with the mythology of La Bete, because on Teen Wolf every connection, however frail, means something important. While I don't necessarily think that the Dread Doctors have been part of the show's mythology since Season 1, but I do think that La Bete will involve the Argents in some way. Perhaps one of the Doctors is connected to the Argents or is an ancient Argent.

But what's more pressing at the moment than the possible Dread Doctors and Argent connection is what the Doctors are attempting to do with La Bete. Jeff Davis explained to Entertainment Weekly that Season 5B would be all about resurrection as well as a "Clash of the Titans," after hinting that the fiery image on the left of the painting was a Hellhound and could be someone that we know. It seems very likely at this point that Parrish is the Hellhound on the wall, so does that mean the Dread Doctors are creating La Bete to clash with Parrish? They do say the word success at the end of the episode and we also hear some sheriff's deputies at the beginning of the episode talk about a massive bipedal animal running toward Beacon Hills High School.

When Deputy Valerie and Sheriff Stilinski get to the school, they see the broken sign inside, with the roof torn off. At first I thought that maybe the animal in question was the Desert Wolf looking for her daughter Malia, but after that Dread Doctors ending, and the fact that Theo has resurrected the fallen chimeras to create a pack, it seems likely the clash of beasts and titans has already begun. Scott's pack versus Theo's pack; Parrish versus La Bete; Supernatural versus Abominations. Teen Wolf Season 5B doesn't return until January, and with all of these conflicts brewing, the wait is going to be beyond painful.