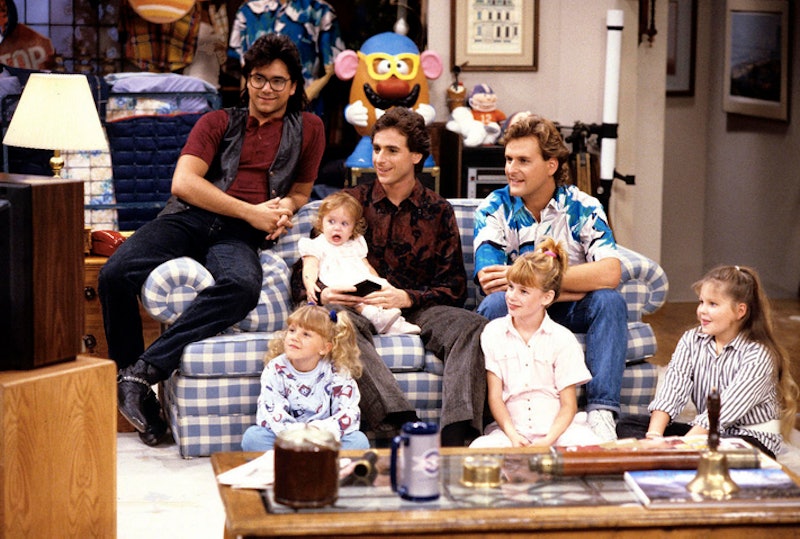 As a child of the '90s, watching Full House became a huge part of my weekly routine. I just couldn't wait for Friday to roll around so I could kick back and relax with my favorite San Francisco family. (TGIF, folks: live it, learn it, love it.) I mean, this show pretty much served as a mandatory rite of passage. Anyone who was anyone loved the Tanners, and those who didn't were immediately shunned from the cool kids lunch table. (Umm, what do you mean you don't think Michelle is adorable? YOU CAN'T SIT WITH US!) And even though it's been 20 years since the beloved sitcom delivered a new episode, I never tire of looking back at all the epic moments. However, there have been a few things that even I — a diehard fan — have forgotten about the Full House pilot.

You see, Full House set photos have been circulating like crazy now that production for the Netflix spin-off is officially underway, which has left me feeling all sorts of nostalgic these days. So I finally gave into my inner-child and sat down to rewatch the Full House pilot — an episode I haven't seen in well over a decade, at least. And, as it turns out, there are quite a few things I had completely forgotten about. Such as…

1. The Extended Intro Will Give You All The Feels

It's been so long since I've heard the song in its entirety — late night reruns usually just have the condensed version — and it made me surprisingly emotional. Just seeing the extra cutaways of the family off doing things together will fill you with all those gooey feelings this series was known for and then some.

Though we never actually see her, the Tanner matriarch played a huge role throughout the pilot and helped to set the premise for the entire plot. Of course, we eventually learn more about her in later episodes (courtesy of this heartbreaking home movie scene above), but even from the very first beginning, it was clear what a phenomenal woman she was and what a big void she'd left behind.

I'd forgotten that they'd both had their own rooms up until this point. But now that Uncle Jesse and Joey were moving in, the two were forced to bunk together, which led to some pretty hilarious hijinks. The sibling rivalry struggle is real, folks.

4. Michelle Doesn't Appear Until Halfway Through The Episode

In fact, if I wasn't already familiar with each and every family member, I would've thought that Danny only had two daughters. But when she did make her debut, it was obviously well worth the wait.

5. Danny Was Originally A Sportscaster, Not A Talk Show Host

Before there was Wake Up, San Francisco, Danny was busy reporting the latest news about sports-related topics. Anyone else having a hard time picturing this?

6. Jesse & Stephanie Were The Closer Duo

When I look back on the series, I always think about the special bond shared between Jesse and Michelle. But before that relationship has a chance to really to fruition, it's Jesse and Stephanie who steal the show as the series' cutest duo. Warning: massive amounts of adorableness will ensue.

We never see Kimmy's BFF, but when DJ decides to live in the garage instead of rooming with Steph, she mentions that Kimmy has her own phone line and her own bedroom even though she has three sisters. I remember Kimmy mentioning an older brother later on, but this whole three sisters thing threw me for a complete loop. Did she really have that many siblings or was DJ exaggerating just to try and win the argument? (If so, well played.)

Danny and cleaning have always gone hand-in-hand, however, in the pilot episode, Danny comes home from work to find a huge mess in his living room and yet he seems remarkably OK about it. I mean, he asked what happened, of course, but his demeanor was completely calm and lacked the usual freak out we're used to seeing from him when some serious cleaning needs to be done.

From Kermit the Frog to Pee Wee Herman, this guy established right off the bat that his comical impressions would be a staple to not only his particular character, but to the show as a whole. Cut. It. Out.

"Have mercy," according to the episode commentary, was a saying that John Stamos created for his character. Little did he know how much it would make us swoon.

11. Michelle Is Noticeably Older In Some Scenes

Full House creator Jeff Franklin explained in the commentary that this was because they had to go back and reshoot all of the scenes between Michelle and Danny once Bob Saget became available for the part. (He was Franklin's original choice and ended up replacing John Posey.) So given that six months had passed since the pilot was originally filmed, Michelle was bound to look significantly bigger.

But mostly, re-watching the pilot is just a wonderful way to spend an afternoon. Just sayin'.