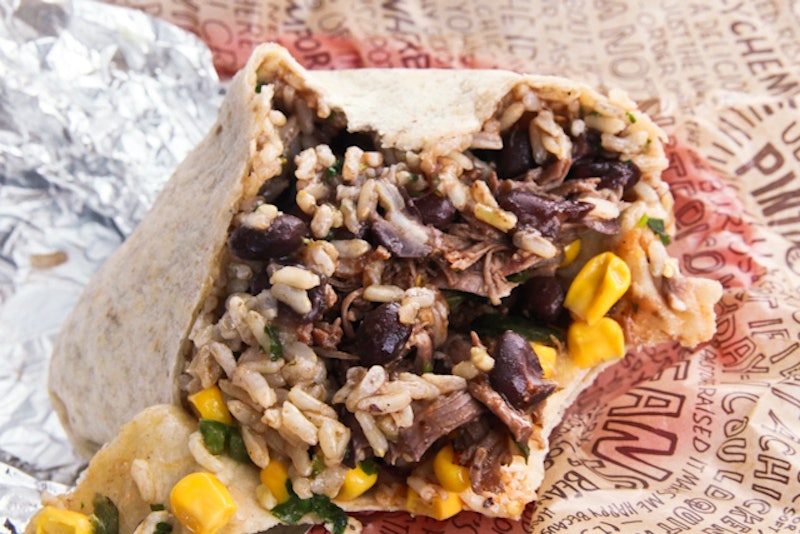 There is nothing like walking into Chipotle and getting yourself psyched up to devour a gigantic burrito that will keep you full for the next 24 hours. The cilantro rice, the flavorful meats, the guacamole … my stomach starts grumbling just thinking about it for more than three seconds. I always thought that a Chipotle burrito was a heck of a good deal, considering how much food they stuff in there. That is, until I discovered that I have been ordering my Chipotle fix completely wrong. That's right — there are ways you are messing up your Chipotle order without even realizing it.

I know, I know. My head was reeling when I found out, too. Just when you think you've got your favorite Chipotle order down to a science, a whole new bevy of burrito possibilities presents itself. Secret menu items, freebies, and other hacks are all here to change your life. And if you aren't using them to their full potential each and every time you order Chipotle? Well then you, my friend, are doing it wrong. From requesting a double-wrapped burrito (More tortilla for free? Yes please!) to requesting extra fillings (because more is always better), these tips are going to make you an expert Chipotle eater.

Next time you go into Chipotle, you are going to walk in there like a boss and dominate that burrito. Here are six ordering mistakes you're currently making, and how to fix them.

1. You Aren't Asking For Extra Everything

If you aren’t already asking for extra of everything you put in your burrito (except for meat and guacamole, which comes with an additional charge), you are doing something seriously wrong. Your burrito or burrito bowl is not living up to its full potential unless you are ordering more of the things you love ... for free. Want extra beans? Craving both pinto and black beans at the same time? Extra rice? It’s all free, so go ahead and order with reckless abandon. Want more veggies? Ask them to throw in some fajita vegetables after getting your beans and rice. As long as you’re ordering a protein, those vegetables are F-R-E-E. Then, proceed to load up on all the salsa your heart desires, because a boss like you doesn’t skimp on the good stuff.

2. You Aren't Asking For A Second Protein

Why limit yourself to only one protein when you can get two for the same price? Most people who run through the line at Chipotle have no idea that they could be ordering two types of protein at once for no extra charge. The next time they ask if you want chicken or beef, tell them you want half of both. I guarantee that you’ll get a smile and a nod of approval. That’s right, this is how you order meat at Chipotle.

3. You're Not Up To Speed On The Secret Menu Items

My mind almost exploded when I first heard about Chipotle's secret menu items, such as the quesarito (a heavenly quesadilla and burrito hybrid, in which a giant burrito is literally wrapped in a quesadilla). Are you running to Chipotle already? I have one foot out the door right now just thinking about it.

If that seems a little intense, go for the burritodilla — burrito filling sandwiched between heaping piles of cheese, grilled to gooey perfection. You have to order each of these at least once in your life. It’s another excuse to stuff gooey cheese in your mouth. How can you not try it?

Fresh ingredients are what Chipotle prides itself on, and you should take full advantage of this. Throw in some fresh cilantro or jalapeno the next time you order your burrito, bowl, or tacos. It’s completely free, and will liven up your meal with fresh flavor.

5. You're Not Double-Wrapping Your Burrito

Since you’re taking advantage of all the extras and freebies offered at Chipotle, you’ll probably need the double-wrap without even asking for it. If your burrito isn’t bursting at the seams, simply ask for them to double-wrap your burrito, and you’ll get another warm tortilla thrown in for no additional charge. Denying this perfectly warmed tortilla would be a crime. Not only would you miss out on the opportunity to fill your belly, you also risk the possibility of the dreaded torn burrito. No one wants the contents of their burrito dripping down their shirts and staining their pants. Not the way to be a boss.

6. You're Not Ordering A Burrito Bowl

The ultimate way to work the system at Chipotle is to order a bowl instead of a burrito or tacos. You may be grumbling about not having a tortilla, but here is where the genius comes in. When you order a bowl, you generally get more of everything, since they aren’t trying to smash it all into a tortilla. The tortilla and taco shells provide limited space to work with. So order the bowl to get larger portions, ask for all the extras, and finally, ask for a tortilla or taco shell on the side (yes, it’s completely free). Build your own perfect burrito or taco, and revel in gaming the system so well.