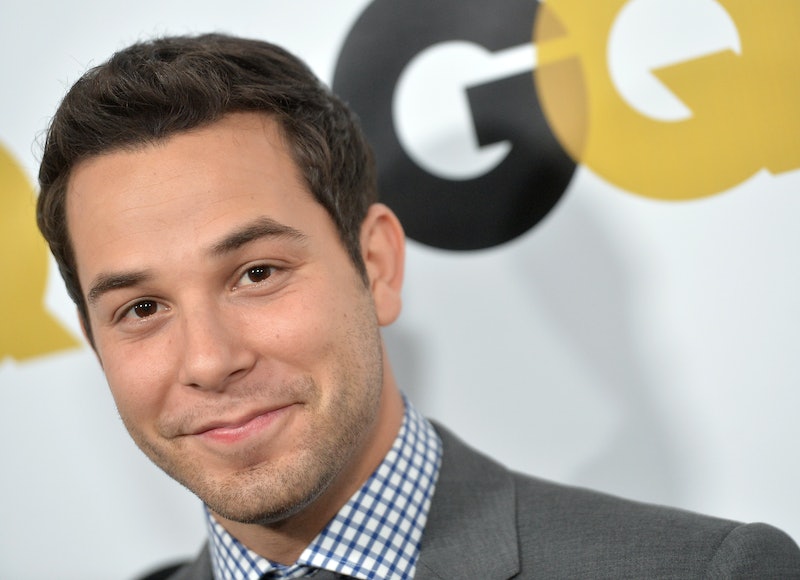 Aca-scuse me? The Glee-Pitch Perfect crossover we never asked for or wanted is happening and we've got all kinds of mixed feelings about. According to Darren Criss' latest Instagram selfie, Skylar Astin is headed to Glee this season. The Pitch Perfect star and vocal god posed with Criss and fellow Glee cast member Chord Overstreet in the aforementioned photo and as adorable as they all are and look, we just can't get behind merging the worlds of Barden University and William McKinley High School. We definitely support Astin teaming up with his former Spring Awakening co-stars Lea Michele and Jenna Ushkowitz because Glee could always use some new blood — but we absolutely do not want to see the rest of the Barden a capella teams on the show.

Lea Michele has apparently been tirelessly trying to recruit Astin to Glee for years. She told The Hollywood Reporter in 2012:

I wanted them to see him for Brody and for so many characters along the way but he just has to stop being a movie star and doing so many movies! I'm his biggest fan, he's one of my best friends, and I couldn't be happier for him and his success. He's amazing in Pitch Perfect. The minute I can get him on Glee, I want him on the show.

Imagine Astin and not Australian hottie Dean Geyer as male stripper and Rachel's first NYC love interest Brody? We can't — well, maybe a little because the two do look eerily similar but he's definitely not sexy enough to pull it off. We can only imagine what other characters from Glee's past Michele offered Astin up for but it looks like she's finally gotten her way with this one.

We can't say we're disappointed about Astin taking a turn on Glee. In past — cough, Jonathan Groff, cough — guest stars have been a welcome injection of freshness to Ryan Murphy's sometimes stale story lines. And we can't deny that Astin is adorable in a nerdy, boy next door way that definitely works for Glee. He's already got chemistry with the cast members (based on this selfie and from his Broadway days with Michele and Ushkowitz) and it'd be impossible for him to not be lovable and thus making us love the show. But just because it works for one character from the Pitch Perfect universe, doesn't mean it works for them all. Astin needs to be a one-time deal and that's it.

Pitch Perfect 2 may not be projected to start filming until next year but that absolutely, positively does not give a reason for Rebel Wilson, Anna Kendrick, Brittany Snow, Anna Camp or any of the other film's cast should consider guest-starring on Glee. Just don't even ask them, please. It would just be ridiculous and honestly, these two worlds do not mix —just because they starred in a musical movie doesn't make them fair game for Ryan Murphy. They wouldn't fit in, it wouldn't work, and we'd just feel embarrassed for them because their reputations would be distracting.

We're happy for Astin and excited to see what he'll do (as long as it's within reason and he's only on for a few episodes). Glee needs to spend some time on its actual cast members (mainly Santana because she rocks) and not on poaching other musically-inclined characters from the big screen. If Ryan Murphy and FOX need to tap into a similar source, they should see what the rest of the original Spring Awakening cast is up to since that's worked so well in the past. In conclusion, be happy with Skylar Astin, Glee, but don't bring on any other Pitch Perfect stars. Please. Also, here's that selfie: