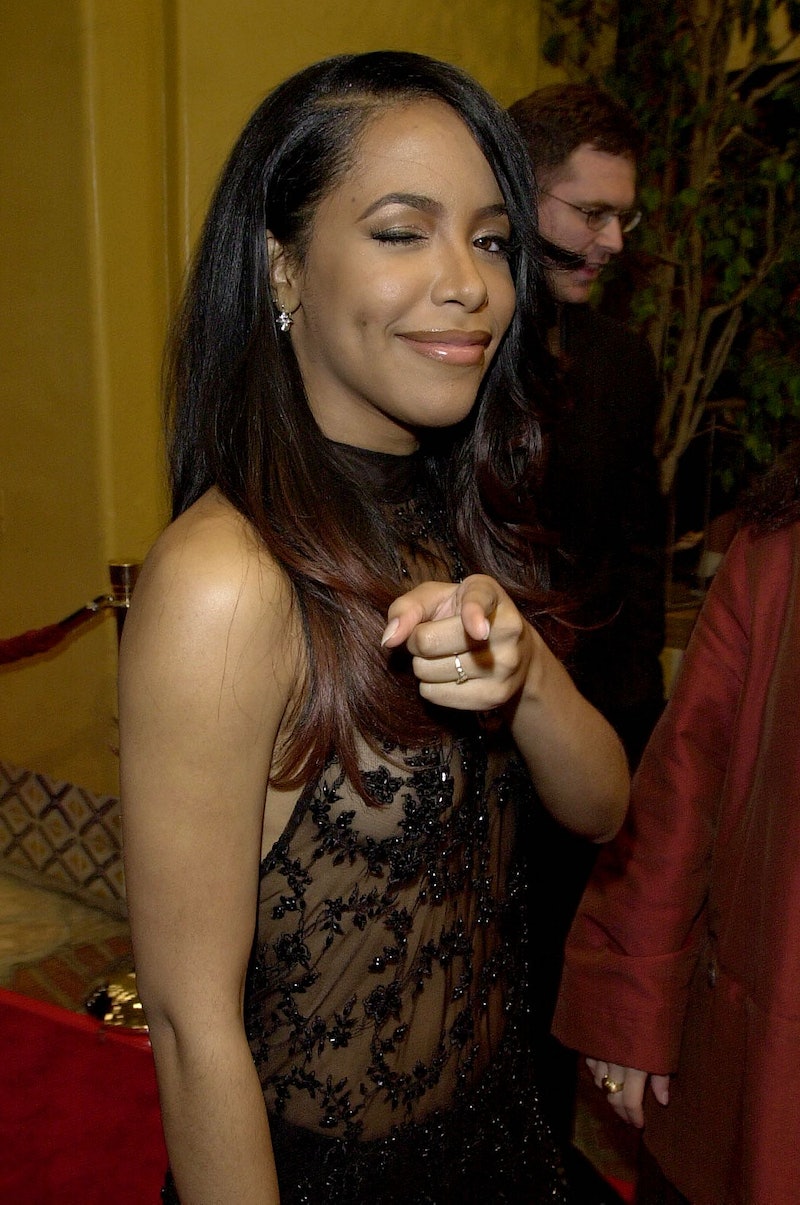 Aaliyah really was the Queen Of The Damned. It's been 14 years to the day since Aaliyah died in a tragic, fatal plane crash along with eight others: The megastar was only 22 years old when at the time. Her death was shocking and sobering, not only because of how senseless it seemed, but also because she was just on the cusp of her career. She was a queen of soul, and even though she left behind an abbreviated collection of songs, there's still an Aaliyah song for any and every mood you're in.

In her truncated but illustrious career, Aaliyah worked with every big name in hip-hop, rap and R&B: I'm talking giants like Missy Elliot, Jermaine Dupri, and especially Timbaland. She produced some of the most acclaimed and outright badass tracks of her time, and won over 30 awards — even though she only released three full-length albums from 1996 to her death in 2001. Most of sad albums, by the way, are still being heavily sampled by hip-hop and R&B artists now — like, by her fanboy Drake. This in mind, it's no surprise that Billboard called her a "muse that revolutionized R&B with her honey-coated voice," and that her influence is still so strong.

To celebrate Aaliyah's life and her legacy, here are Aaliyah songs to listen to no matter what mood you are in, 'cause she would want you to get in touch with your feelings:

For When You're Feeling Conflicted: "Are You That Somebody"

In other words, for when you're at a dramatic crossroads in a relationship. This song is perfect in every way, and so beloved that I bet you didn't know that the sample of the baby cooing was from a Prince song called "Delirious."

For When You're Feeling Frustrated: "We Need A Resolution"

In which Aaliyah will inspire you to demand answers. Communication is key.

For When You're Fed Up: "If Your Girl Only Knew"

One of the best girl power anthems of all time, with the iconic line "It ain't easy to get with me."

For When You're Feeling Sentimental: "One In A Million"

Aaliyah's softer side was soft: "One In A Million" is really a song for when you've got somebody you love through and through. Light a candle.

For When You're Feeling Defeated: "Try Again"

Put this song on, let Aaliyah's soothing voice wash over you, and remind you that if you fall down, don't blame yourself — you just gotta get back up. It's OK to cry when listening to this one, which Timbaland produced and released on the Romeo Must Die soundtrack.

For When You're Feelin' Yourself: "Rock The Boat"

The song so sexy, it got censored: Aaliyah's label delayed the release of "Rock The Boat" because its lyrics were too scandalous. Even now, 14 years later, the song is super sexy.

Rest in power, Aaliyah. Queens live forever with us.

More like this
Christina Aguilera Had A Mini "Lady Marmalade" Reunion With Mya At LA Pride
By Jake Viswanath
Alicia Silverstone Has Recreated An Iconic 'Clueless' Scene
By Frances Stewart
Jennifer Aniston Is Still Wearing That 'Friends' Dress She Stole From Monica's Closet
By Jake Viswanath
Photos Of The 'Elvis' Cast vs. Their IRL Counterparts Will Have You All Shook Up
By Grace Wehniainen
Get Even More From Bustle — Sign Up For The Newsletter