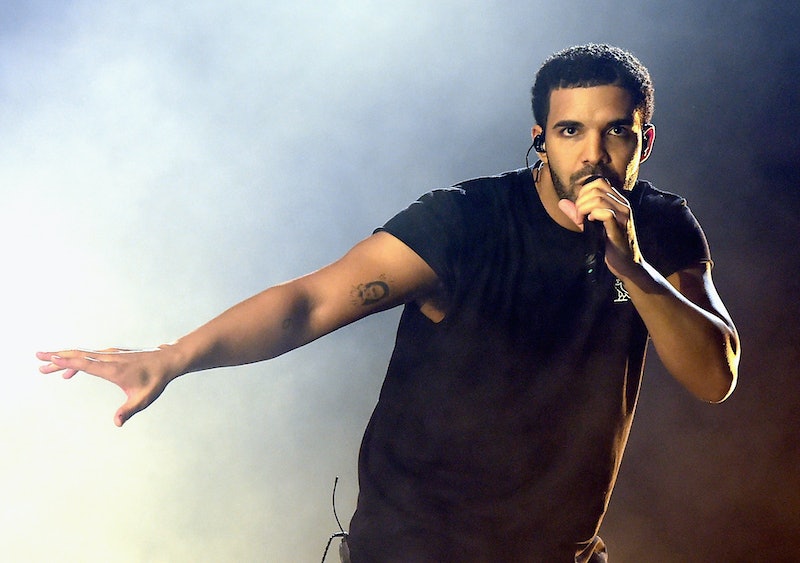 Ask anyone on the Internet, and they'll tell you that the most significant aspect of Drake's tattoos is that, if you read them in exactly the right way, they confirm his place in the Illuminati. Now, I'm not one to discredit all of the hard work that goes into those all-caps conspiracy theories littered throughout YouTube comments, but the rapper's many tats are actually way more kickass than the totally likely idea that he has some kind of connection to the Illuminati. Case in point? Drake's large collection of tattoos (we're talkin' 15) include an image of his father's mug shot, a large portrait of Aaliyah, and a permanent dedication to an emoji, which alone is better than anything the Illuminati could produce.

Though Drake has yet to mark his body with any ink honoring Degrassi or his OG persona, Jimmy Brooks (needless to say, these tats would obviously nab the top spots if he did), his tattoos are nothing to scoff at. Which is exactly why I couldn't help but rank them in order from weakest to most baller. Peep the definitive ranking of Drake's tattoos below, and then just try to convince yourself you don't want a picture of a Toronto landmark permanently inked on you, too.

Drake's songbird tattoo itself is actually pretty well done, but the reason this tat stands out in this list is because it also contains the phrase "XO20," which reportedly stands for his group of 20 friends, including the Weeknd. I'm the furthest thing from a bestie hater (shout out to ~*~my ladiez~*~), but the "XO" in the Weeknd's tagline allegedly refers to the drugs ecstasy and oxycontin, which is a little yikes-worthy to have on your skin for the rest of your life.

This one might make me an Illuminati conspirator. Dun dun dun.

Drake has five lines of quotes around his owl tattoo (more on that below) that read, "If I die today, it’ll be a holiday / atf / ovo / ymcmb / reps up" — a combination of Lil Wayne lyrics and the rapper's various projects. I'm diggin' the scripted font, but the random combination of letters and phrases is a little bit of a hot mess.

This is actually the rapper's second Toronto's CN Tower tattoo (the first he covered up with the eye tat). Nothing says "hometown pride" better than tatting the same landmark building twice.

One of the best things about Drizzy's collection of tattoos is how they honor the important people, places, and things in his life — and the "416" is a double whammy. It not only represents the Toronto area code, but many believe the way that the 4 is shaded to look like a 1 is yet another way that has Drake expressed his love for Aaliyah, whose birthday was January 16.

See, I really do love the fact that Drake loves his friends. That's why "All kinds" — an expression he uses with his buds — is ranked better than the "XO" controversy. Plus, the font just looks cool.

Drake's first-ever tattoo was the owl used to represent his company, October's Very Own. Shameless self-promotion, sure, but it's also something to be proud of. And we all know that an owl represents ~wisdom~.

7. "Everything Happens For A Reason Sweet Thing"

I could probably spend a solid 24 hours looking at quote tattoos on Pinterest, so I appreciate when they're well done, like this block of text. There's something to be said for a tattoo artist who can accurately ink a text-like font and Drizzy only got the best. Plus, I'm kind of into the whole "sweet thing" shtick. So Drake.

Drake has been outspoken about his love for Aaliyah, and he honored her in the most permanent of ways by getting her portrait inked on his back. That's dedication.

These family tats are all part of a series of portraits on the rapper's back. The fact that they actually look like the people they are supposed to represent (a difficult feat and an impressive accomplishment) is enough to put them high up on the list. But the real reason this series gets such high (low?) numbers is because it shows how family-oriented the "Best I Ever Had" rapper is and how much he respects and honors those who shaped his life. Aw.

Because there is literally nothing more badass than having your dad's mug shot permanently etched into your skin.

While some haters (read: the people who actually created the emoji) believe that this emoticon actually represents a high five, Drake interpreted it — as we all did — as two hands clasped in prayer. Since the ~prayer stance~ is kinda his thing, it only makes sense that the rapper has this emoji permanently inked on his skin. (The full tat — combined with the "6" next to it — most likely represents his track, "6 God".) Of course, the fact it's none other than a freaking emoji earns it all of the awards, and the numero uno spot on this list. Prayer hands emoji 4 lyfe, yo.