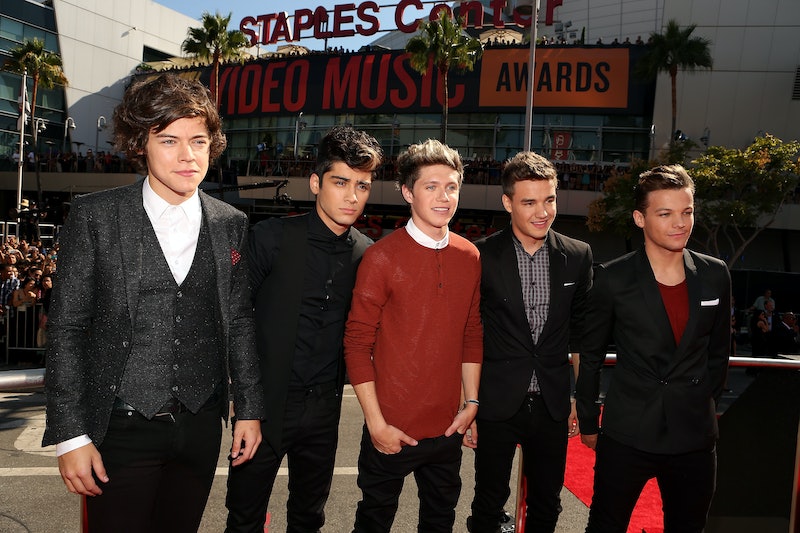 Considering the upcoming 2015 VMA Awards will mark One Direction's first VMAs as a foursome, it seems kind of appropriate to revisit their first-ever VMAs appearance ever. And given all the 1D hiatus speculation, there's a chance this year might just be the last time we see them on the MTV stage. Grab some tissues and cue the reminiscing.

Love 'em or hate 'em, you have to admit — One Direction has seriously amazing style. So it's no surprise that their VMA debut back in 2012 was actually pretty darn stylish and not at all embarassing. Celebs always seem to have downright cringeworthy red carpet appearances from back in their early days, but 1D knew how to work a red carpet from the very start. Proud fan girl over here.

Though their clothing was that standard One Direction polished-British-gent-meets-cool-guy-edgy look: black and gray suits, pocket squares, a henley and some plaid, their hair definitely warrants some talking about. Some things have definitely changed since 2012 in the hair department.

While Liam and Louis haven't deviated too drastically from their early styles, Harry and Niall (and, well, Zayn), have definitely had some hair evolution. I mean, I'm kind of just wondering if Harry's had a haircut at all since then?

Though Louis's current hairstyle is slightly tousled and a bit longer, it's still generally the same style as it was back in 2012. He was just, you know, a little more slick back then.

Liam's hair is, like, literally the same. But if it ain't broke, don't fix it!

We need to take a moment to remember Zayn, who was rocking some kind of blonde skunk stripe in his hair.

IT WAS COOL AT THE TIME, OK?

Niall's color was looking different as well, with darker roots and a bit less blonde. Which brings us to Harry Styles and his covetable curls.

Though it was still long, Harry's hair was nowhere near as long as it is now. I mean, there was no chance of a man bun back in the day. Plus, he's got that styled swoop going on. Now he just kind of lets it all hang out there.

But like, all good things are wild and free.

More like this
The Secret To Taylor Swift’s Fringe, According To The Experts
By Orla Pentelow
The $6 Drugstore Beauty Product Taraji P. Henson Uses Every Single Day
By Danielle Sinay
The Best Beauty Looks From The 2022 BET Awards
By Audrey Noble
Why Sarah Jessica Parker Wanted Fans To Stop Calling Her Hair Choice “Brave”
By Brad Witter
Get Even More From Bustle — Sign Up For The Newsletter