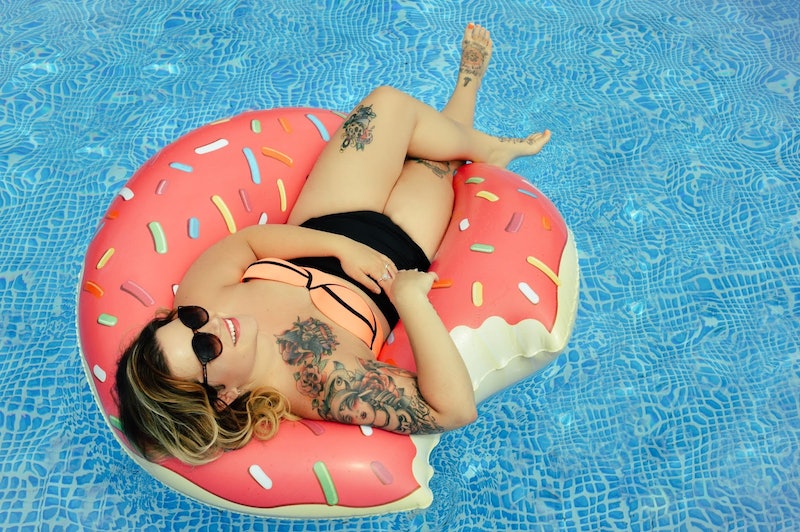 On Aug. 12, Canadian plus size blogger Stina Scott of the blog Fatshion Peepshow released a truly epic list of body positive bikini babes. And when I say epic, I mean it features 101 women in all of their bikini body glory. Scott first started her blog in June 2013, but it wasn't until the summer of 2014 that she came up with the idea of putting together a post of this magnitude. With summer quickly coming to an end, it's almost time to trade in bikinis and sandals for the parkas and snow boots and brace ourselves for winter weather, of course. But that is not before celebrating bikini bodies of all shapes and sizes one last time.

"The whole body positive movement is incredibly empowering and it helped me find so much beauty in myself," Scott tells me via e-mail. "It was while browsing and discovering the fatkini movement that I came up with the idea of gathering every amazing, beautiful, and empowering babe in a bikini or fatkini together in one place for a supercharged power of inspiration. 101 seemed like it would be an unreachable number to obtain so that's the number of submissions I requested, I really wanted to push myself to the limit."

When Scott finished her 2014 list, not only had she reached her goal of 101, but the post also received 4,000 page views in the first week and landed her an interview on Mic.com. When it came time to put together the post again this year, she already had a head start on submissions thanks to the success of her past work.

"I received tons of comments and private messages from women wanting to be a part of the 2015 project and many of them shared with me how the post had inspired them or helped change how they felt about wearing a two piece," says Scott. "There are actually a few girls in the 2015 post that had never worn a bikini until they read about my blog project and wanted to participate."

To collect all of the photos, Scott designed a flyer and started posting it all over Facebook and Instagram. It took her a little over six weeks to gather all of the photos along with the social media information and quotes she collected from each participant. Unlike some of the other bikini roundups that I have seen on the Internet, Scott took submissions that spanned all ages, genders, and sizes.

"Any person that wears a bikini can be a part of the project; age, size, and gender make no difference to me," Scott tells me. "The only requirement was they had to be wearing a bikini. This year I didn't end up with any men, though I did have a male friend inquire and try to get photos to me, but it just didn't work out. I hope next year you will see even more diversity in age and gender."

The 2015 list was released on Scott's blog on Aug. 12 and the impact was arguably greater than last year's. Scott says the post hit 10,000 views in the first three days. Although she can't gauge its full reach just yet, she says she saw many of the participants sharing the post on their social media accounts.

The list features a range of known plus size bloggers and models alongside everyday women rocking bikinis in flawless harmony. Accompanying each photo is a quote from the participant about how wearing the suit made them feel. The words alone are truly inspiring and resonated with me as a person of size who's struggled to feel free and empowered while wearing a bikini.

I really loved reading all of the participant's stories, but this quote from Phylicia was probably my favorite. She wrote:

"Last year was my first time wearing a bikini.. .I use to be ashamed of my body and thought an oversized T-shirt was a must with your swimsuit... So glad I'm not that stupid girl anymore. Surrounding myself with beautiful confident females; I've learned to love every muffin and roll in my bakery... This suit made me realize I've been rocking an invisible crown all along."

Scott had a similar reaction when compiling all of the quotes.

"Of course I fell in love with all of the quotes and the ladies involved, but there were a few that stuck out and struck a cord with me,' she says. "The first one that stands out is the photo of Ray Lyn and her child on the beach. Her quote is, 'You give me courage because I was always told you were no more than an impossible notion because of my size, I will never be ashamed of my body again, this fat body that made you.' As a mother of four, I can totally relate to Ray Lyn's quote. I will forever be amazed and thankful for the beautiful children my fat body created."

The quotes along with the images highlight just how different everyone's individual self love journeys are. While some participants discussed their supportive families, others shared how they were shamed for their appearance by their relatives. Hearing this range of histories — especially to the tune of 101 voices all sharing their experiences — is hugely important.

"We are all on a journey of self-acceptance and body love, some of us are further along in their journey than others are," says Scott. "If my readers are able to make a connection with any of these fierce bikini babes, or even find something beautiful within themselves where they once found a flaw, that would be amazing."

This visibility isn't just crucial for fellow women of size. I have to believe continued visibility of fat bodies will help change the hearts and minds of those who hate people of size just for existing as well. In a society that would still prefer plus size women remain invisible, a post of this magnitude that shows women of all sizes not just accepting themselves but celebrating themselves is a powerful move.