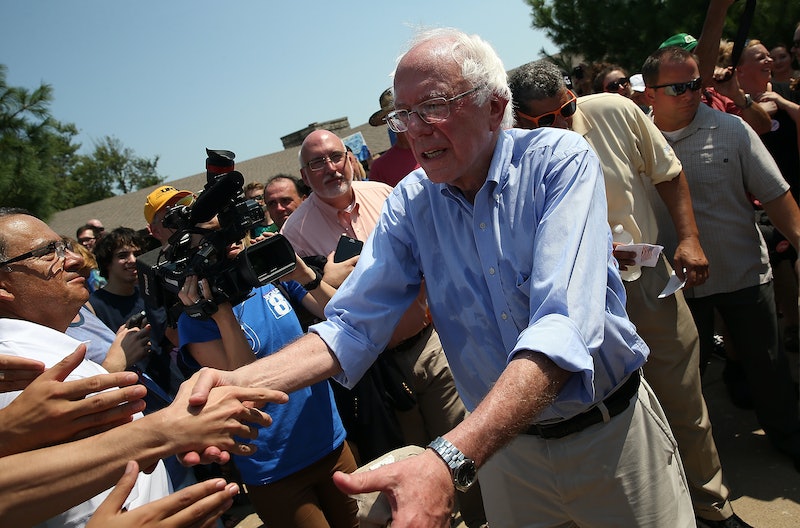 More than a year out from the election proper, Democratic presidential candidate and Vermont Sen. Bernie Sanders is raking in millions in small-scale donations — more than any other candidate in the 2016 contest thus far. Sanders, who appears on pace to beat out even Barack Obama’s significant haul from small-time donors in the 2008 campaign, is bucking the trend in an election that has already seen a wealthy few pour in millions of dollars of campaign contributions to their preferred candidates through unregulated super PACs.

Unlike in elections past, where candidates have kept super PACs to the side of their campaign strategies, the political organizations have moved to center stage in 2016. They've used their unlimited contributions to save faltering campaigns, like those of Texas Gov. Rick Perry, or to build up ground game teams in key states, like that of Louisiana Gov. Bobby Jindal. Yet Sanders refused to work with a super PAC, preferring instead to draw from middle-class supporters to keep his operation going. If he wins the Democratic nomination, or proves to be a serious contender against the fundraising machine that his opponent, Hillary Clinton, can mobilize, Sanders will have made a strong point about looking to the country’s grassroots rather than its hedge fund managers for campaign cash.

According to FEC filings from July 31, Sanders brought in more than $13.5 million since May, of which $10.5 million came from donations under $200. That is significantly more than either Clinton or any of the contenders for the Republican nomination have drawn from the American public thus far. In 2008, almost a quarter of Obama’s campaign war chest came from small-scale donors, according to the Campaign Finance Institute. Sanders looks to beat him if he keeps fundraising at this pace.

And as Sanders’ campaign staff told The New York Times, the Vermont populist has far exceeded those fundraising metrics in the months since the July 1 filing date for FEC reports. “The fund-raising from our standpoint is going phenomenally,” campaign manager Jeff Weaver told The Times. “We’re way ahead of where we thought we would be.”

Sanders’ money is coming not from high-rolling fundraising dinners or huge checks from Wall Street. In fact, he has only had five fundraising events so far, all of which resembled rallies and had buy-ins of around $100.

Instead, Sanders is raising his campaign cash by asking the tens of thousands of Americans who have turned out to his rallies to give what they can. His average contribution, according to the campaign, is $31.30.

So far, out of crowded field, Sanders ranks fifth in the amount of cash raised — quite an achievement, given that none of his donors can offer him more than the $2,700 contribution cap. One woman, Donna Mae Litowitz, sent the campaign a check for $10,000 to support Sanders, but his staff returned $7,300 of it.

In comparison, Clinton has raised a significant amount of cash on her own — $47.5 million, according to the July 31 FEC filings — but she also is closely affiliated with two Democratic super PACs, Priorities USA and Correct the Record, which have raked in $20.3 million.

The Vermont senator acknowledges that running a campaign without the help of a super PAC, which can accept unlimited donations, is an uphill battle.

“We will be greatly outspent, yes, but we will raise enough money to wage a winning campaign,” Sanders told The Times.

A Vermont legislator and supporter, Chris Pearson, wanted to set up a super PAC in Sanders’ name. But Sanders refused, saying that he didn’t want to be tied to “the millionaires and billionaires."

Instead, the campaign is taking a play out of the middle-class playbook. “When you know you’re not going to raise as much as your opponent, you have to make every dollar count,” Weaver said.

So far, the Sanders’ campaign has only spent about $3 million of its haul, most of it on digital consulting and advertising. The Clinton shop, on the other hand, laid out $18.7 million over the same period, much of it on catering at events and media productions.

Sanders’ fundraising successes from the middle class and small-scale donors stand in sharp relief to the super-PAC-oriented strategies that his competitors are relying upon. (The notable exception here, of course, is ostensibly Donald Trump, who touts that he can fund his own campaign, to the tune of millions, from his vast personal wealth.)

As a number of political strategists noted to The Post, 2016 could well be the election of the super PAC. Let loose by the Supreme Court in its 2010 decisions to treat corporate money as protected free speech, these political organizations can solicit unlimited amounts of money to support candidates in the primary and general election, provided that the candidate does not solicit the funds themselves, and that the candidate doesn’t share “insider” information with the PAC. In 2012, most candidates kept their distance from the super PACs set up in their names. But this cycle, the strategy has shifted to using super PACs almost as virtual extensions of the campaigns themselves.

“It really is a charade that we have any semblance of campaign finance limits,” Miles Rapoport told The Post. Rapoport is the president of Common Cause, an advocacy group that seeks to get money out of politics. “What we’re seeing is a wealth primary to the tenth degree, where what candidates are doing is chasing a very small number of people who can make or break their candidacies from day one.”

Former Florida Gov. Jeb Bush kicked off the super PAC frenzy when he appeared at a number of high-scale fundraisers for PACs set up in his name before declaring his candidacy. Through August 1, Bush had raised $11.4 million for his campaign committee. In turn, the PACs affiliated with him had $98.2 million in cash on hand, and had already spent $10.3 million in support of his candidacy, making him the most successful contender thus far in the election’s money race.

Other GOP candidates who have seen super PACs raise tremendous sums to keep them in the 2016 primary are Sen. Ted Cruz, Sen. Marco Rubio, and Gov. Scott Walker. Nearly three-fourths of Cruz’s $52.5 million is in the hands of super PACs. The Washington Post reported that more than 95 percent of that haul came from checks of $1 million or more. Walker, in turn, is not required to report his campaign fundraising numbers until October because of when he officially declared his candidacy, but so far, super PACs have pulled in more than $26 million to support him.

Last cycle, super PACs often channeled large-scale checks from wealthy donors, like the Koch Brothers or private equity managers, into television ads and other forms of campaign literature. But so far, a number of super PACs have pursued more unorthodox strategies for supporting their preferred candidates, from writing checks to pay campaign staff members (in the case of Perry’s struggling bid) to hosting town halls in Iowa at which candidates appear as special guests (Jindal) to building the grassroots game on the ground (former Hewlett-Packard executive Carly Fiorina).

The FEC has shown itself largely resistant to the idea of intervening to crack down on PAC use, or to curtail activities that might be seen as undue (and illegal) degrees of coordination between the political organizations and the campaigns themselves. Larry Norton, a former general counsel at the FEC, told The Post that candidates looked likely to continue to push the boundaries if the commission or Congress did little to crack down on their activities.

“I think the tolerance for risk is going up the more that the law seems to not make much sense and there doesn’t seem to be aggressive enforcement,” Norton said to The Post. “There are clearly some roles for campaign committees, but I think their role is likely to become more and more diminished over time.”

Through largely unregulated super PACs, millionaires and billionaires have been able to keep candidates afloat in the electoral process that otherwise might have had to drop out from a lack of funds and grassroots support — a phenomenon that both prolongs the primary process and demonstrates how clearly the power of money is distorting the election cycle.

Nick Penniman is the executive director of Issue One, which seeks to reduce the impact of big money on politics. As he told The Post:

A single donor can float an otherwise unviable candidate for the length of the primary.

Which isn’t a bad thing per se, says conservative activist David Keating. Keating brought the 2010 case SpeechNow.org vs. FEC, which led to the creation of super PACs.

“[Without super PACs], probably a lot of these candidates wouldn’t be running, and if they were, they wouldn’t be taken seriously,” Keating told The Washington Post. “More choice for voters is better.”

But that undue influence of the wealthy elite in politics is what Sanders is determined to change, and taking millionaire money in hopes of winning the White House in order to make that change is not part of the bargain.

“[By not using super PACs,] we’re giving up millions and millions of dollars, no doubt,” Sanders told The New York Times, “but we will sink or swim based on what we get from the middle class of the country.”

More like this
Which Cast Member of 'Westworld' Season 4 Has the Highest Net Worth?
By Meg Walters
Where Is Clayton Echard Now? The Former 'Bachelor' Star Is Dating Susie Evans
By Kadin Burnett
10 Must-Read New Books Out This Week
By K.W. Colyard
What's New On Netflix: A Third '365 Days' Movie & Lili Reinhart’s New Film
By Arya Roshanian
Get Even More From Bustle — Sign Up For The Newsletter