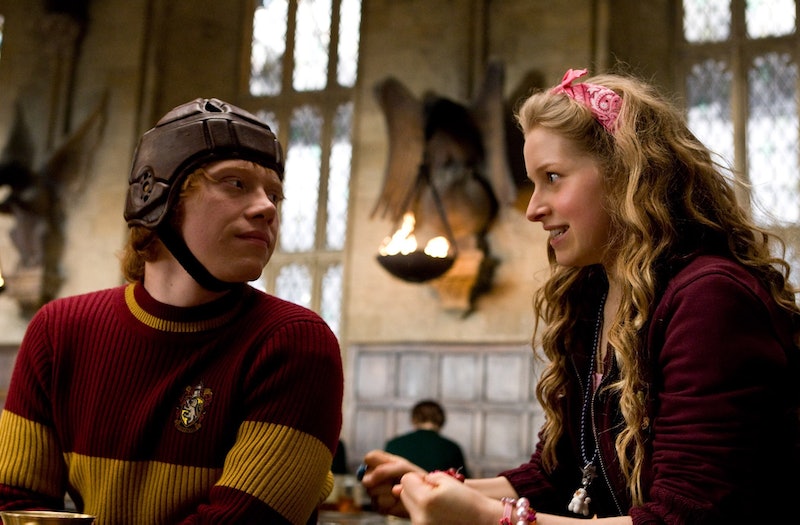 From Albus Dumbledore and his boss Zefron poster, to Draco Malfoy and Ron Weasley both falling in love with Hermione Granger, romance abounds in Harry Potter. Oh, wait, am I confusing AVPM with the actual series? Time to reread, I guess…

Still, there are so many great couples in Harry Potter. And some pretty terrible ones. Because even amidst the struggle between good and evil, romance still abounds. Though no one can really beat the love between Dumbledore and his socks, or perhaps the love between Gilderoy Lockhart and Gilderoy Lockhart (even a memory charm couldn’t erase how much he loved himself), every Harry Potter fan has an opinion on who should be No. 1. Because who doesn’t love arguing over which HP couples are the worst, and which are the best?

I’m talking canon here, because as stated before, Dumbledore & the Zefron poster would just steal the show in any other case. But from Harry Potter and the Sorcerer’s Stone to Deathly Hallows and even beyond (thanks to Rowling’s reveals on Pottermore), from short-lived flings to happily-ever-after romances, there are plenty of ships to choose from when selecting the Ultimate HP Couple… and the Ultimate Fail of an HP Couple.

Since the union of Tom Riddle and Merope Gaunt produced Voldemort, they automatically win Worst Couple Award. However, the couple was doomed from the start: Merope tried to enchant Riddle so he would fall in love with her and she could escape her dismal living conditions, which didn't work out so well, and everyone ended up miserable.

Petunia Dursley had so much more to her than a long neck and a penchant for spying on the neighbors. She housed Harry all those years, and it turned out that all she really wanted was to attend Hogwarts. Isn't that what we ALL want? But to dull the pain of her rejection, she married the least magical person possible: Vernon Dursley. I can't help but think that Petunia could've been kind of awesome if she had overcome her jealousy of Lily, embraced her sister's culture, and ended up putting her spying skills to use as a reporter for the Daily Prophet.

These two were both pretty nasty, though Narcissa ultimately proved how a mother's love can overcome pretty much everything when she lied and said that Harry was dead in order to save her son. Maybe she could have done better without Lucius, then again, without their son Draco we wouldn't have Tom Felton in the movies, so thank you Lucius and Narcissa for that.

Cho was all over the place, which was understandable, but it made her relationship with Harry painfully awkward. Harry had trouble understanding her behavior (Hermione constantly had to explain everything Cho did), and Cho spent their whole first kiss crying. However, the final straw for this couple was when Cho tried to defend her traitor best friend, Marietta, who betrayed the D.A. Harry "always has to be a hero" Potter obviously wasn't going to stand for THAT nonsense.

J.K. Rowling has stated that Neville ended up marrying Hannah Abbott, who became the landlady at The Leaky Cauldron. Maybe that's the way it was planned out, but obviously Neville and Luna should have ended up together, am I RIGHT? Even Rowling has said that she felt "a bit of a pull" between the characters.

...But Luna ended up with Rolf Scamander. Which is kind of cool, since Rolf is the grandson of Newt Scamander, but still. Neville and Luna FTW.

I love George Weasley. I love Angelina Johnson. But this whole relationship was just a reminder that Fred was gone. *crying a thousand tears*

These two really weren't meant to be together — Dean tried desperately to save the relationship, while Ginny grew increasingly annoyed with his clinginess — but in the end, Dean was a really good guy. He didn't hold a grudge against Harry and Ginny after they got together, beyond his initial annoyance. Plus, the relationship helped Harry realize how he felt about Ginny, so it was good in that regard, right?

Lupin tried to resist a relationship with Tonks for her own safety, but she won him over in the end. Sadly, the timing didn't work out for this couple, and they spent more time apart and miserable than they got to spend together and happy.

James and Lily were a flawed yet awesome couple. Though James was immature and reckless as a young man, Lily inspired him to become a better person. Lily also gave her life to save their son, which protected Harry for years after she was gone. The only shadow over this seemingly golden couple is Severus Snape. He was unable to overcome his prejudice against non-pure-bloods and his attraction to dark magic, but he never stopped loving Lily Evans, and that kind of love despite the odds is something I can't help rooting for.

At first, it seemed that Fleur was annoying and shallow, and not worthy of a Weasley. She didn't really fit in with the Weasley women (Ginny called her "Phlegm"), but after Bill was attacked by Fenrir Greyback, Fleur showed her true colors: she indignantly stated that she was good-looking enough for the both of them, and that Bill's scars showed his bravery. Props to this power couple.

Viktor Krum is an underappreciated GEM. Though he comes from a school known for dark magic and death eaters, he doesn't pursue either path. Hermione sees this, and values Krum for his character — not his celebrity. She recognizes that he has character, despite the stereotype of Durmstrang students. Krum also appreciates Hermione for her character and recognizes how smart and awesome she is, ignoring all the other girls throwing themselves at him. Plus, during the Triwizard Tournament, she's the person he would miss most, and he tells her he's never felt the way he feels for her for any other girl. And how happy are they during the first half of the Yule Ball? So. Adorable.

You knew this was coming from the moment Ginny fell for Harry, though it took him a while to catch on. Once Ginny relaxed around Harry and he saw her fiery, independent, strong-willed personality, he knew she was the one. I only wish the movie would have kept their story as it was in the book, with Harry kissing Ginny in front of everyone in the Gryffindor common room. Don't even pretend you didn't reread that scene like 700 times!! Ron is (for the most part) cool with the couple, Ginny tells people Harry has a tattoo of a Hungarian Horntail on his chest, and Book Ginny/Harry are an all-star Quidditch-dominating, dark-lord fighting power couple.

Sorry to all the Harry/Hermione shippers, but Ron and Hermione were meant to be from the moment they met on the Hogwarts Express. Ron was always in someone's shadow, but in spite of that, he: sacrificed himself in a chess game, tried to curse Draco for insulting Hermione, fiercely appreciated her intelligence and bravery (he even came around about S.P.E.W.), and always tried to protect her whenever he could (going back all the way to their first year). Hermione, on her part, always saw the good in Ron, even when he thought he was overshadowed by everyone else — plus she always went to the Burrow a little earlier than Harry, so it's obvious that she and Ron just really liked being around one another.

Arthur and Molly are the ultimate couple. They have an awesome family, and even though they bicker, they try to support one another however they can, even when times are tough. They know that money isn't the key to happiness, instead holding relationships and quality time over wealth and status. The Weasleys loved each other fiercely, accepting one another's quirks, and that's why they are simply the best.