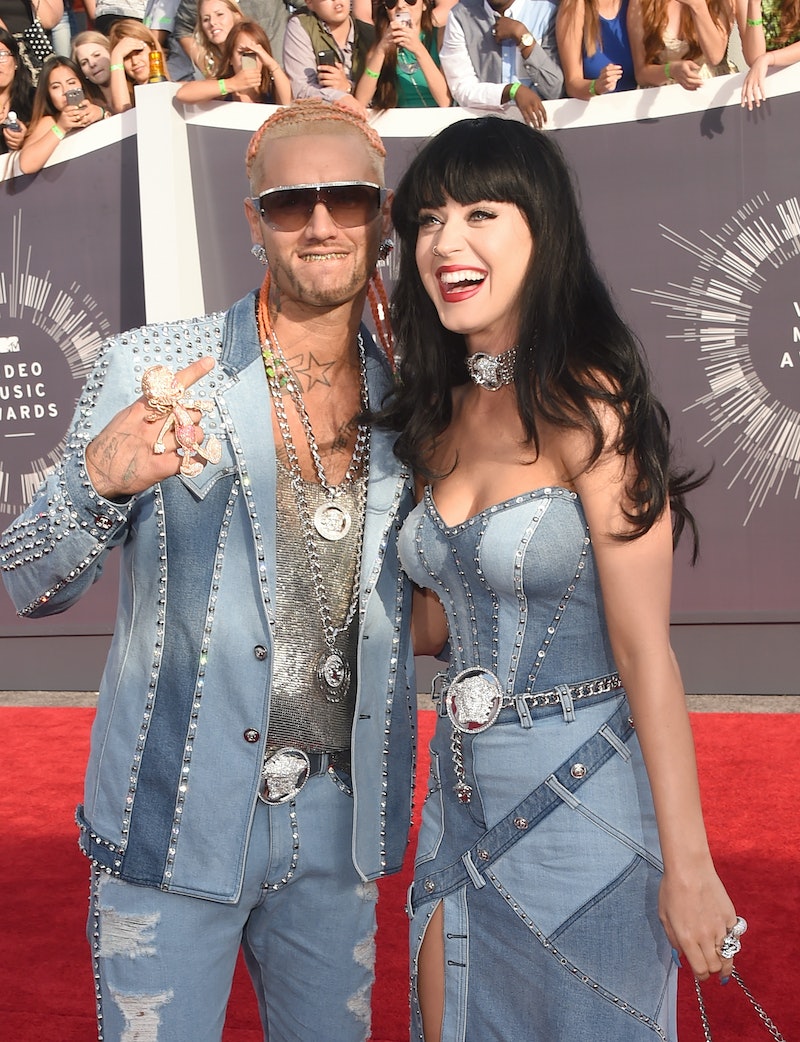 There have been many memorable moments from the MTV Video Music Awards. At the top of the list, I'd have to say is the incident between Kanye West and Taylor Swift in 2009. Second to that, however, I'd argue that Katy Perry and Riff Raff's 2014 VMA outfits is close behind. Much more positive than the former incident, Perry and Riff Raff's matching denim outfit was definitely a tribute to the '90s (dirty) pop power couple Britney Spears and Justin Timberlake.

If you look closely there are many more pieces of evidence, other than the fact that their outfits were all denim, that made it quite apparent Perry and Riff Raff were paying their respects. Perry's dress had all the key distinct features of Spears' dress. Let's hone in on the deets, shall we? Both dresses had a sweetheart cut and were made with a mix of light and dark-washed denim. Both Perry and Spears accessorized their outfits with a small, rounded handbag, Western-esque belt, and sparkly choker.

Similarly, Riff Raff's two-piece denim suit had the same collar cut and chevron-shaped design on the chest pocket that Timberlake's two-piece had. Although Riff Raff wasn't wearing a denim cowboy hat like Timberlake did, he wore a similarly shaped pair of sunglasses as Timberlake's. As the cherry on top, Perry and Riff Raff were smiling and posing as if they were dating to take it back to the Justney days.

Although the whole matchy-matchy look was just a publicity stunt, nothing could take away from the fact that Perry's look was on-point. The Fireworks singer even got props from Spears herself via Twitter.

Ugh, I'm feeling all the feels!

For the 2015 VMA, I'm wondering if Perry will wear another throwback outfit.