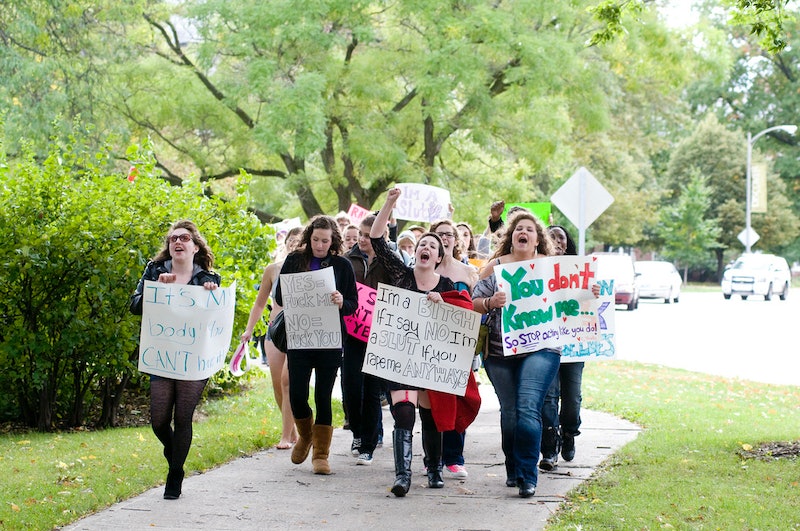 For every five women living in the United States that read this article, odds are that one has been or will be sexually assaulted at some point in her life. This statistic pretty much guarantees that every reader (you included) knows someone who has been sexually assaulted — probably multiple someones, in fact. It’s a horrible truth, one that makes optimism very difficult, but we don’t have to resign ourselves to rape culture; it is possible to fight it.

In Asking for It: The Alarming Rise of Rape Culture — and What We Can Do About It, Kate Harding examines what rape culture is and how our society continues to perpetuate it. Women certainly aren’t the only victims of rape, nor are men the only perpetrators of the crime, but Harding elected to focus on our half of the population because “we are the primary targets of the messages and myths that sustain rape culture.” In highlighting the ways almost all of us contribute to toxic norms and beliefs, she also arms us to work toward solutions.

Harding skillfully breaks down the factors that have converged to create the United States’ rape culture. Asking For It mixes statistics and research with true stories that show our flawed collective attitude toward sexual assault, resulting in a book that will leave you both outraged and inspired to make change happen.

Here are eight ways we can work against rape culture, based on Asking for It, because we shouldn’t settle for such an unfair reality:

Revisit Your Definition Of Rape

We should never downplay the severity of rape depending on the circumstances. Whether the victim knew her rapist, was drunk, fought “hard enough,” etc., doesn’t matter. Harding says it well: “There aren’t different categories like rape-rape, sort-of rape, gray rape, real rape, and not-really rape. If a person was forced to have sex against their will, it was rape.”

Reevaluate How You Talk About Women

When we call women "sluts," "whores," and the like, we villainize them in a way that maintains the idea that a woman’s behavior or appearance can indicate that “she was asking for it” or “she deserved it.” Again, rape is about a lack of consent, so slut shaming takes away from that fact.

Understand That Sexuality Is Up To Individuals

How others choose to express their sexuality isn’t something we should judge. Harding argues that when we prize purity and chastise displays of sexuality, we imply that women who are act flirtatiously, wear revealing clothing, or are sexually active can’t truly be victims. When we do this, we open the door for victim blaming. At the risk of being redundant, I’ll again highlight how Harding defines rape: “the violation of another person’s autonomy, the use of another person’s body against their wishes.” That means the rapist is always at fault, not the victim.

Put Yourself In A Victim’s Shoes

When someone is raped, there should never be a discussion of “Well, it wouldn’t have happened if…” No one deserves to have their choice taken away, even if they exercised poor judgment. It’s important to remember this and put yourself in victims’ shoes. I’d be shocked if anyone reading this could honestly say they’d never made choices that put them in a potentially dangerous situation. If you were lucky enough that nothing bad happened, I’m glad for you; just keep in mind that not everyone is so fortunate.

Consider How You View Those Accused Of Rape

When you hear about a rape, analyze your thought process. If you’re immediately looking to give the accused the benefit of the doubt and placing blame on the accuser, check yourself. For no other crime do we do this, and we absolutely shouldn’t for rape. Statistics show that somewhere between 92 to 98 percent of those who report rapes were truly assaulted, so it’s the victims we should be more inclined to believe.

If You Raise Children, Teach Them Well

Work to fight rape culture yourself and pass the lessons along. Raising kids who understand the importance of consent, avoiding victim blaming, and so on can make a huge impact. As Harding points out, girls are often taught how to try to protect themselves while not enough focus is given to teaching boys not to rape.

Across all different forms of media, rape culture can be seen and heard. Be aware of its presence, and when possible, try not to support those who glorify it. Harding names songs like “Blurred Lines” by Robin Thicke and the movie Crank as examples.

When you hear others perpetuating rape culture, try to find the courage to take a stand. Explain why specific behaviors are harmful and try to engage in meaningful discussions about how harmful our society’s view on the issue can be. It’s not always easy, but it’s for our loved ones, ourselves, and the hope that we can change the one in five statistic.

More like this
16 Novels That Paint A Realistic Portrait Of Abortion
By K.W. Colyard
Aesop's Queer Library Is Open
By Tomi Otekunrin
How Getting An Abortion Has Changed From The ’60s Through Today
By Amanda Chatel
Why You're Seeing Green Bandanas At Abortion Rights Protests
By Lexi Inks
Get Even More From Bustle — Sign Up For The Newsletter