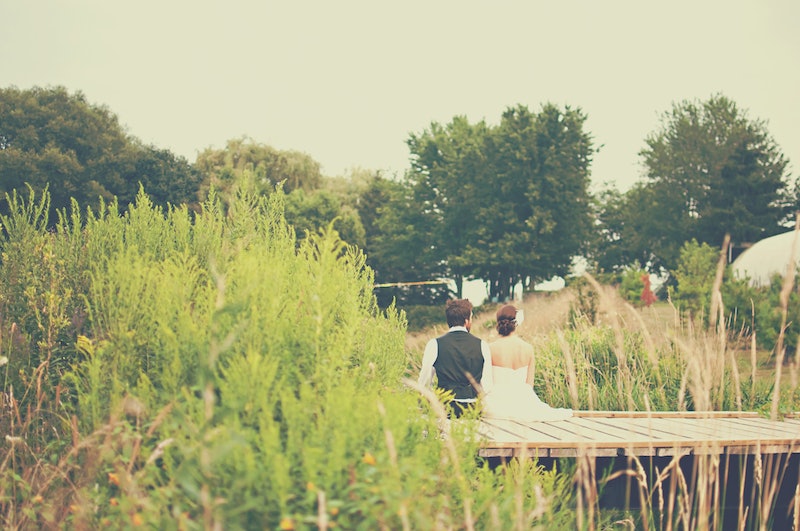 I've been married for two years. It is both exactly how I thought it would be — everybody wonders when we're going to buy a house, I still need prodding to do dishes, we both continue to smooch disgustingly in public — and oddly different, in that there's a serenity and security I hadn't expected to feel. (There is, however, also a bunch of paperwork about spousal visas, so it all evens out before anybody can get smug.) However, I've encountered some pretty well-entrenched myths about marriage since tying the knot— and have found myself wondering if there's any truth in any of them. At all.

Surprise: the answer is generally "nope". Marriage is a gigantic bundle of societal assumptions, and while we may think we're all modern and enlightened nowadays, it's only a very brief period of time since a woman was essentially a man's legal property after a wedding. The myths about marital happiness, sex, and cohabitation seem to have come from anecdote, folklore, and presumption rather than from any solid fact — but they've taken such a hold on the way in which we think and talk about marriage that it's quite hard to shake them free. Hence where science comes in.

When somebody starts to talk trash at your bachelorette party about how your partner will start preferring TV to your naked self after a year of marriage, shove this in their face. If they coo about how happy kids will make you, print this off. If they take an argument with your spouse as a sign that you're immediately divorcing, pin this to their forehead. The statistics don't lie.

This is one of the most hackneyed myths about marriage — it's the reason behind over-sexed Vegas bachelor parties. Once the ring goes on, apparently, the slobby pajamas start to creep into the bedroom. The reality, though? Stop feeling sympathy when you get the thank-you note for your wedding gift in the mail. Married people actually have more sex — and not just in the honeymoon period.

The Kinsey Institute — named for Alfred Kinsey, 1950s surveyor of America's sexual behavior — compared the amount of sex people were having in 2010, whether they were single, in a relationship, or actually married. It's a pretty spectacular difference: 24 percent of single women who were between 25-29 reported having sex "a few times per month to weekly," but 43 percent said they hadn't had any in the past year. Married women of the same age? A whopping 35.2 percent of them said they were having sex 2-3 times a week.

And the difference continues as we age. In the 40-45 year old bracket, 46.6 percent of women who were married reported getting some almost weekly, while even those with unmarried partners couldn't match it.

The idea that babies bring couples closer together lies behind the idea of the "bandaid baby," where couple strive to get pregnant to make a troubled relationship smoother. Unfortunately, it seems as if — at least in the case of a first child — marital happiness widely plunges after the bundle of joy arrives.

A new report released this August showed that the birth of a first child wreaks more emotional havoc on a marriage than divorce or a long period of unemployment. The Canadian study showed a huge dip in marital happiness after the birth, and the researchers hypothesized that this difficult "transition to parenthood" was behind why many people in the developed world have fewer children than they'd initially aimed for.

A study from 1980 to 2000 studied thousands of couples and their conflict levels, and found that the amount they argued at the start of their marriage stayed pretty constant over time. If you're the arguing kind, that's likely how it's going to stay. But having an entirely peaceful marriage doesn't guarantee that it's going to last; instead, the science says it's all about the way you argue.

It seems, according to a groundbreaking 1989 study about arguments, that prioritizing keeping the peace over actually resolving issues is much worse for a marriage in the long run. Couples who are in it for the long haul, the science says, know how to argue well: they're respectful, they don't get personal or petty, they don't whine, nag, or get defensive. And when things in their lives go badly, they're able to deal with it — and argue in a way that will release aggression and lead to productive changes.

Myth #4: Marriage Is More Or Less The Same As Cohabitation

One argument against getting married tends to be that it doesn't mean anything — that it's essentially the same as living together and sharing a bank account. But the statistics show that isn't necessarily the case.

Let's go back the Kinsey Institute stats: partners, compared to husbands and wives, had proportionally less sex all the way up to the 50-59 age bracket, where they spike slightly (possibly as a result of people divorcing and getting into new, unmarried partnership), and then fall back again. And according to a 2010 study in Britain, 80 percent of couples who married in 1991 were still married in 2001, while only 60 percent of cohabiting couples had lasted the distance. That, of course, is probably because people now cohabit even when they're not completely serious or aiming for a future together — but it's still a demonstration that, for better or worse, marriage is seen as more permanent.

Myth #5: Living Together Before Marriage Makes For A Happier Union

Living together before marriage (or instead of marriage) is the new normal. According to statistics released in 2010, 48 percent of straight ladies between 15 and 44 said they'd lived together with a partner without marrying them first. It's a gradual upward trend; in 1995 only 34 percent of women said the same. But is living together first as good for marriage as people say it is? You do get to know a person's foibles about milk placement in the fridge and weird habits concerning hair removal before you go ahead and say "I do" — but it may not be as excellent for the relationship as it's made out to be.

Statistics about the topic are actually pretty interesting. The ones compiled by the U.S. Attorney Legal Services show that divorce is strikingly more likely for people who cohabited before marriage; the statistic that's been bandied about is 33 percent higher likelihood of a split-up. But a more nuanced study reported in The Atlantic in 2014 thinks the culprit might actually not be cohabitation at all — at least, not entirely. It seems to be age. If you cohabit and/or get married before the age of 23, your chances of divorce are pretty high, at 60 percent — but if you wait till 23 or over to move in and make further commitments, it drops to 30 percent or so.

So being of appropriate age, and more able to make mature decisions, is a big factor in the success of your cohabiting or marriage. As is arguing well, not freaking out over a baby (or not having any at all), and having lots of sex. Sounds good to me.

More like this
The 19 Best Tweets & Memes About Bisexual Awareness Week
By Lexi Inks
Are Quality Time & Gift-Receiving Love Languages Compatible?
By Lexi Inks
Why A Libra & Libra Couple Might Become Codependent
By Kristine Fellizar
30 Clever Ways To Slide Into Your Crush's DMs
By Griffin Wynne, Carolyn Steber and Lexi Inks
Get Even More From Bustle — Sign Up For The Newsletter