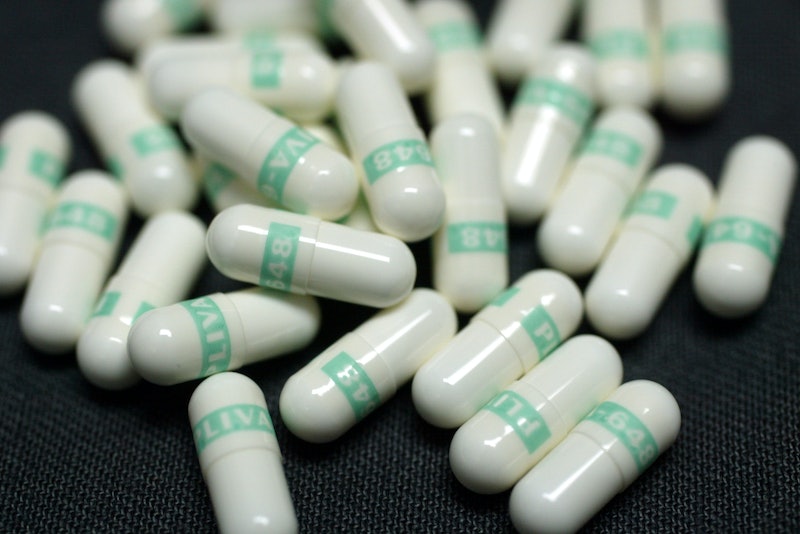 Selective serotonin reuptake inhibitors (SSRIs), more commonly referred to as antidepressants, are some of the most commonly prescribed medications on the market today; second only to analgesics (drugs to manage chronic pain) and cholesterol medications. One in every 10 Americans is currently taking some sort of SSRI; most of these people are suffering from a psychiatric disorder, such as depression, obsessive-compulsive disorder, chronic anxiety, or an eating disorder. However, others have been prescribed these medications for off-label uses. This means they take SSRIs to treat an unrelated condition, such as irritable bowel syndrome or migraines. Overall, SSRIs are said to be safe and effective. That said, it's important to be aware that SSRIs come with potentially harmful side effects. Most of us know about some of the short-term side effects — but what about the long-term side effects of taking antidepressants?

The chemical changes that antidepressants cause in your brain can result in weight gain, mood disorders, gastrointestinal issues, headache, dry mouth, and even emotional numbness. These are considered short-term, normal symptoms, though, and don't necessarily alter your life in the long run. Should you and your doctor decide it's time for you to stop taking your antidepressants, these side effects will likely disappear. But it's essential for you to understand how taking SSRIs influences your body and mind in the long-term.

Dr. Ben Weinstein, an associate professor of psychiatry at Baylor College of Medicine, tells U.S. News that there's a lot of controversy in the medical community concerning the long-term effects of SSRIs because they're being over-prescribed and overused. This doesn't mean they shouldn't be prescribed at all, but clearly, it's imperative that we take them (and their side effects) more seriously.

Read on for more information about the long-term effects of antidepressants, especially if you've been taking them for a year or more.

What Are The Long-Term Physical Effects Of Antidepressants?

Taking high doses of antidepressants over an extended period of time can lead to heart rhythm abnormalities and possibly frequent seizures. According to Dr. Dost Ongur, chief of the psychotic disorders division at Boston's McLean Hospital, although there isn't a tremendous amount of research on this topic, it's definitely a concern among medical professionals.

A study published in the Journal of Clinical Psychiatry states that long-term users of SSRIs are also at a higher risk for developing Type 2 diabetes. The likelihood of developing this particular condition depends partly on overall health, (such as your weight, lifestyle, and family's medical history) but ultimately, anyone who takes SSRIs is at higher risk for diabetes. Additionally, Dr. Charles Raison of Emory University told CNN that the weight gain from some of these drugs could lead to more serious problems (such as heart disease) that wouldn't have existed prior to their usage.

It's important to take into account, though, that people suffering from clinical depression (many of whom are prescribed SSRIs) are naturally at a higher risk for heart attack or stroke, so it's tough to know whether SSRIs are the real culprit for these heart problems.

Even after going off of SSRIs, the brain's neurotransmitters will be accustomed to functioning in a certain way. It's difficult for the brain to revert back to how it functioned before, and this leads to a discontinuation syndrome, or withdrawals. It's also worth noting that discontinuing SSRIs can lead to difficulty with digestion, disrupted sleep patterns, and tremors for weeks or even months.

How Do They Affect Suicidal Tendencies?

Researcher Peter C. Gotzche participated in a debate in the medical journal The BMJ about the risks and benefits of antidepressants. According to the data he gathered, individuals who are administered these drugs over a long period of time were 15 times more likely to commit suicide than the Food and Drug Administration (FDA) claimed. The FDA conducted earlier studies with 100,000 people concluding that taking antidepressants made people twice as likely to experience suicidal thoughts or attempt suicide. Gotzche and his team argue that the risk is even higher than that, though. Researcher Allen Young says, although the risk is present, it ultimately depends on the individual.

SSRIs themselves don't cause people to have suicidal thoughts, but they do help patients regain energy and become more active in the thought processes that existed before they were prescribed SSRIs. So an individual who had previously been considering suicide may experience more of an urge to carry out the act.

Additionally, suicidal thoughts don't necessarily stop after someone goes off their SSRIs. These feelings could last up to 12 weeks after discontinuing medication, and they could occur alongside increased anxiety and exacerbated irritability, too. Experts say these side effects shouldn't completely discourage you from going off your antidepressant if you really feel like it's the best decision, though, because they'll eventually subside.

What Are The Long-Term Sexual Side Effects?

Men also face these problems when taking SSRIs for an extended period, because the drugs inhibit erectile function and severely delay ejaculation. However, drugs like Viagra and Cialis are prescribed to counteract the negative sexual side effects of SSRIs in men. Since Flibarensin, (commonly called the female Viagra) is still brand new, we don't have enough information to know how it interacts with antidepressants in women.

What Happens If I Take Them While Pregnant?

Fifteen percent of pregnant women are diagnosed with depression, and one third of them are sent home with Prozac, Zoloft, Wellbutrin, or other SSRIs. That means roughly 200,000 American women are taking antidepressants while pregnant. Dr. Anne Andrews and a team of researchers from UCLA, Penn State University, and the University of Texas Health Science Center conducted studies on mice to find out whether these drugs have any lasting effects on developing fetuses. Their results were published in a 2014 issue of the medical journal Neuropsycopharmocology.

The mice who were exposed to Lexapro or Prozac during their third trimester faced permanent changes in their serotonin neurotransmitters. Antidepressants reduce levels of the SERT protein, which leads to more serotonin (the happy chemical) in the synapses of the brain. But this enhanced neural communication took place in excess — the researchers saw a condition arise called hyperserotonemia, which is basically a harmful amount of serotonin floating around in the brain. Because of this, in their adult years, the mice experienced more anxiety-heightened behavior.

The results that stemmed from Lexapro and Prozac were slightly different, the former causing less anxiety than the latter, but the takeaway was clear: babies influenced by SSRIs in the womb see lasting, potentially negative changes in their brain chemistry.

Can These Effects Be Avoided?

Dr. Ongur says most of the negative, long-term side effects of SSRIs occur because the drugs are not used properly; but most researchers agree that the solution is not to suddenly stop taking your pills, either. Asking your doctor for an estimated time frame regarding how long you should take the drugs will give you more bodily autonomy while also allowing you to weigh out the pros and cons of SSRIs on a trial basis.

If you think medication is the best option for you, and you're struggling with the side effects, talk with your doctor about either adjusting your dosage or combining it with other prescriptions that could safely reduce your symptoms. Also, remember that you can always request to try a different antidepressant. Or, look into alternative treatment methods, such as diet and exercise.