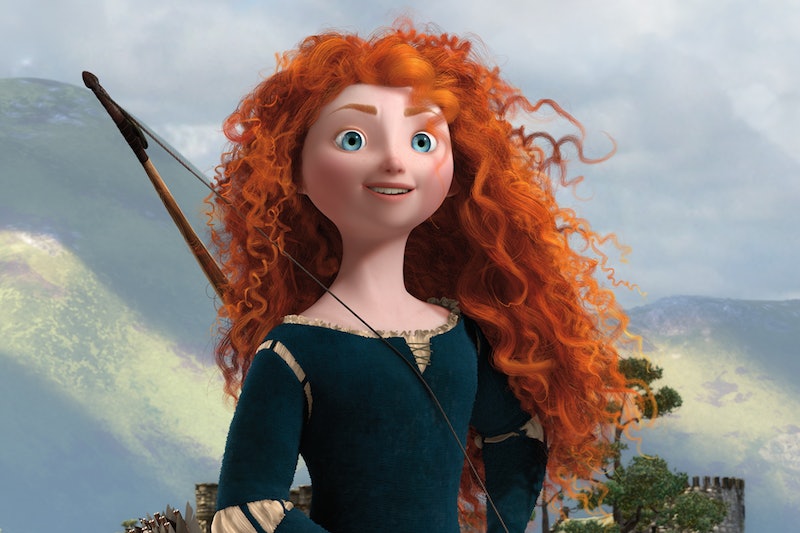 When it was announced that Merida from Brave will appear on Season 5 of Once Upon A Time, I jumped for joy because there are few film characters (Disney or otherwise) who I love quite as much as this plucky, arrow-wielding princess. I never thought I could love a Disney princess more than Belle, but Merida's story was such a refreshing departure from the typical formula that she won me over instantly. Merida is Disney's best feminist princess thanks to her fierce independence, courage, and refusal to conform to any stereotype that doesn't suit her. Plus, she could definitely give Katniss a run for her money in an archery match.

Although the "princess who doesn't want an arranged marriage" plot device has been used countless times, Brave took it in a way more interesting and progressive direction. Instead of focusing on a princess who longs to find her own true love, the movie focuses on the relationship between Merida and her mother — which is really unique considering most Disney princesses don't even have mothers, so that important relationship usually gets totally ignored. Brave successfully illustrates how forcing gender stereotypes on a young woman can negatively affect a family (although not every mom gets turned into a bear during the conflict, I'll admit). But, more importantly, it shows how the mother-daughter relationship can be mended through patience, courage, and love.

When I watched Brave for the first time, I silently prayed to myself that Merida wouldn't happen upon some strapping, archery-loving lad in the woods and then end up reaching some happy compromise with her mother about marrying who she chooses. Because, really, I just wanted a princess who is perfectly content to be #TeamSingle. Luckily, I wasn't disappointed — at the movie's conclusion, Merida was shown to be perfectly happy enjoying her newfound bond with her mom and engaging in her favorite hobbies.

Although there's no Brave 2 on the horizon, we haven't seen the last of Merida. While I jump for joy over her Once Upon A Time stint, let's take a look at why she's Disney's best feminist heroine:

1. She Refused To Conform To The Princess Stereotype

Even before the arranged marriage drama ensued, Merida made clear that she had no interest in forcing herself to fit into the stereotypical "princess" mold when it so clearly wasn't who she was meant to be. She preferred archery, horseback riding, and spending time in the woods — and no one was going to stop her from embracing her passions.

2. She Took Matters Into Her Own Hands

When Merida's mother, Elinor, initially refused to respect Merida's strong aversion to being married off, she didn't just sit back and let her future be determined for her. Instead, Merida took matters into her own hands and set off into the woods by herself in search of a solution. Sure, her plan to "change" Elinor backfired in a major way — but it left us with the great lesson that messing with a witch's potions could potentially lead to accidentally transforming your mom into a bear. You know, real life stuff.

3. She Didn't Rely On Anyone Else To Fix Her Mistakes

When the spell went awry, Merida didn't rely on anyone other than herself to fix it. As she and Elinor (in bear form, of course) set off in search of the witch to reverse the spell, Merida fended for both of them in the woods by finding food and shelter. When her understandably confused father attempted to kill Elinor because, you know, she looked like a fierce bear, Merida grabbed a sword and protected her mother. In so many movies, Disney and otherwise, women are left to just sit back and watch the action — but Merida never shied away from it or expected someone else to do the rescuing.

Sure, we've seen Disney princesses reject the idea of arranged marriage in favor of finding "true love." But in an era when many girls and women still view singleness as a flaw, I can't applaud enough over the fact that Merida made clear she just wasn't interested in suitors. When discussing the idea of marriage she even noted that, "I may never be ready for this." There are plenty of girls and women (*raises my hand*) who enjoy being single and can sometimes feel ourselves being silently (or not-so-silently) judged for it. Furthermore, the fact that Merida didn't end the film coupled off meant that her last scenes focused on her relationship with her mother — because that's a super important relationship in a girl's life.

OK, so technically Merida's fans had to help her with this because, you know, she doesn't actually exist in real life — but it illustrates how much viewers value this amazing heroine. As you may remember, there was outrage in 2013 when Disney attempted to give Merida a "sexy" makeover right before her official coronation. They made her skinnier, dressed her in a sparkly gown, de-frizzed her hair, and even took away her signature bow and arrow. The decision was reversed due to the outcry and Merida went back to looking like her original, perfect self — just the way she would have wanted.

It shouldn't have taken Pixar 17 years and 13 films to give us a female protagonist, but at least we can rest assured that Merida will go down in history as a groundbreaking character because she's Disney's most feminist princess yet.

More like this
'The Princess Diaries 3' May Go Ahead Without Anne Hathaway
By Darshita Goyal
Then Vs. Now Photos Of The 'Enchanted' Cast In 2007 & The Sequel's Stars In 2022
By Marina Watts
See 'Twilight' Stars Together Again For A Sweet Cullen "Family Reunion"
By Stephanie Topacio Long
How The Thanksgiving Episode Of 'Gossip Girl' Changed Pop Culture History
By Gabrielle Bondi
Get Even More From Bustle — Sign Up For The Newsletter