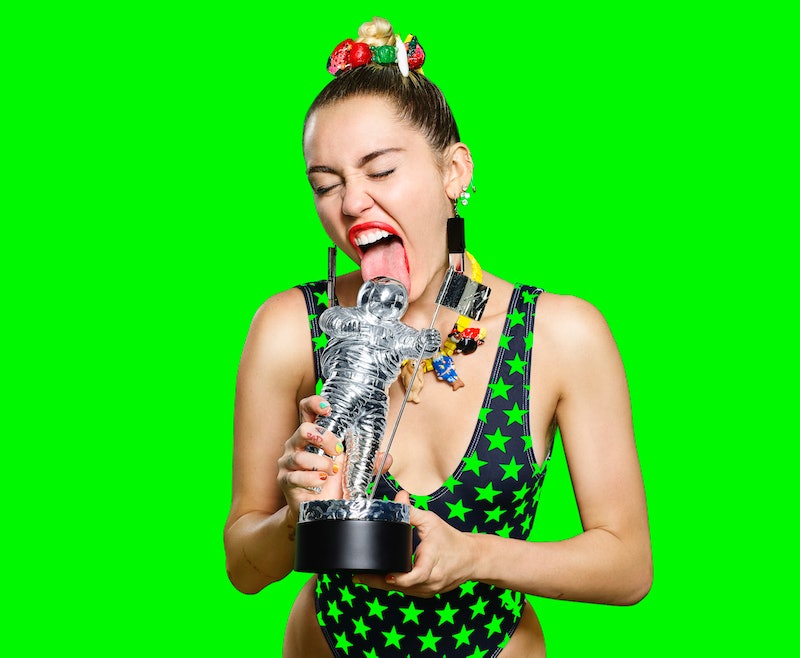 Never one to turn down a spotlight, Miley Cyrus is hosting the 2015 MTV Video Music Awards on Sunday, Aug. 30. There's always considerable pressure on the host to make an awards ceremony feel fresh and irreverent. Fittingly, Cyrus is the current patron saint of irreverence, and promised The New York Times that the show will reflect her personality and aesthetic from start to finish. But when she takes the stage, Cyrus will officially join a very exclusive club — the club of former VMA hosts. Whose legacy will be the toughest to live up to? I ranked every single person on the VMAs hosts list to find out.

The very first Video Music Awards ceremony was broadcast in 1984. Since then, MTV has tinkered with the format. The role of the host (or hosts) changes depending on who's at the mic. Stand-ups do stand up, actors do sketches, and others just throw from presenter to performer and back again. The VMAs have been hosted by single celebrities, couples, and groups; and for a handful of years (including 2013 and 2014), there was no host at all. When present, the host can have a huge affect on the night as a whole. Here's how each past VMA host stacks up.

A post-Heathers Christian Slater emceed the VMAs in 1993. His opening monologue included a plea for the audience to get naked, a run down of all the female artists and VJs he found sexually appealing, and his wish that the opening Madonna performance could have run longer, even though he "ran out of quarters." MTV knew to never let him host again. NEXT.

I just realized that if Miley Cyrus had to recreate a past VMA host's material shot-for-shot, it'd probably work best with the Roseanne star's 1994 performance.

2001. Rehab jokes about Mariah Carey and A.J. McLean; sexuality jokes about Elton John and Eminem; and pedophilia jokes about Michael Jackson: with these Foxx created the "Try Harder" trilogy, so I'm not surprised the smart people at MTV never invited him back.

Black fared better in his 2002 hosting of the sketch-heavy MTV Movie Awards. Back for the 2006 VMAs, he confused fans by showing up dressed as a character from an obscure video game.

Diddy hosted the VMAs in 2005, when Making The Band was in its prime. The show was all Diddy decadence, and it actually worked.

The 1992 show let Carvey trot out all his recurring SNL characters, and I'm not complaining.

Once upon the 1980s, Music Television was ruled by the mighty VJ. The crew, including Downtown Julie Brown, Martha Quinn, Dweezil Zappa, and more, shared the VMA mic in both 1986 and 1987.

Handler brought her caustic, celebrity-baiting wit to the VMAs in 2010.

Former SNL Weekend Update anchor Dennis Miller had control in 1995 and 1996, and his dry humor killed.

They were the first ever hosts of the first ever VMAs, and I'm in love with this bizarre pairing. They should have to make every public appearance together from now on.

Fallon foreshadowed his late-night dominance by handling the 2002 VMAs with his signature enthusiastic goofiness.

The most recent VMAs host the show has had, Kevin Hart capitalized on his rising star by emceeing in 2012. In his sharp monologue, he resisted the urge to to turn celebrity scandals into easy punchlines, instead offering genuinely original, funny, and timely material.

Stiller was riding high in 1998, straight off of the gross-out comedy There's Something About Mary. He was savvy enough to call in reinforcements anyway; famous dad Jerry Stiller made a cameo in his show-opening monologue.

Russell Brand is the kind of comedian that can make fun of the celebrity audience in the theater and the pretzel-crunching nobodies audience at home and still walk away with everyone's adoration. He made his VMA hosting debut in 2008 and repeated in 2009.

Eddie Murphy hosted the second ever Video Music Awards in a grandpa sweater set. And that's just one of the reasons why he's a legend.

The gold standard. Chris Rock took the VMA stage in 1997, 1999, and again in 2003. And no other hosts' rapid-fire jokes got bigger laughs on stage or more repeats by the lockers and in the offices the next morning. Miley Cyrus? Challenge extended.

To complete your 2015 VMAs party, check out the video below for the recipe to glitter bomb cupcakes that would make this year's host proud.