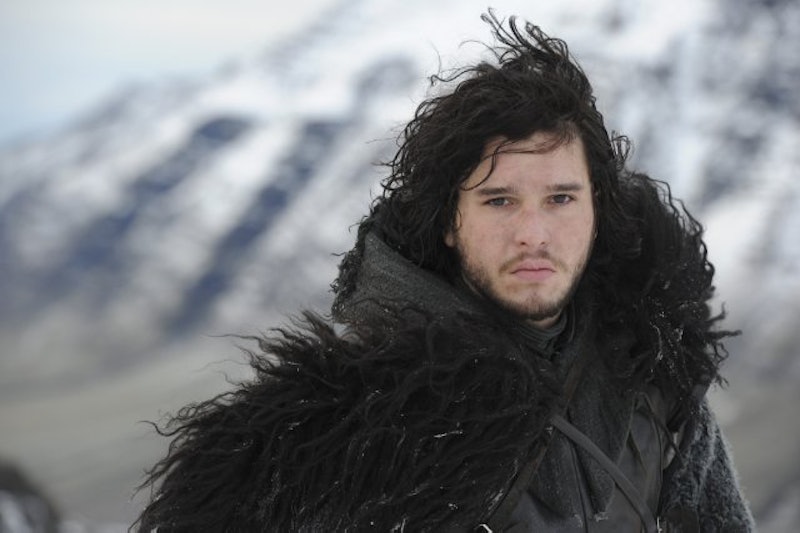 Everyone's favorite fan theory about everyone's favorite bastard has changed, at least for a few A Song of Ice and Fire fanatics. On Wednesday, Redditor Ghostchief revealed the identity of Jon Snow's twin in a — now removed — spin on the popular R + L = J fan theory. Spoilers and possible spoilers to follow.

At the close of Game of Thrones Season 6, Jon lies dead in the snow at the Wall, murdered by his fellow Night's Watchmen. Although actor Kit Harrington and HBO executive Michael Lombardo said the character was dead, fans quickly called BS after remembering that Harrington's contract with HBO lasts for at least two more seasons. Nice try, fellas, but practically no one believes Jon Snow is really gone for good.

Why? Because of the aforementioned R + L = J theory and the Azor Ahai legend. Early on in the series, we're told that Jon Snow is the bastard firstborn of Ned Stark, fathered while he was away campaigning with Robert Baratheon, who was engaged to Ned's late sister, Lyanna, who was kidnapped by Danaerys' brother, Rhaegar. ARE YOU WITH ME SO FAR? There's a whole lot of evidence to suggest that Lyanna wasn't kidnapped at all, but instead eloped with Rhaegar because they were truly in love. The public story is that Ned's sister died because Rhaegar tortured and raped her, but many fans believe she died giving birth to his child, Jon Snow, and made her brother promise to keep the baby safe.

Now the only two people who were present at Lyanna's deathbed were Ned and another man, Howland Reed. Howland hasn't appeared on Game of Thrones as yet, but you might remember his children, Meera and Jojen, who were with Bran Stark and company at the end of Season 5. Meera and her now-dead brother look nothing alike. In fact, she bears a pretty strong resemblance to Jon Snow. And did I mention they're the same age?

Ghostchief's take on R + L = J states that Lyanna Stark died giving birth to not one baby, but two, and that Ned and Howland split responsibility in order to keep her children safe. Star Wars fans may find this scenario familiar, because that's pretty much exactly what happened when Obi Wan Kenobi placed Padme's twins, Luke and Leia, in separate homes to keep them safely hidden from their father.

However, as The Huffington Post's Bill Bradley points out, if Ghostchief's prediction is correct, then the Game of Thrones plot starts to sound a lot like the Roman myth of Romulus and Remus. In that story, a princess named Rhea is part of a bloodline being killed off in a royal coup. After being impregnated by the god of war, she gives birth to twin sons, whom her uncle — the leader of the coup — leaves to die in the wilderness. Romulus and Remus are discovered and nursed by a she-wolf. They grow up, learn their true identities, kill the evil uncle, put their grandfather back on the throne, and found Rome.

So let's see. Rhea and Rhaegar are awfully similar names, and Lyanna was known as the "she-wolf" of the Stark siblings. A royal coup? The Seven Hills of Rome versus the Seven Kingdoms of Westeros?! OK, maybe that one's a stretch.

More like this
Netflix Shut Down 'Bridgerton' S3 Rumours About A “Very Dark” Storyline
By Bustle
Bill & Frank’s 'The Last Of Us' Episode Has Twitter Emotionally Wrecked
By Alyssa Lapid
We’ve Entered The Hot Boy Reader Era
By Samantha Leach
Jessica Simpson On The Time She Was Pursued By A Backstreet Boy & An *NSYNC Member
By The Editors
Get Even More From Bustle — Sign Up For The Newsletter
From hair trends to relationship advice, our daily newsletter has everything you need to sound like a person who’s on TikTok, even if you aren’t.