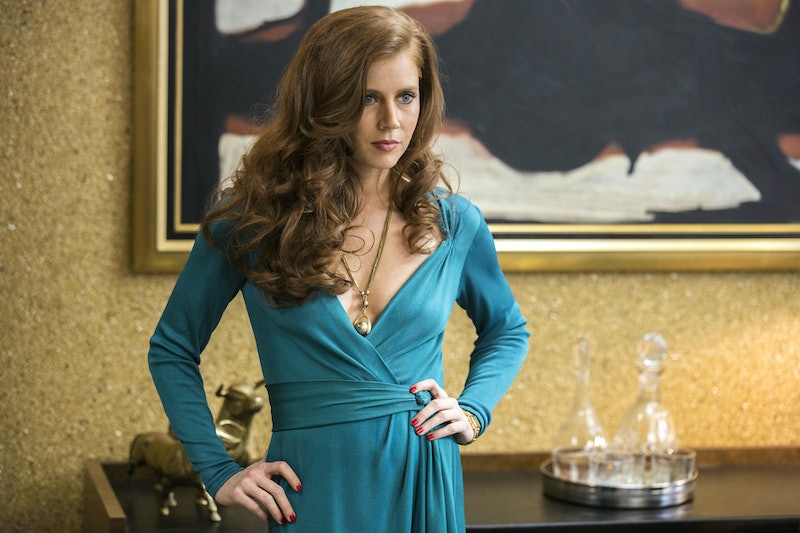 'Tis the season for Oscar buzz and American Hustle is raking it in. More specifically, Jennifer Lawrence is raking it in. Despite the cast David O. Russell's 2013 film has leading the way — Christian Bale, Bradley Cooper, Jeremy Renner, and Amy Adams — Lawrence is the one getting all the buzz. It all seems just a little uneven, especially in Adams's case: Why aren't we talking more about her performance?

A quick survey of American Hustle reviews makes it clear that Lawrence is the name leading the discussion. David Rooney at The Hollywood Reporter calls Adams "sensational in rare bad-girl mode" and describes her slinky '70s get-ups before praising Lawrence as "a sublime modern take on a quintessential screwball figure." NPR's David Edelstein writes that Adams uses her "blue eyes like stilettos" (though I'd argue the stilettos are more of a torture device for the wearer) and uses an entire paragraph to marvel at Lawrence: "Who could have dreamed, when Lawrence showed up as a grimly determined Ozarks teenager in Winter's Bone, that she had comic chops this spectacular?" Us Weekly simply declares Lawrence "the winner."

Still, not all critics and publications are drinking the Lawrence Kool-aid. It's clear that Adams, one of the actual starring members of the cast, is a force to be reckoned with on screen. David Denby of The New Yorker writes favorably of Lawrence and Adams, but is more concerned with the onscreen power created when these two incredible actresses combine: "When Adams and Lawrence, playing rivals for Irving’s [Bale's character] affection, meet at last, it’s literally a face-off, strength against strength at a distance of a few inches, and the screen explodes." Dana Stevens at Slate blatantly states that Adams' role is more interesting than Lawrence's and calls it "one of the more show-stopping arias" in an "operatic" film.

So why is this film, which showcases talents by both actresses (and the other actors on screen, for that matter) surrounded by such a Lawrence fest? Clearly, Adams — who was arguably the best part of 2012's The Master and whose performance in 2011's The Fighter was nothing short of intoxicating — is accomplishing something great in American Hustle. She's also the voice of the film, embarking on a seeming one-woman publicity tour and swinging by Late Night With Jimmy Fallon to play his goofy parlor games and chatting with Jon Stewart about her '70s era fake British accent in the film. Still, the words on everyone's lips are "Jennifer Lawrence." Hell, in her interview with Stewart, she spent half the time talking about Lawrence and referencing his interview with the Hunger Games heroine instead of talking about herself.

Of course, the culprit of this madness is the Internet. In a very simple sense, any chance to get the search term "Jennifer Lawrence" in a headline with a positive word and the name of a movie she's in is good for business — but I'm not suggesting that's why critics seem to genuinely love her performance. There's no doubt she's a great actress with the seemingly impossible ability to contort herself into whatever form a role demands, despite her relative inexperience. But in the same way that Lawrence's clumsy little stumble at the 2013 Oscars became the most mind-blowingly adorable thing the world had ever seen thanks to Tumblr, Twitter, and Buzzfeed, a great performance in a fantastic film is bound to garner the same wealth of overtures.

There have been theories that Lawrence is Katniss-ing us; that her unbelievably magnetic hold on critics, bloggers, grandparents, teachers, children, and teenagers with too much time on their hands is all some method of distraction from the harsh truths of our world. And it's true, whether or not she's created the pull with any real conscious effort in publicity sense, we are hers in mind and, for the moment, soul and you'll probably find her name in just as many headlines as President Obama. But does that love that runs so deep need to come at the cost of praising another actress who's earned this moment? Does Adams deserve to be obscured under the massive, immovable shadow of the woman redefining the term "America's Sweetheart"?

Obviously not. Adams is incredible — yes, I'm taking time away from Lawrence Talk to praise her. She's got a knack for conveying multitude of emotion with just a few wrinkles on her brow and the twitch of her nose. She's fearless in every role, whether she's frolicking in the streets of New York for a live action Disney movie or taking control of Phillip Seymour-Hoffman by giving him an aggressive hand job in The Master. By all rights, American Hustle should be Adams' moment, especially after being overshadowed by the admittedly talented men she's worked on her more recent films.

It's easy to wonder that if American Hustle had come out in the years before Lawrence won our hearts so resolutely, the chatter could have sounded a bit different. Might the narrative be that Lawrence "holds her own," rather than "stealing the show?" Might Adams be praised as the veteran actress showing Lawrence how it's done? After all, the general consensus is the same: Adams and Lawrence are both phenomenal. Perhaps Adams' rightful praise for her performance would get a little more breathing room if we were a movie-loving people who weren't so inclined to obsess over one shining beacon of greatness.

But, alas, until Lawrence stops being the Beyoncé of the film world, we'll just have to praise folks like Adams for taking this gross injustice in classy, unperturbed stride and dream of a world in which there can be more than one golden girl at a time.

More like this
Sandra Bullock, Girlboss Extraordinaire
By Matt Harkins & Viviana Olen
Twitter Has Very Mixed Feelings About The New 'American Idol' Winner
By Jake Viswanath
Twitter Is Upset About The 'American Idol' Top 3 Results: "Who TF Is Voting?"
By Jake Viswanath
Shocked Fans & Former Co-Stars React To Ray Liotta’s Death At 67
By Grace Wehniainen
Get Even More From Bustle — Sign Up For The Newsletter