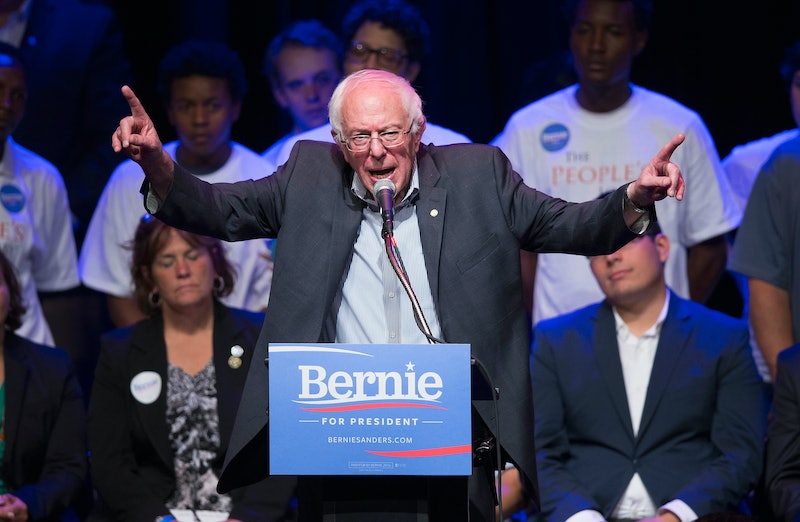 Back in June, Democratic presidential candidate Bernie Sanders said in an interview with Christian Science Monitor that despite not being particularly religious, he is proud to be Jewish, and that being Jewish taught him what politics is really about. In saying this, Sanders made a significant remark about Adolf Hitler that has since begun circulating on social media.

These references to his religion, according to the Monitor, resulted at least in part from an NPR interview in which host Diane Rehm mistakenly stated as fact that Sanders has duel citizenship with Israel. However, as the Washington Post points out, Sanders' statement about Hitler — which has gotten over 150,000 notes on Tumblr — is not entirely in line with historical events.

By 1932, Hitler had managed to secure German citizenship, and he ran for the presidency against President Paul von Hindenburg, who was approaching the end of his seven-year term. In both the original election and the run-off, Hitler placed second, so Sanders was mistaken when he said that Hitler won an election in 1932. Let's take a closer look at the history: During this time, the Nazis had been gaining seats in the Reichstag (parliament), and Hitler demanded that he be appointed chancellor when it became clear that the formation of a government would necessitate the cooperation of either the Nazis or the communists. Hindenburg initially refused, but in January 1933 he realized he had no choice, and gave the chancellorship to Hitler.

After obtaining the position of chancellor, Hitler dissolved the Reichstag and called for new elections — but even during these new elections, the Nazis were unable to win a majority of the vote. Then, after Hindenburg died in 1934, Hitler abolished the presidency, and in a plebiscite vote that August, Hitler was able to obtain a 90 percent majority through a combination of intimidation and other tactics.

The Washington Post's fact-checker was accurate in the strictest terms, but choosing to assign "four Pinocchios" to Sanders for his statement misses its overarching point. Think about Sanders' work as a politician for a moment. He has pushed for the removal of private money from politics, obtains most of his support not from corporations but from individuals, and is calling for a political revolution.

Yes, Hitler was able to come to power as a result of violence and suppression. But Sanders' statement, while factually inaccurate, still illustrates the necessity of holding those in power accountable, and not letting corruption slide. He probably should set the record straight on this one, just to make it clear that he is not trying to "devalue the traumatic history of the era," but the historical inaccuracy of his statement does not negate the impact that his religion and family background have evidently had on his understanding of politics.