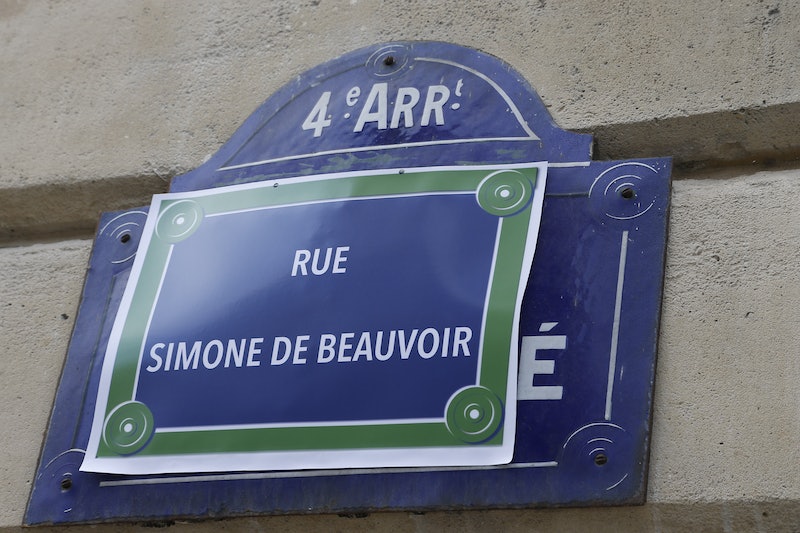 Despite the fact that women have made all kinds of amazing contributions to society, those contributions often have gone unrecognized — which, among other things, means that it's rare for anything to be named after women. But feminists in France are now "renaming" Paris streets after women in an effort to fix that — or at the very least draw attention to the inequality. Because it's high time we all stopped taking this very unfair status quo as natural.

Although it's common for Paris streets to be named for famous men, the feminist group Osez le Féminisme! (which roughly translates to "Dare Feminism!") notes that only about 2.3 percent are named for women, about 160 names in total. And among those, most are the wives are daughters of famous men. Women who are honored for their own intelligence, bravery, or mark on history are few and far between — and sometimes even women famous in their own right find themselves sharing space with their husbands.

For instance, Marie Curie, the famous physicist whose namesake street is actually named for both herself and her husband. The two did work together, but still. She's one of France's most famous and distinguished scientists, as well as the first woman to win a Nobel Prize, and the only person, male or female, to win two Nobels in different disciplines. If she doesn't deserve her own street, who does?

Osez le Féminisme! decided to fix this issue by "renaming" various Parisian streets, creating their own versions of the city's iconic blue street signs and sticking them up over existing signs all through central Paris.

"On the anniversary of 45 years of the Women's Liberation Movement, Osez le Féminisme! challenges Paris mayor calls on Paris mayor Anne Hidalgo to address the need to celebrate exceptional, and too often overlooked, women, in public spaces," the group states on their website. "Street names attest to our history: they belong to a political choice, revealing the values that the city wishes to embody."

The group used some famous names, such as Nina Simone, the American singer who spent the later part of her life living in Paris, but they tried to focus mostly on lesser known women who deserved more recognition. For instance: Sophie Scholl, a German anti-Nazi political activist who was executed by the Third Reich in 1943 at age 21; Elisabeth Jacquet de la Guerre, a French musician and composer from the 17th century; Jeanne Chauvin one of the first French women to be a lawyer who pioneered women's right to child support; and even several Americans like feminist writer Audre Lorde and scientist Barbara McClintock.

Osez le Féminisme! hopes that the city of Paris takes notice and begins naming more streets after women. Their goal is that by 2019 as many women are honored on the official street signs as there are men with the distinction.

And it wouldn't be a bad idea for the US to get behind that idea, too. Because street names aren't just street names. By disproportionately recognizing the work of men, and by displaying that recognition publicly, we create a skewed view of history and of the world, one where it's natural for men to do great things, and where women are simply absent. But by recognizing the many contributions women have made, and the very many women who have done great things, we can slowly begin to change that.

So here's to streets named after women! Cheers!